I bought Lenovo desktop and tried to download EU. It downloaded very slowly, and eventually it appeared for launch. When I tried to launch, it crashed and I attached the screenshot. I thought that maybe they didn’t allow me to download it to the second computer? No, I was told that I uninstall and reboot and reinstall it. So I did. But the same picture. I was able to download UE4.6.1, but cannot launch it.
I also checked my folder Program Files and I didn’t find UE4. Do is it a download problem… help please!

Thank you for your prompt response. Attaching DXdiag result screen one

Could you please post the logs from this crash and you DxDiag on here so we can see what is causing the error? You can find details on how to obtain the logs from the answer to this post.

Here is copy of call stack from crash reporter, which screen I attach again. Thanks.

It looks like I launch the UE4.6.1 but the attached screen is staying for few seconds and then crash into a screen with crash report.

Are you running the launcher version of the editor or the source version from github?

Thank you for asking, Adam Devis. I guess I run launcher, because I click at the icon in my desktop. I am just learning about github. Do you think I should try download the UE4 from there? I am not a code geek though.

Okay, I tried to run it from Microsift Visual Studio, and got stuck in the “build” step. Any suggestions, pleeeeeeease!

Can you verify your build via the launcher for me? To do so, start your launcher and go to “Library”. Then in the dropdown menu press “Verify”. This will check to see if any files didn’t get installed onto your computer for some reason and install them if they are not there. 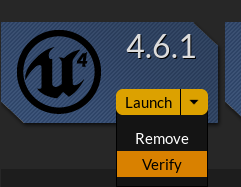 I did verify, but nothing came out of that.!
Then I tried to open a new project, at least it didn’t crash immediately as before.

but it crashed into error message I attach.
Where can you read the results of verification?

I was not able to create any projects yet. So I don’t have such folder that you requested.

I wish I could just share my screen via skype to you and show what’s going on (aigul.ina).

My computer is new, Lenovo, and has tons of power. I could run Oculus Rift, some demos and I never expected that the Unreal Engine won’t run. Now I don’t know if I should delete those UnrealEngine-release files, which I downloaded to try to run from visual Studio, and do two of the UE cointeract somehow.
Thank you for your time and consideration!

Don’t worry about the VS files, they won’t interact. Let’s just get you set up with the binary (Launcher) version of the engine.

Look in this folder and see if there are any crash logs:

If so, please zip and attach them.

If you can, please zip up the crash logs to the new project you opened into a .zip file and upload that .zip here so I can take a look. To get to the new project, please go to this filepath in your windows explorer:

In my folder C:\Program Files\Epic Games\4.6\Engine\Saved\Logs
I found only one file UE4_Win64_MonolithicHeaders_Success text document, in which there is only one record “Just a record of success.”
If this is any help?

You’ll need to paste that into the address bar (AppData is hidden), replacing “UserName” with your system user name.

Sorry for the delayed response, most of us were out of the office for the last few days.

Let’s see if you can launch the editor without using the Launcher. Try opening the UE4Editor.exe, found here:

Okay, my problem is fixed. My friend came and downloaded the latest graphic driver.
Thank you all for your efforts!