Since I’m a noob, I can’t make the leap from making objects tilt based on my device’s tilt and controlling my player. Ultimately, I’d like to get my scene started as a FPS scenario (but not with the gun). I’ve figured out how to drop the FPS BP class into the scene but haven’t yet been able to actually control the player.

Thank you if you have any insights.

Would you be able to create a new post about being able to control the player in the level? This will provide an update for anyone else attempting to solve the same thing you would be.

Any News on this subject? i’m trying to get on the tilt action but it only goes either up and down or right and left. Please Advise.

Any News on this subject? i’m trying to get on the tilt action but it only goes either up and down or right and left. Please Advise.

I am using a Samsung Galaxy Tab Pro and a Samsung Galaxy S4. The Build is 4.5.3. The setup i’m using is Tilt to get the movement to the rolling ball. Every time i apply the tilt function to the MoveForward Axis Mapping goes Up and Down, and whenever i add tilt function to MoveRight Axis Mapping goes Right and Left. If i put Tilt in the 2 it moves diagonally only. How do i make the tilt make the ball go Up, Down, Left and Right? I’m using 4.5 but willing to go up to 4.7 if needed.

this issue has been resolved since this was first reported. What kind of issue would you be having with your device or setup? What version of UE4 would you be using and is that version a source build or a binary build?

Any additional information would be greatly appreciated.

Would you be bale to share a couple screenshots of your Blueprint so I may be able to see what is occurring for you? This will be the best way for myself to debug this issue or help with your setup.

There is no blueprints involved, i just added the “Tilt” Key to the Axis Mapping under Input on the Project Settings. Small update: i tried upgrading to the 4.7 but the problem remains.

I have just tested this internally and have been able to see what you have been experiencing. This is working as intended though. If you add tilt to either MoveRight or MoveForward, It is only going to stay along those lines. You would have to set it up in blueprints to correctly reference the tilt of the mobile device.

Think of the mobile device as your keyboard keys. You press ‘W’ to move forward and ‘A’ to move left. If you move them both, you move in a diagonal. This is how tilt is being referenced by adding it to the Axis Mappings. Since it is added to both MoveForward and MoveLeft, this is why the diagonal movement is seen.

Please let me know if you have any additional questions.

hi there
im testing with my android phone huawei and samsung with tilt value, however, the Y axis always returns 0. do you have and clue about that?
thank you very much!

I’m still having this issue with samsung J7 Prime and blueprints. I’m getting only zero values. (2.24.2) 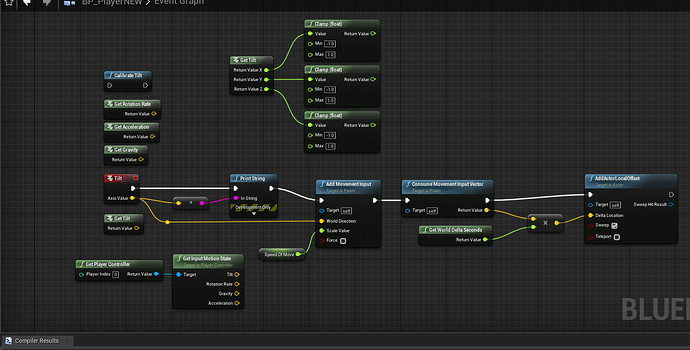 These include a standard dual analog control scheme, two options using tilt control in lieu of touch control for either movement or aiming, and a tilt-only control scheme. Results indicate that while touch-based controls offered the best performance, tilt-based movement control was comparable.