How to make zombie AI?

I Have the animations, i just want to make realistic zombie AI. i want the zombie to walk around and look for the player,
and if the player is in his line of sight i would like him to run towards the player and attack him. How would i do this?

Using the information found on the following two pages I was able to create a simple zombie style AI in a few hours. I was able to do it all in blueprints.

Disclaimer right up front. This isn’t complete, I’ll edit it to fill it out. Also, I’m on a slightly older build of UE4 and I’m not sure what’s changed with today’s version. Edit: In the tread that follows, Epic devs share many things about the UE4...

Thanks, i will give it a shot. But is there anyway u can set me up a simple blueprint example of the zombie following the player and when he gets close he attacks him

Here are some screenshots of the blueprints. This AI patrols an area and then follows the player if they get too close. After chasing the player for a certain distance, the AI will stop chasing and return to patrolling around the spawn point.

The behavior tree - This is the brain of the AI 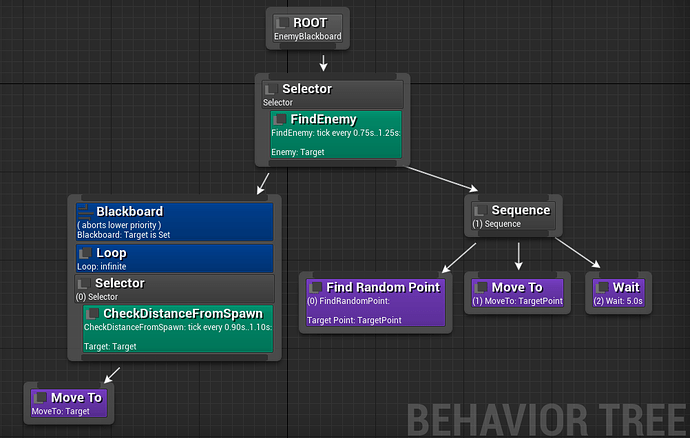 The Find Enemy service - See if there is an enemy nearby

I Set it up the zombies to just wander around, but they walk really fast, faster than i can sprint, is there a way to change their speed? and are the Find Enemy services and all the other ones u provided to me are seperate blueprints or is it all in one?

You can set the enemy walk speed in your Character Defaults for the enemy. I changed it from 600 (the default) to 150 to create a nice slow walk. Each one of the images above is a separate blueprint. The first two derive from BTService_BlueprintBase and the Find Random Point Task derives from BTTask_BlueprintBase.

the blackboard key ‘‘Enemy’’ come from where? and how i make its a pawn. Cause when i try to make the Find Random points or check distance blueprints, I cant make the Cast to Enemy1. I have the Blackboard with two key the target and the target point, i made the blueprint find enemy service with the struct (BlackBoardKeySelector) i nammed its enemy. I made the behavior tree without all the blueprints done.

Hi I am having to do a project similar to this one and have something very similar set up but i was wondering if there is a way to change the Ai speed when they see the player? sort of like a see player = run style thing, i have a basic blueprint set up so that it will set a Boolean to true when it sees the player but i cant get it to change the Actors speed after searching for hours, could you provide any insight?