How to connect two state machines?

We try to use 2 state machines in the same anim bp. Our setup is:

We kinda solved this problem adding to the machine #1 a dummy entry state and a conduit that leads to standing or sitting state without any blending (blend time set to 0). This is better but still the idle animation is restarted.

Is there some better solution to connect two or more state machines?

Somebody else having the same problem https://answers.unrealengine.com/questions/215497/possible-bug-in-using-two-anim-state-machines.html

Usually a state machine is used for locomotion, legs moving, and the AnimGraph used to introduced slot nodes and branch points as torso blends. The state machine can only, as far as I know, play whats called absolute animation and is why playing one will reset the other. The AnimGraph can play Additive animation, a Montage or blend space, using layered blend per bone. The flow direction then would be.

An example using punching instead of say reaching.

if it helps here is what my current AnimGraph looks like. 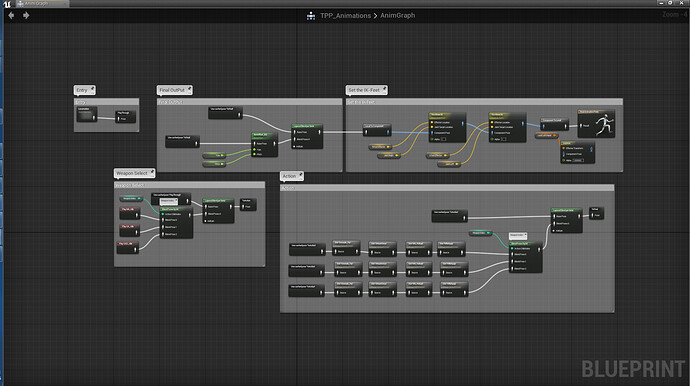 I started by doing exactly this for my hand animation. I had an enum variable “HandState”, a BlendByEnum node, a code that managed transitions between HandState values. And that worked. But then I realized that what I’m doing is exactly a state machine. So, I replaced my HandState variable by a state machine and moved some of the code in it’s transitions and some other in its events. It’s doing exactly the same thing, but it resets the Locomotion.

I tried the same thing with two very simple state machines, without any blend or montage, just simple anim sequences, it does exactly the same - resets the first machine. Unless there is some reason that I cannot see right now, I think it’s a bug.