how to animate camera but still look around

thank you so much!!! this is a great start and sort of working. i built a character with only pitch and yaw, didn’t set up w/a/s/d at all. gave the character a camera, placed it in the level and animated it with keyframes in matinee. i didn’t use a TargetPoint but my character instead. it’s working okay but it is very jerky
i feel like the event tick is making everything very jerky. is there anyway to have a smooth flow from frame to frame? anything i could use other than event tick?

Here I am using a Custom Event driven by a Timer set at Event Begin Play, which allows you to drive the exact time between update.

thanks so much for all the help. unfortunately i’m still getting the same problem where the animation is extremely choppy. what happens when i press play is, the animation runs it’s course, and then when it’s done, the player drops to the landscape and goes in one direction. when the player is going in this direction it is not jerky and everything is smooth. but it’s not what i animated and it just goes on and on forever.

i think what i’m not understanding is, is that i have the animation of my in game character set up in matinee to play on startup. why do i need to set actor location in order for the player to be in the location i animated for it already? also, is there any special reason why you’re using TargetPoints instead of the level character?

I think we are talking cross purposes. I was dealing with a tracked movement not controlled by the player at all. I think what you actually want to setup is a separation of the character’s pawn movement and the character’s camera movement. I would suggest digging into our first and third person character blueprints which should have exactly what you are looking.

thanks so much. by pawn movement do you mean w/a/s/d? i just don’t want to animate that and have the player use pitch and yaw on the mouse/oculus rift. i don’t understand why when i drag my blueprint character onto the level and animate it in matinee it doesn’t switch to that character when i hit play. it’s seems i created two characters. how do i animate the one that actually starts playing the game? i’m sorry i’m very new at ue4. this is like my 3rd day using it. i’m looking at the blueprints for the FPS but i don’t understand very much. thanks so much for all the help!

It seems you are wanting to just setup a player character. We have extensive documentation on this. Please take a look at the links below.

An overview for setting up a character.

A high-level overview of how to set up a basic character or Skeletal Mesh in Unreal Engine.

An in-depth video tutorial playlist for creating your own 3rd person character.

hi thanks. no i’ve already set up a player character blueprint. what i want to do is have that character float around the level on a spline or whatever while the user can use the mouse to look around.

OK! I think i have something i’m happy with. I was really fixated on using a camera and having the user control that. But Eric Ketchum’s method of just animating a targetPoint and setting those to the actor location works great. i have his second BluePrint set up now exactly. no jitters at all. You can add a targetPoint in the Basic section in the Modes menu. I was not familiar with them before. Thanks so much!!!

I also have a similar question, but I’m after a slightly different result. I’d like to use an animation from 3ds Max instead of Matinee, but my rotations aren’t working properly.

I’ve made an animated bone in 3ds Max and using blueprint I have attached my player pawn to it. It moves/translates fine, but when my animated bone rotates my player/camera stays facing the direction before the rotation. I can turn my head in VR and that works fine too, but it’s not adding the additional rotation so feels wrong.

Do you think that if I use the blueprint by Eric Ketchum it might solve my problems?

Your situation is a bit different but I think Eric’s setup should work. Give it a try and let us know what results you get. If it still isn’t working properly we can go from there.

Hello Eric Ketchum,
sorry for re-opening this thread, your answer worked for a situation where the level is only based on starting and ending the level this way. There are only 2 issues that would make this perfect. In my case I am making a river rapids scene, where the character falls off a bridge and is then sent on a precontrolled ride.

So far I have gotten this to work by being activated on a trigger volume. So my character falls and when he reaches the trigger box, the animated matinee trajectory begins, the problem is it would be great it once it was triggered the caracter could sort of “slide into place” from whatever area he landed (since it’s such a big fall there is no way to predict where EXACTLY he will land).

Right now the character automatically teleports to the start of the animation.

The other issue is ending it, it would be neat if the character could be released and able to play after the matinee at the point it ends (instead of warping to the beggining). Right now it just stays at the point where the animation ends and doesn’t move. Ive tried adding a trigger box at the end the both destroys the target point and even the matinee, but this doesn’t seem to work. What am I missing?

Thank you in advance for the help.

Well I would probably matinee the whole sequence from the moment the player gets knocked off the bridge all the way to the end with the character getting out of the river and then in Blueprints I would make sure that I set the Player’s new end location. It would help a lot though if you could give us a video of what you have so far so we can really understand exactly what you are looking for?

Thanks Eric Ketchum, that would work fine for the movement, but I was hoping I would still be allowed to control the camera with mouse look or even Oculus. To get around the camera solution I used matinee on a platform where the player lands. So far this sort of works but has issues with collision and the player not going where you want him to go.

Basically Mr. Ketchum your solution would work 100% except I would need mouse look.

You should have mouse or Oculus Camera control by default in this setup, unless you are going into Cinematic mode which you don’t want to do because that does limit player control.

If that’s not the case, can you post a screenshot and I will look into what needs to be added?

Hello Erick I’m sorry I’ve been working on this so long, I forgot what I was able to acomplish. You are right oculus does work. In fact all of it does, the only point is where you say to set the players new end location.

Ok so these are my steps so far in a test environment. 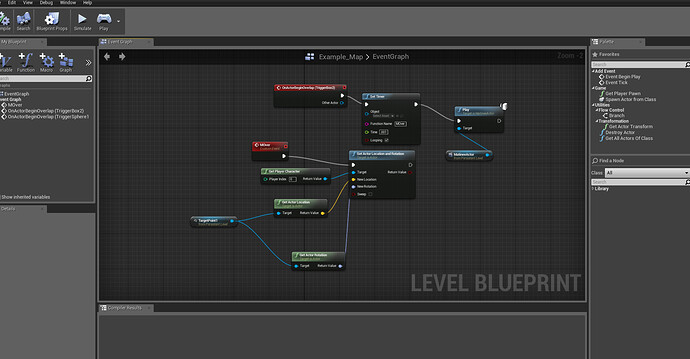 This is the blueprint I’m using, as you can see, instead of doing it from event play I do it from a trigger point.

When you hit the trigger point the animation takes you from here: 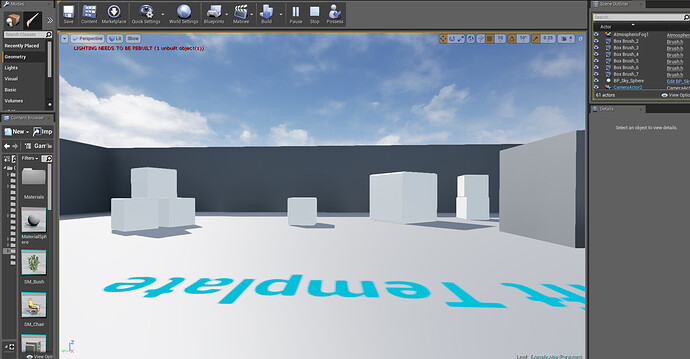 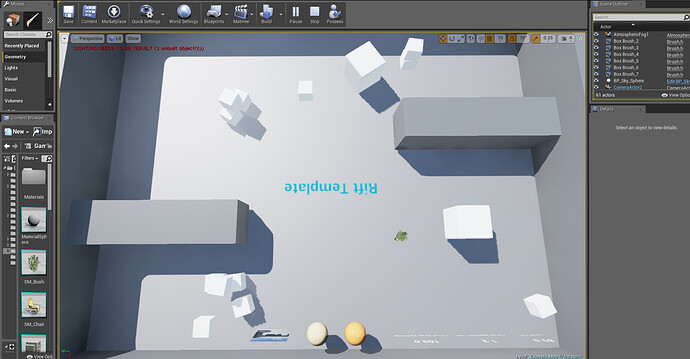 So far everything is fine, oculus and mouse look works. The problem is that once the character is up there, it just stays there. You can look around but the character will stay floating up there. He won’t be released and he will stay there forever.

When you say to set up the players new end location I sort of understand what you what me to do in theory, but I don’t know how to go about it.

I assume once im up there it’s an actual location with x,y and z coordinates and you somehow want me to respawn in that location. I just don’t really know what I would need in blueprint. Thank you btw, so far this is our best solution once it ends it will open some amazing doors.

as for what the actual location looks like, here are pics. 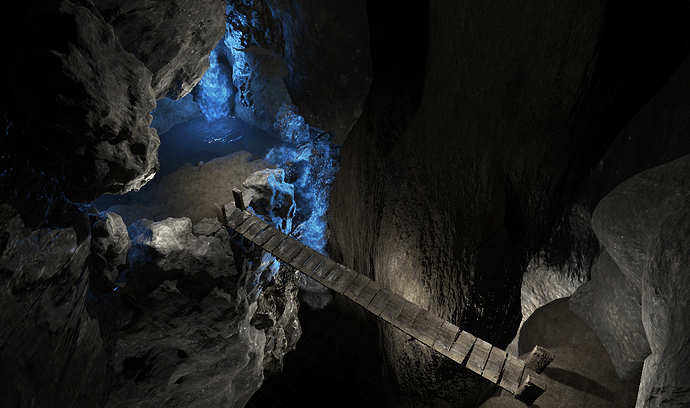 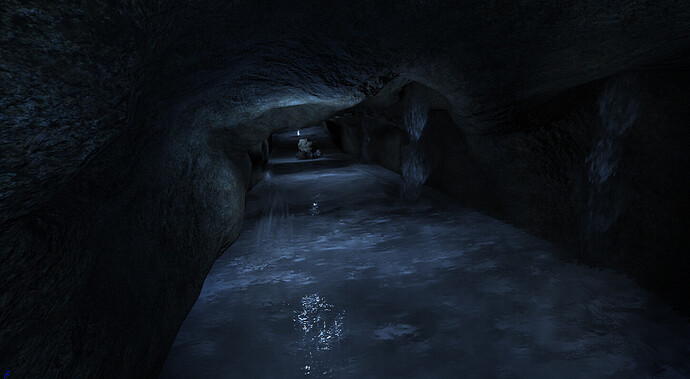 From the Level Blueprint you are showing, I am assuming that your target point is what is moved in your Matinee, yes? Do you have a separate camera and director group in your matinee?

Yes you are correct.

No, what I did in matinee was what I do to animate platforms. I assumed it would work in a similar manner, where I just animate the object and it moves to where I choose, where your method just attached the player to the object. I assumed the target point is an arbitrary placement thing, such as a null layer in other programs basically a marker for things. But I guess it has other functions?

I have never really used the director.

Here is my matinee: 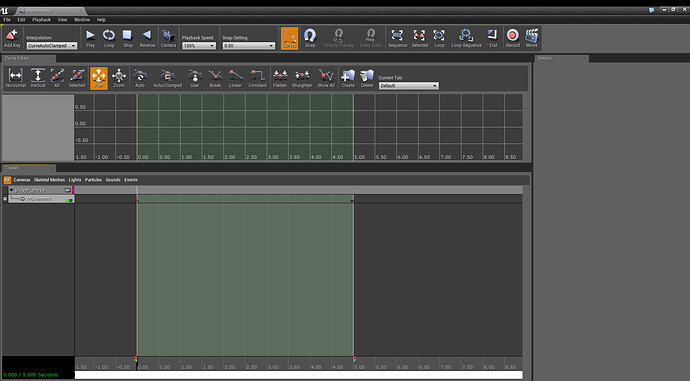 So I ended up doing it in a very weird way. I took to heart the idea you gave me about starting the matinee at the beggining, but I can’t get this method to work.

So what I did instead is, I placed a hollow blocking volume around the area where the matinee starts. It’s collision is off, but as soon as you enter it, you are basically locked inside a box. From here I animate the box and the character has no choice but to follow. This also has the bonus of giving me some wiggle room so the player doesn’t feel he lost total control.

So far this seems like an adequate, although very rough solution. Although I can use it plenty.

So with the help of this thread of managed to get something going. What i want to be able to do is for the player to be able to move his hmd around while the matinee is being animated on a path. Now i don’t currently have a headset to test with, but i am able to rotate my character during the animation with the mouse, although now I have the issue that i can’t look up and down with mouse input. Any ideas? Monday I’ll test with the headset and I have a feeling that the hmd will allow the look around since player cam is locked to hmd.

Oh, and i also dont have any wasd input once the matinee finishes… can look around both left right and up down.

My current level blueprint is as follows… 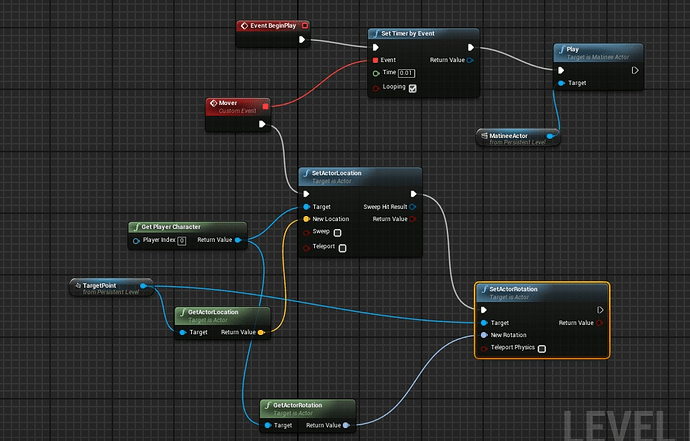 Hey everyone. I’m having a serious, but probably very simple problem you can solve easily but that is almost killing me in difficulty: how on earth did you animate the targetpoint? it seems like i cannot reference it anywhere and have no idea how to get it moving inside my sequencer (or matinee). It seems so simple but google didn’t give any results. I just want to have a simple VR turnable camera sequence as well…