How can I draw a spline drawn by the player's movements? 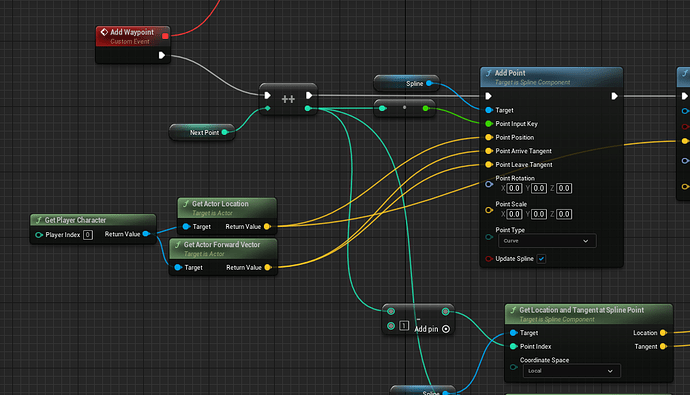 image1012×580 134 KB
So I a new actor with the spline generator blueprint in it and brought it to the world. I added “get character player” and connected it to get actor location and forward vector.

Seems to be not working unless I missed some steps

Could also be me not knowledgeable enough to do that XD

Hm. That should work. We sure there is a character in the world?

Is the character possessed?

Seems to be not working unless I missed some steps

So what exactly is not working? Are the nodes firing, is the character moving, can you print values, visualise the spline?

In your pic, you’re using local spline space instead of world: 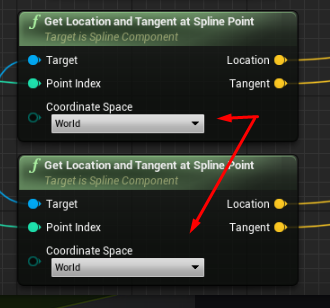 The nodes are firing. What’s not working is the possessed character is not generating the spline mesh which is something I want to achieve but having the spline generator in a seperate blueprint of the player bp.

what’s happening is the spline mesh actually spawns in the world although it wouldnt add points to the location of my character. It just sits in the world

I made progress!! It’s generating the mesh. I just didn’t see it. But the spline mesh is far away from my character when its generating. Anyways I think I can take it from here but would still accept help. Thank you!

Yo Yo it’s me with another complicated question.

Your spline works in my project. This is just nitpicking,
Everytime the spline generates, it looks like it is constantly adding points or extruding meshesh in wireframe mode. Resulting in looking like it is spawning the mesh every time it generates.

I saw this spline mesh component and INSTANCED mesh (Spline Mesh Components and Instanced Meshes for Faster Level Design in UE4 Blueprints - YouTube). They use scaling for this one. I’m wondering how I can combine your blueprint and their blueprint.

The goal is to generate the spline without looking like it is spawning mesh and lagging everytime.

So I tried doing this alternative one. I tried to add spline mesh component/set static mesh to my custom mesh but it doesnt generate a spline mesh in the world. Not sure why

How is it supposed to work?

The player runs around and another blueprint adds spline points and attaches spline mesh components?

that I already fixed. I got it to generate a spline mesh by creating star and end node next to the Add Spline Mesh Component.

Adding a new question here. I got a character with a surf board in one blueprint. I know I can get the player’s location by using “get player character”. But for this instance I want the end tail of my surf board to generate the spline mesh.

Right now with my spline mesh, if my character is too fast the spline mesh is having a hard time catching up with my character. I changed the time in the “set event tick” to 0.01 and it’s catching up but it is making a lot of meshes.

But you do not need a lot of points, you can update existing points and existing SMCs.

On the other hand, I don’t think SMCs are suitable for what you just described. This sounds like a job for the ribbon particle.

I basically want other players to be able to surf on to the spline mesh that my character generated. That’s why I think the spline mesh component is what I’m looking for. That’s my end goal.

My blueprint knowledge is not that great but when I saw your spline mesh generator it gave me hope lol. I’ve seen other people using spline mesh components but not in real time.

You may need to update the last 2-3 meshes due to the way tangens shift.

Collision on spline meshes is not great. Ribbon particle will not work here now that we know what you’re planning.

I’d probably start looking into procedural mesh if you want to dynamically build surface other characters can move on.

Unless you mean just a spline, and the SMC is just to visualise. That’s work well.

Thanks a lot dude! I will dig more unto this. Will definitely check procedural mesh.

I basically want other players to be able to surf on to the spline mesh that my character generated.

I would immediately abandon the spline approach. Procedural mesh.

Looking at Procedural Mesh, it looks like most people use the procedural mesh that’s from Lyra project in UE5.

Can I achieve the same goal where my character would be generating/extruding meshes like your spline generator mechanic?