Help updating an actor for each client?

“Multicast to clients” only appeared once. What does that mean?

it seems like your multicast is only happening on the server

delete the other 2 message functions

what does it say now?

I set up a quick example in blueprints just to double check.

This is how it should look: 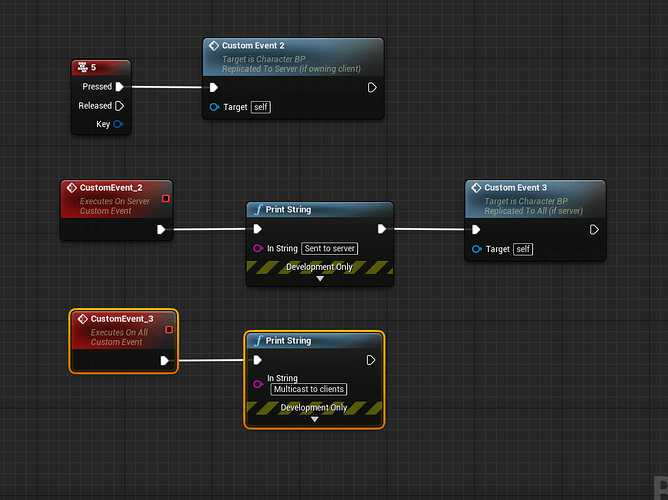 so when you press 5 on your keyboard, it should send 3 messages total,

1 from the server function and 2 from the multicast

for some reason you’re not getting the 3rd message

I’ll keep trying to figure it out. Thank you for your help so far!

I couldn’t think of any reason why this would be happening so at this point I would assume it’s some weird setting that is causing the issue.

First make sure you’re not doing 2 separate Standalone sessions. Be sure that you are running a listen server. 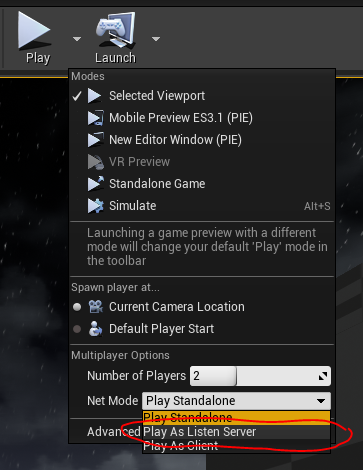 Then I would create a new PlayerController class and create a really simple function like what I did in blueprints above, (but do it in C++) and see if you’re able to get the multicast to execute on both server and client.

If it still doesnt work, I would assume it’s something with my project, then i would create a new project, and then try to get a simple function that communicates like it should

I did what you suggested to test if it was a problem with the whole project, and I got the same result as before: only one client gets the function. Do you know what could be causing this? Maybe another class? I have a custom gamemode, HUD, game state, and player state class, and the default pawn is set to “none” because the player doesn’t have an in-game character that they control.

You will have to do this logic on your Pawn class instead.

I googled “ue4 multicast playercontroller” and found a bunch of stuff, if you’re interested, you should read through some of it.
https://answers.unrealengine.com/questions/818293/calling-multicast-function-from-playercontroller-p.html

You should never use multicast for updating state on clients. Multicast should only be used for cosmetics that are only relevant in the given moment like particle effects etc.

You will have to do this logic on your Pawn class instead.

Ah, I see! So I could move the MovePiece_Client into a player pawn class? Since the only variables, it’s using are passed as parameters, it should be really easy to migrate it. Then I could just change the player controller’s MovePiece_Server function to call the multicast function that’s now inside of the pawn the controller it’s possessing?

Yea, it might be a pain moving all that stuff, but you just can’t call multicast functions on PlayerController.

Here’s a thread that explains the difference between OnRep and Multicast.

Use one or the other depending on if you’re replicating state or not. Multicast is fine if it’s being used properly, but if they’re being called so many times it lags maybe it’s time to optimize.

However I found the OnRep stuff to be a giant pain in the butt for a bunch of different reasons.

However I found the OnRep stuff to be a giant pain in the butt for a bunch of different reasons.

I just started programming a few years ago and I started on Unreal Engine.

I remember the documentation was really hard to find, and hard to understand(as a new programmer) and sometimes the OnRep functions wouldn’t execute when I thought they would. Eventually I found out that it won’t replicate the same value twice, but by that point I just wanted to get it working and again, I couldn’t find documentation or examples anywhere.

I guess it wasn’t so bad. A better way to say it would be : it was just easier to use RPC’s because you don’t need much documentation to understand how to use them.

So doing the stuff that I described should work? I.e. creating a new pawn class and using the parameters as variables?

yes, that should work

Thank you so much for the help!!

Hi, so sorry to unbury this topic, but it turns out that this actually didn’t fix it. The update function still only runs on the server and the client, and the reason I think this is is because the second player controller doesn’t possess the second pawn. They both exist in the world outliner, but for some reason, the player controller can’t find the pawn GetAllActorsOfClass() returns nothing when called in it.

Yea PlayerControllers are weird, you can only call Possess on the server. If you hover your mouse over the possess node, you can get a little info about it. Basically, you’re going to make a server RPC with your client’s PlayerController as the parameter.

So I’ll need to manually tell the server to tell each player controller to possess their respective pawn at the beginning of the game, and I can do that inside of a server function? Should each controller be looking for a pawn with a matching index and possess it?