Function pointers in Unreal compared to standard C++. Getting an unexpected error which I cannot reproduce without UE4

Anyhow, I’m trying to write a triggering gameplay system which works like this:

You have a trigger, can be anything, a volume trigger, a written button class which trigger something, a timed event or anything. That said trigger calls its trigger option class which only exists for the possibility of different usecases, some options at the top of my head: proxytrigger which instantly triggers, delayedtrigger which delays the trigger process, or something more complex like a trigger option that will only give you the OK sign if your health is 100%.

Once the TriggerOption tells the real Trigger that it’s been triggered, the TriggerAction will play, which can also be anything, a door opening perhaps? I wonder how many times I’ve said “trigger” by now … anyway, that’s the entire system. However, the process of TriggerOption telling TriggerActor (the actual trigger) that it should get triggered happens through a function pointer:

This is the function that calls it, or stores it or whatever this subclass wants to do with it, in this case, it just calls it.

This is also the typdef for the function pointer btw: typedef void(ATriggerActor::*VoidFuncPtrNoParams)(void);

When trying to call the function pointer, 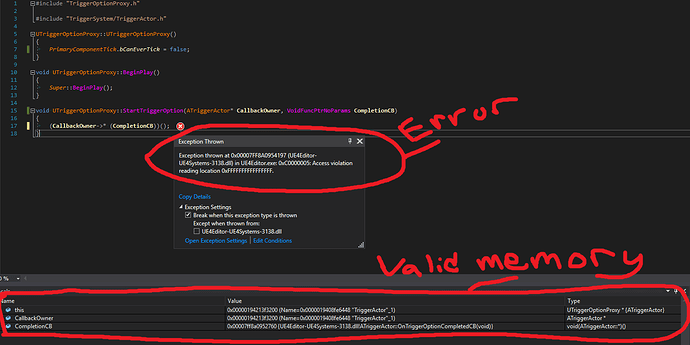 Im not sure i understod fully what you want, but seems to me you try to overthink this a little bit

What about delegates, timers, events, interfaces?

I know this is not what you asked, but maybe a good advice 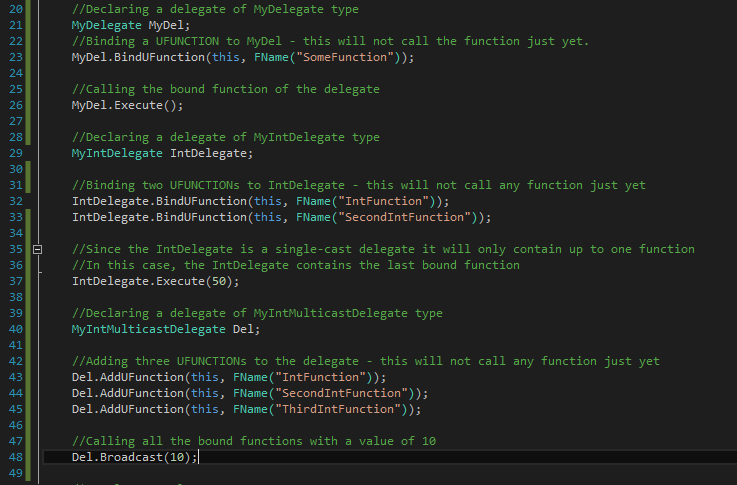 Delegates in C++ are used in a number of cases. However, in this post, think of delegates as pointers that point to specific functions. Having said that, through delegates we can call the functions that they are pointing to when…

Delegates that can be bound to multiple functions and execute them all at once. 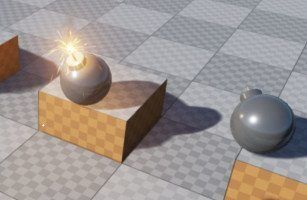 Unreal Engine Timers in C++. A quick tutorial on how to use timers and bind delegates with unreal engine in C++.