Hey,
I’m trying to when I shoot a target it does a linetrace to that target and then if its a valid target, look the nearest valid Dummy objects (of the same class blueprint) and then shoot a linetratrace to that object, and continue repeating it for an X number of times.

I managed to make it work shooting the first target (through the player character blueprint) and then it shoots to the nearest (dummy blueprint event dispatcher to level blueprint) but I can’t make it continue finding the next target. I’m pretty sure my problem is when I bind the event “Find Closest Object” (that is an Event Dispatch from the Dummy blueprint) I’m using Get Actor of Class (Dummies blueprint) and then it only works with the first object of that class it finds… And since I can’t bind an event to an Array I don’t know how to make the second dummy continue looking for the next closest dummy. I’m sure there is a simple way to do it but I’m losing my mind trying to figure out.

Does this make sense?

If I’m not mistaken, this has nothing to do with distance and more to do with order added to level.

In the blueprint you shared, I don’t see how you are comparing to get the closest one.

Hey! Thanks for the reply.
So my issue is not actually finding the closest one. I’m actually able to find the one that is closest to the first object I shoot…
My issue is to continue looking for the next one after the second because when this event fires again the “FindAndZap” custom event is bound to “Get Actor of Class”, which only gets the first object of that class it finds… so every time this event runs it only applies to that same object.

I will try to show step by step what I’m doing: 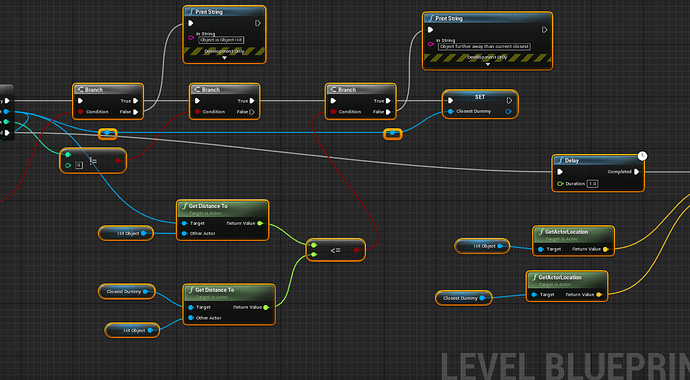 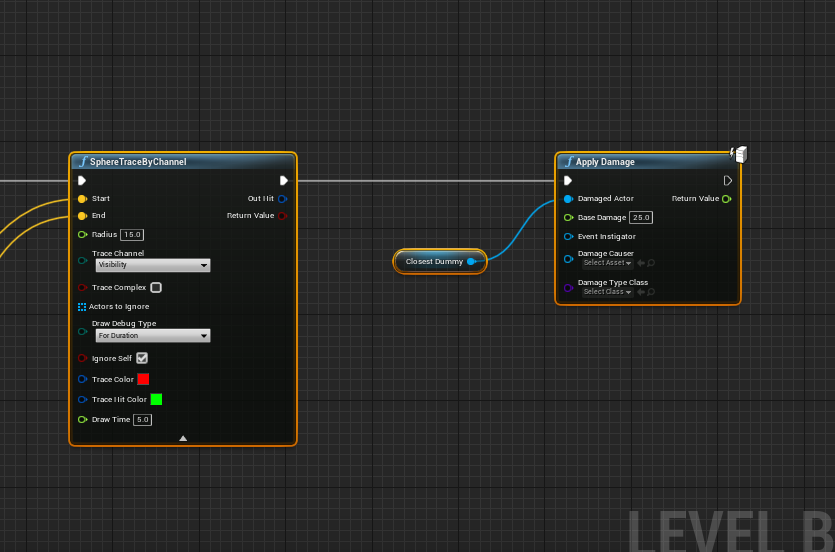 What happens in the game is that I fire on the first dummy, and they change material, if I fire on one specific dummy (the one that it was used as Target for the bound event) then it does find the closest dummy and does the live/sphere trace to them and “damages” the second one no problem… the issue is that when that second dummy is “damaged” the FindAndZap custom event does not try to find the NEXT closest target because the event is bound to that one Get Actor from Class target… that’s what I don’t know what to do. How do I make it so every time the FindAndZap event runs it finds the next closest target to the one that was just being damaged and not only that one actor.

I hope I made it clearer now!

So my issue is not actually finding the closest one. I’m actually able to find the one that is closest to the first object I shoot…

Did a quick demo to test it out. this is what I ended up with: Chain closest within radius - YouTube

It’s a bit longer than I thought it would be

so rather than sharing blueprints, though of just summing up the steps to build it. I’m doing this in an actor component + spawning another actor for the timed “jumps”. These are the steps:

I found I needed 2 checks to avoid access none:

For this final part, I spawned a new actor that only recieves the ignore actors array and I reset all remaining variables for next time player interacts with a valid actors.

Thought spawning a new actor was the best solution because it allows to have multiple chains running at the same time, each with their own timer.

Hope it helps. Feel free to ask if you need clarification on something specific.

Just FYI: did not use a single delay node for this. Only a Timer by Event in the spawned actor.

1 Like
Creating a chained lightning projectile that bounces from enemy to enemy in Blueprints
Kuhnen January 13, 2022, 5:06pm #6

I ended up making it work in another way but I will try this way too just for practice haha.

Stick around and perhaps consider giving back to the community.

Hey! I’m trying to figure out something similar but I am having trouble starting. Would you mind sharing your version that worked ? I would love to see the inner workings of your blueprints (if possible)