As the title says the x64 version of prereq wont install. The x86 version installs without any problem at all. Only problem is that it’s not what’s needed to install the engine.
I have read every single thread similar to this issue and done everything others have done.

I have done this in every possible order on both Windows versions.
And yes all of this has been done with Run as Administrator.

I am rapidly running out of patience in fixing this.

Including dxdiag and the log from the failed prereq installation.

I would be etarnally grateful for help with this because I am pulling my hair at this point.

What version of the engine are you trying to install? If you are using the Epic Games Launcher, do you have the 4.11 preview installed already? Let me know if specifically removing the prerequisites files for 4.11 before attempting to install another version helps.

I have 4.9 installed and am trying to install 4.10. I had the 4.11 preview installed before but removed it and the prereq associated with it when the 4.10.2 update came and wouldn’t install (as was mentioned in another question that the 4.11 one was interfering with the 4.10.2 update).

I have removed everything, including the prereqs, so that the install folder is gone and made a complete new installation as if I had never had it installed.

Are you getting any sort of specific error when trying to install 4.10? Looking at the log file you attached, it appears to have an issue with prereq setup in the Users\Audam\AppData\Local\Temp folder. Let me know if you’re able to install the engine after deleting this folder.
EDIT:
The error code mentioned in the log (0x80070002) appears to be connected to windows update issues. Please also make sure that Windows is up to date properly.

The launcher gives the error 1603 (reason why I uninstalled VC 2015 as said in another question thread) when I have to cancel the installation of the prereq. And windows is fully updated, last checked today. Will try what happens with the temp folder deleted.

There is a bug reported for the R-1603 error that is under investigation. For additional information, can you provide your launcher log files? The launcher logs can be generated by following the steps in the “Getting Debug Logs:” header here:

Removing Temp folder did nothing. While getting the logs I noticed something strange. Clicking the Settings cog in the launcher froze it. Maybe it will show up in the logs? Attached below.

I just want to confirm the steps you’re using to install the engine. If you are using the Launcher you should be able to go to the Library tab and click the Add Versions button near the top-center of the window then specific the version you want and press Install.

If you are using source code from GitHub you should be able to download the .zip file and extract it to your computer. From there you run Setup.bat followed by GenerateProjectFiles.bat. Once those finish you open the UE4.sln file and build the UE4 solution.

Can you confirm that you are following one of these processes? If you are using a different setup process can you list the steps that you use and where in the setup you are getting this error?

I am using the Launcher and the error comes when the download is completed and the installation is verifying.

Here’s pictures of before installation (1), during verifying process (2) and the subsequent error (3).

EDIT!
Giving a more detailed timeline if it might help:
I had 4.9.2 and 4.10.1 installed. Then the 4.11 preview came so I installed that. Then shortly after came the 4.10.2 update. The 4.11 things were not compatable with that so I uninstalled everything related to 4.11 and since then I can’t install 4.10 at all.
Maybe it will help in some way.

Can you navigate to the file location where the Launcher and Engine versions are installed (default should be Program Files or Program File(x86)) and go into the folder for the latest engine version (likely 4.11). From here go to Engine\Extras\Redist\en-us. Inside this folder there is a UE4PrereqSetup.exe for x64 as well as x86. If you run the x64.exe it should prompt you to uninstall. Let me know if you’re able to update 4.10.1 after running this uninstall.

It does not prompt me to uninstall, because as far as my computer knows it is not installed. Is it possible that a file from a previous installation is still there even after uninstallation and is the problem? Where does the prereq get installed?
EDIT!
I found this in my Registry

But the specified folder does not excist. Am I right in assuming that this is the problem? If so, it should be safe to remove this entry from the Registry since the target does not excist right?

Which engine folder did you check? If it is asking you to install rather than uninstall, can you go into the folder for the previous engine and check it as well.
EDIT:
The items in the registry may be causing the conflict. Let me know if removing the entry from the registry helps.

Deleting the Registry part still gives this error when trying to install the x64 prereq. 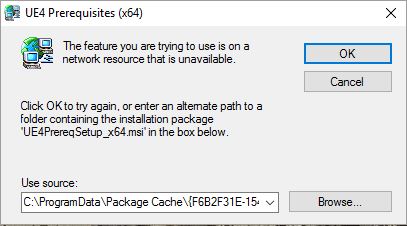 !!DISCLAIMER!!
This is for advanced users only! Doing anything in your Registry without knowing what you’re doing could have severe consequences.

So what I did was do a Ctrl+F in the Registry and searched for {F6B2F31E-154E-4542-9CB9-B736FFB86BA8} (Your folder name might differ so just use yours). It is possible that doing this might just freeze your Registry (it did for me at times) so just searching for the first part (F6B2F31E in my case) might be preferable.

So I went through my Registry like this and removed all traces of that. Just be sure to check that the full string matches before you remove it. Removing the wrong thing in the Registry is bad.

Hopefully this might help others and you experts at Epic to find a better way to solve this. I want to thank Doug for helping me to get this issue resolved. Kudos!
Others with the 1603 error might actually have this issue (since that’s what the Launcher showed after installation failed). Might be worth looking into.

THANK
YOU!
This resolved my problem, too! Thank you so much

hi everybody
i have too a problem with some games dont wanting to launch and ue4 prerequisites setup(x64) failing on my win 8.1 pc

For the love of all that is holy, please stop using pictures for things like this! And where in the registry was this?

Why should I stop using pictures like this? Also, look at the answer to this question and you’ll see.