Sometimes when you get a crash the callstack says things such as:
“GPUCrash - exiting due to D3D device being lost - D3D Hung”.
“DXGI_ERROR_DEVICE_REMOVED with Reason: DXGI_ERROR_DEVICE_HUNG”

These messages are difficult to navigate because they indicate the GPU crashed and that is generally harder to debug than CPU crashes.

What can I do?

You can send engineers callstacks (at least Game Thread, Render Thread and RHI Thread) and log files via UDN that hopefully will contain information that will help understand what is happening. Unfortunately, when you get a GPU crash, the CPU call stack does not really point to the real cause of the crash but just indicates what the CPU was doing when the GPU crash happened. Therefore it does not provide actionable info.

The best way to proceed in this case is to run UE with the -gpucrashdebugging flag and see if the log contains useful information. After that, you can also run UE4 with the -d3ddebug flag that also could give you some clues. It is strongly recommended not to use -d3ddebug and -gpucrashdebugging together, you should pick one or the other. Ideally you should send engineers both logs, running the engine separately with each of these flags. UE logs are saved in [MyProject]/Saved/Logs.

Windows generates dump files that can be helpful so gathering them is also a good idea. Ask Epic engineers if you need to know more on how to get these dump files.

Usually GPU crashes can happen for any of the following reasons:

There is a number of things that can be done that will help to identify which one of the above is the underneath cause:

The GPU runs out of memory (OOM)
If the GPU runs out of memory, it could crash. That depends on the RHI you are using, some are more resilient than others and in the case of an OOM event they just get very slow instead of dying. To find out how much memory your graphics card is using, open the task manager, go to the performance tab, select the GPU and check what is the memory consumption before and during the crash. 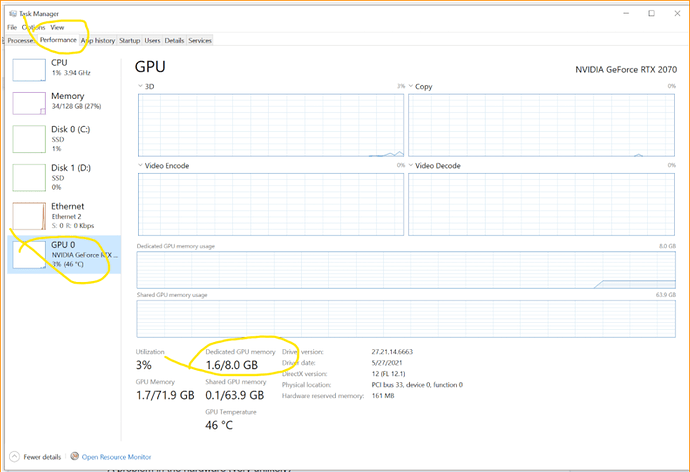 If you are close to your memory limit, that is possibly the problem. In that case try to reduce the memory usage. In order to do so, you can do the following:

The GPU times out while doing a expensive operation (TDR event)

When the CPU sends a command to the GPU for computing something, the CPU sets a timer to count how much time the GPU needs to complete the operation. If the CPU detects that the operation is taking too much time (by default it is 2 seconds in Windows), it resets the driver causing a GPU crash. This is called a TDR event (Timeout Detection and Recovery).

Ideally the engine should never send the GPU such an amount of work that triggers a GPU event, but it should be able to split the task in smaller chunks so TDR is avoided. However real life is not as beautiful and TDR events happen. In order to avoid them you can increase the TDR value in the Windows register to avoid the GPU driver reset. You can find more information here:

On Windows, this window will appear if Substance 3D Painter detects that the current TDR value is below a specific limit (10 seconds)....

TDR and Ray Tracing
Ray tracing is particularly costly so it is more likely to trigger TDR events when it is enabled.

When the tile size of a pass is greater than zero, these passes are rendered in NxN pixel tiles, where each tile is submitted as a separate GPU command buffer, allowing high quality rendering without triggering timeout detection. (default = 0, tiling disabled)

Again, this is something the engine should handle internally and engineers will continue working to minimize TDR events as much as possible.

A bug in engine code
Bugs in the engine can cause GPU crashes. UE is quite large so some preliminary A/B testing helps a lot. These are some of the things you can do:

A bug in the driver

It is worth investigating all previously mentioned possibilities before coming to this conclusion. Try to get drivers up to date and check with engineers and QA if you are using a driver that has known issues.

A bug in the OS

It is worth investigating all previously mentioned possibilities before coming to this conclusion. For the specific case of Windows, the strongly recommended version is 20H2. To find out which version you are running, press the Windows key and type “winver”.

It is worth investigating all previously mentioned possibilities before coming to this conclusion. For the specific case of Windows, the