I am actually beginner in ue4 so let me clarify the question: what is the difference between creating a new level from file tab on the top left corner (or ctrl+n) and creating a level from levels tab, levels window , like under the persistent level ?

yes if you create a level from levels window, it becomes the child of that persistent level. And if you create a new level from ctrl+n, i think you are creating a new “parent” level. But the really confusing thing is they all called “levels” !! (maybe another name would be better like scene ?) and in the content browser, the icon of levels are not any different between each other so you can mistakenly click a sublevel if you didn’t name it properly.

So it seems you have like 6 levels in the content browser right ? But only 2 of them are parent level and rest are the sublevels. Because persistent level treat them like sublevels so without it they won’t exist.

Like i said, i’m really having hard time to understand these things , differences and i haven’t find any useful documents or video which points out these differences. (youtube videos tell only the persistent level side, not the new level)

so feel free to share your knowledge or paste some useful guides or videos?

The only case when I used sublevels within the persistent one was Level Streaming. I had 3 maps: A, B, C. When the game started, player was spawned in A but B and C were loaded in memory to speed up opening new map. So basically you have one big level which contains several maps (or several pieces of one big map) and you can tell Unreal when it should start loading certain map.

This is well described in docs:

I have read that docs, they are not telling about what i am asking. They all say "In the Window tab click Levels 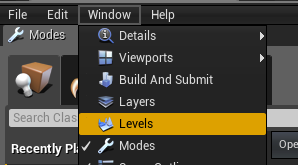 and create as many levels you want beneath the persistent level", “you first need the Levels Window” right ?

But in the File tab (top left of the screen) you can create a new level and it won’t be the sublevel of your current persistent level, it will be the completely different another persistent level. 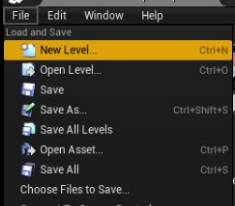 Those two things are very different and there is no mention about them in the docs.

I created persistent level through File → New Level. Then I opened it and added sublevels (A, B, C) using Window → Levels. I think this is some kind of manager for levels, which also allows you to create a new one and automatically connect it to persistent. There is also an option to add existing level, which was created by Ctrl + N, as sublevel.