link text
This may be a hard question to help solve, but I’ll do my best describing it. This crash just started affecting Android after upgrading to 4.24, but was affecting iOS since 4.23. This does not crash when running PIE or any Windows builds.

I have a pawn, called Huli_Pawn, for my multiplayer level (spawned and possessed) and the same pawn asset is just used to show your character in the main menu level (non-multiplayer, spawned but un-possessed). In the main menu level, the player spawns via PlayerStart and possesses an empty pawn, called MainMenu_Pawn. The player then hops from various cinematic cameras surrounding the un-possessed Huli_Pawn by clicking UI (UMG) elements to perform the camera switching. The stationary cameras are there to view Huli_Pawn character at different angles.

When switching to a camera that is viewing the pawn on main menu, it instantly crashes on iOS and after a few seconds on Android. The same pawn asset when in multiplayer levels works fine on all platforms with no crash. The only difference I can think of in multiplayer is that the pawn is possessed. In the main menu I’ve spawned it, but not possessing it. Any ideas what could be going on? Thanks in advance.

Can you gepost the device logs?

Thanks for responding. I was able to curb the Android crash after making some changes to my game, so I’m just packaging another build and will be pushing it out on my iOS device today to test to see if the changes have also cleared the iOS crash. I had some server events that were mistakenly being called on the Main Map as well as some equip-clothing issues with my character system that could have been affecting it. I’ll repost here after I’m able to test out the changes on all my dev devices.

In the case that it doesn’t work, would you be able to point me in the right direction on how to extract the UE4 crash logs from iOS? I wasn’t able to find a definitive guide on how to do it. Thanks again.

there is also how to get the logs out of android

Ok, here are my iOS logs after I triggered the crash. link text

Update - so to start eliminating what it could be I started half-splitting a bit. I’ll report back when I can get further along.

Fixed the iOS issue. It happened to be a post-processing setting that was applied to one of my cameras that the player would switch to, but I found it. This setting popped up when I was clicking each camera to find the one that I wanted to test with and filtered on “tag”. The setting that caused the crash was under my cinematic camera > Rendering Features > Misc > Screen Percentage. The value was previously set to: 396.190491 and upon resetting this to 100, I got no more crashes on iOS.

I don’t even know how this got set because I don’t ever recall even knowing about this setting nor do I know what it does, lol. I’m curious to know why this causes a crash on mobile though.

Hopefully this helps someone else out in the future and a big thanks for BlueMind Studios for pointing me in the right direction to extract the logs from my devices.

I’ll only mark this as the answer once I confirm that Android also doesn’t crash anymore after making this change (my previous comment about it not crashing anymore was proven wrong, it just takes a bit longer for the crash to take place once switching cameras). 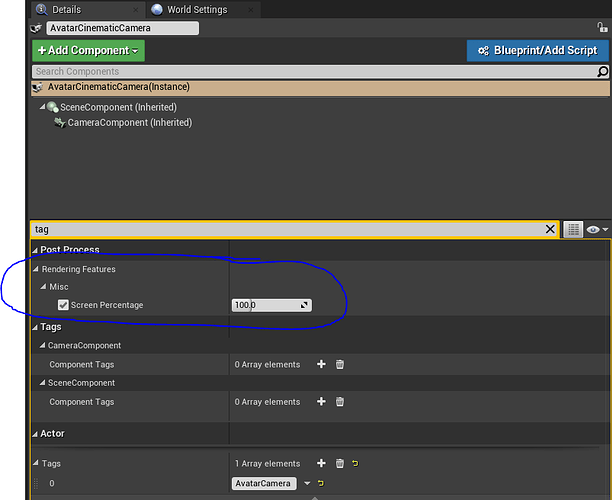