Next stop: Changing the hierarchy at Runtime

In this article we will discuss changes to the Control Rig hierarchy in Unreal 5.0. We are presenting a new and novel way to manipulate the static hierarchy by removing certain limitations seen in other hierarchy implementations.

We will discuss previous limitations, our implementation, and use cases of the Dynamic Hierarchy. This article will be of interest to Character Riggers, Animators, and Programmers regarding Control Rig and Runtime Animation inside Unreal 5.0.

What are some of the problems in current systems?

These assumptions / technical limitations drive the design of character rigs all the way to animation pipelines at film and games studios alike. This results in:

Dependency graph based architectures have a series of disadvantages for character rigging and animation:

Over the years many proprietary solutions have surfaced through conventions and presentations which showcase novel approaches. For example, the approach of ephemeral rigging as presented by Raf Anzovin suggests a different approach - and can provide food for thought.

Let’s dive into it by defining a series of assumptions before looking at needs / asks:

To answer to the assumptions and requirements above we’ve designed the Dynamic Hierarchy inside of Control Rig to combine flexibility as well as performance. The Dynamic Hierarchy will be familiar to our previous implementations on the top level, making it an opt-in feature for users along with being backwards and forwards compatible as of this writing. Previous implementations (as of 4.26 / 4.27) use a simple flat data container which focused solely on performance and data compactness, but didn’t provide the needed flexibility.

With 5.0 we separate the hierarchy infrastructure into two layers: The URigHierarchy (data model) and the URigHierarchyController (mutating layer). The hierarchy as well as the controller support a notification scheme to wire it up to UI or other services for propagating changes. In short we introduce a soft MVVM design separation. The hierarchy however can perform any changes itself which are relevant for animation without the controller - while the controller is needed for topological changes. A topological change describes an edit which causes a memory layout change.

We’ve identified that there are edge-case scenarios for accessing the hierarchy only in local space (when integrating with the Animation Blueprints, for example) as well as accessing the hierarchy only in global space. Additionally the regular-case scenario is accessing some transforms in local as well as some in global space. To support this we’ve implemented a lazy evaluation scheme in which the local can be computed from global and vice versa - while caching intermediary results. To stay on top of the cache validity complexity we’ve also introduced a cache validity checking mechanism which can be enabled via a C++ define.

To identify topological changes there is a notification scheme via delegates available as well as a topology version - with which you can identify if elements have been added / removed or if relationships have changed since you’ve accessed the hierarchy last.

The hierarchy can store a list of elements, where each element can have relationships to one or more additional elements. As of 5.0 the only relationship that exists is the Parent-Child relationship. Certain elements can only have one parent (FRigSingleParentElement), while others can have multiple (FRigMultiParentElement). We’ve deliberately chosen to offer the multi parenting feature as an option - so that most of the hierarchy can benefit from the slightly better performing single-parent-element.

As an element is related to more parents over time - the weight of each relationship can be modulated / animated. By moving all of the weight from one parent to another the element can switch its space, since the local transform is now expressed in another parent. Combining this with the lazy evaluation scheme the global transform can be compensated easily - so that the element doesn’t move or “pop” in world space. You can mark the local transform as dirty (to be recomputed) and change the parent relationships accordingly.

One of the big differences between classic DCCs and our implementation is that parent relationships can be completely temporal, meaning they can come to existence and disappear completely after some time again. This allows for flexible choice of space and relationships during animation authoring without having to worry about cycles.

In 5.0 Sequencer utilizes these capabilities to offer the Space Switching user-facing featureset. 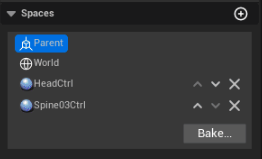 Specify the space for a given Control.

The hand controls change spaces as the timeline is scrubbed.