Building a very basic Mahjong for a very special person.

Update: Found a video and may give it a try in a similar way. I need to figure out a way to get positions into an array as target points and then at least make it happen that I can spawn “one” asset on one of these positions randomly. 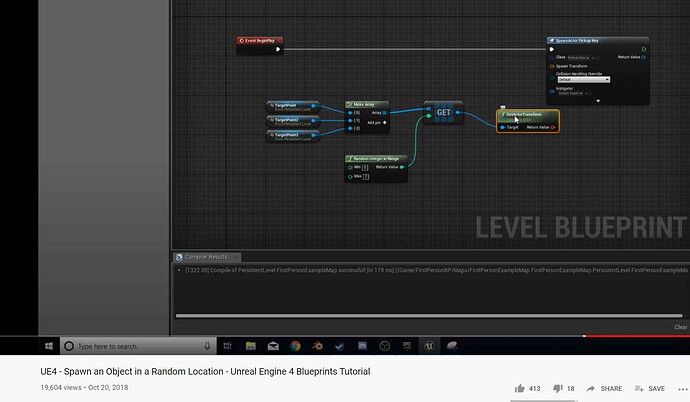 You told something about object-oriented framework. So would it make sense to create each stone as a separate blueprint or having all stones ready inside of a blueprint as existing actor-meshes? If yes, how can I give these objects/meshes a unique ID then? Maybe its simpler by end of the day to make the layout directly inside of a BP with existing meshes, but then have to define which ones are pairs.

That would be interesting. I need to know a couple of things here:

a) I made a Texture that contains all bricks. Now, I am unsure if Flipbook has the option to say: “I am the Flipbook and I have 42 frames because I have 7 rows and 7 columns” - Is there an actual integer/value option to have access to that provides the ability to say: (example) Brick with ID number 36 needs “frame” 27 from the 42 frames long flipbook texture? So far I was not able to find a way to access this.

b) Instead of Flipbook, should I better go with UV spaces to set up the rows and lines and then just tell Brick with ID 36 (example) to use the UV space which contains the texture for that particular brick?

c) Does anyone know any sources on how to set up a texture with a layout (probably little white dots to define positions) and to interpret these points to actual actor spawn positions?

d) My first thought was that its best to not spawn or add any mesh and drive the system by spawning the stones on runtime directly. So that on gameplay starts, the system reads a location data table and knows there are 144 predefined points in space that needs to be filled with 144 ID’s from another data table, which will use the brick mesh and their fitting UV texture. All of the 144 stones have to be added randomly though.

Yeah, I really need to dig deeper into spawn actors first - But I really wonder why there is so little documentation or information about using data to define points in space and then let meshes spawn on these positions.

The flip book material node deals with all this and controls the UVs, that’s the point of it.

You can then make a material instance from the material and control which part of the flip book you’re looking at. 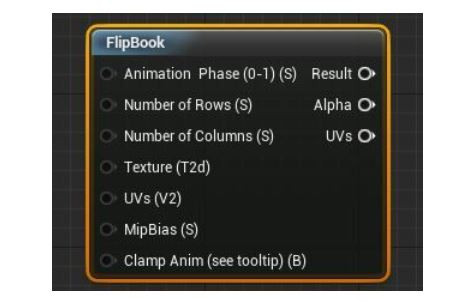 You told something about object-oriented framework. So would it make sense to create each stone as a separate blueprint or having all stones ready inside of a blueprint as existing actor-meshes? If yes, how can I give these objects/meshes a unique ID then? Maybe its simpler by end of the day to make the layout directly inside of a BP with existing meshes, but then have to define which ones are pairs.

Like I said above, you just need ONE blueprint, you pass it a parameter which will tell it which part of the flip book to use

Understood. Well, at least I will try that.

As a reference for you to understand how I understand these things right now: It feels like being a blind person that got told to pick up the red toy bunny from a table that is somewhere in this room. As weird as it sounds - but that’s how most topics in the last years ended up for me. People really tried to help, pointed me into several directions with terminologies makes me feel even more lost.

It is weird as an artist with over 22 years of experience that its so **** hard to get into these Blueprint/Coding things. Especially when people think that you should know certain things out of the box. I know a lot of stuff and created Material BP’s for an AAA title - but some things really don’t get into my head when it comes to BP’s in general.

As a current example, I created a flipbook material and from my artist’s perspective, the flipbook node is ****. It does not give me any option to tell that I need frame number 20 for example. Of course, there might be some weirdo math-magic to get this frame. But I simply don’t know how - and I googled the hell out of it in the last half hour.

And then I start the trial and error stuff, trying to understand the puzzle pieces that I got from the people who are really cool, helping me out.

Update: What I try to achieve is to get Integer numbers out of this Flipbook. Based on the number of rows and columns, it should be 49 possible integer numbers for later use. At least I think that I need these to tell any brick to use one of these numbers between 1 and 49. I tried certain nodes that sound like they would give out an index, but no luck yet. 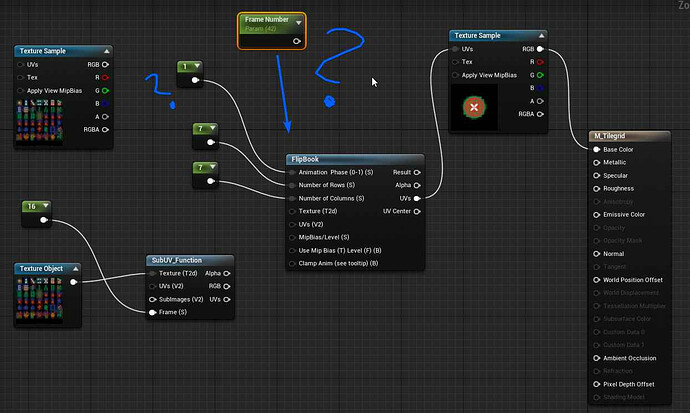 Another update: Figured out to get the frame number.

Another update: Figured out to get the frame number.

Like I say I would give you more concrete example with pix, but I’m not at a machine right, and wont be for a while…

Haha, nono everythings fine @ClockworkOcean . If you see or read me pissy or being lost…its really just about myself running through the Blueprintnode-Jungle with a Machette like a dad through his backyard-house to find hammer and nails. I am just documenting this whole process here step by step since it might help others as well along the road if somebody wants to do something similar. <3