Aim With Offset In Control Rig

Hi, I’m trying to make an aim offset in control rig, but for a first person character. Because the camera is attached to a socket where the eyes are, and not the head bone itself, when aiming the head at the target, the camera is still slightly off-center, meaning it has to correct itself again (aiming at the spot 1000 units in the camera’s forward vector from the camera socket location), setting the head to face that center point, and looping, which causes the head to wobble uncontrollably.

The fix for this I’m assuming is accounting for the offset between the head bone and the camera socket, aiming the camera socket towards the target instead of the head, then setting the head’s transform based off of the FP_CameraControl (This control receives the offset calculated on begin play and fed into the control rig, and is set relative to the head bone using that value (since as far as I’m aware sockets aren’t available in CR)).

My question is how would I account for the offset when calculating the aim or setting the head transform? The blue line is the line I want to intersect the target, and is going directly forwards from the camera socket
The green line is the actual direction of the FP_CameraControl (which looks like something may be messed up with the hierarchy, applying the rotation twice when parented to the head? I’ve just turned off Propagate to Children in the final Set Head Transform, and the green line now matches up with the blue, but the location is coming straight from the head bone without the offset, and both lines are still missing the target)

And there is an excellent explanation 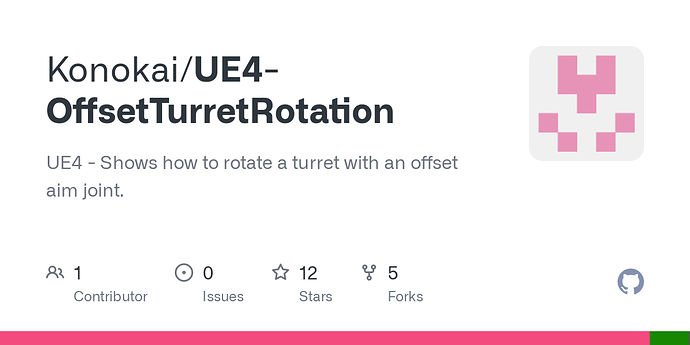 GitHub - Konokai/UE4-OffsetTurretRotation: UE4 - Shows how to rotate a turret...