The following is a short clip of a situation that I’m mostly Curious about.
It won’t bother me because there is no way that with anything other then Ansel this will ever be seen by a player in this fashion, however I believe it would be good to know what it is caused by. 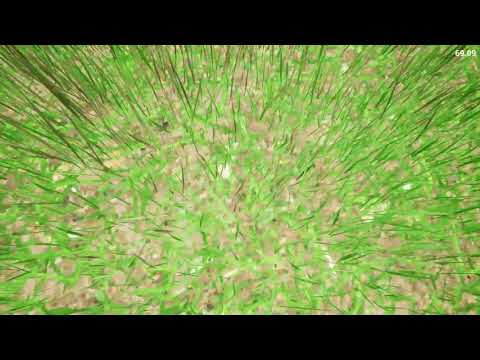 A little-bit of background. The game is in DirectX12 mode. as such I can’t use fraps and I hooked up a custom widget based FPS counter - this is obviously not accurate. I can tell that i’m no where factually near 40fps when panning about. (then again, I’m only updating every second, so there’s that too in terms of accuracy).

With the video compression it may be hard to see, but it seems like the ue4 temporal anti aliasing is causing this haze like effect - where there really should not be any.

The original capture is at 4k, and the map is using world composition with around 110KM squared total size.

The landscape material is green, complexity wise, and it uses a hard UV swap over distance, then blends another sample across the hard line. This was a somewhat obvious optimization after testing many different ways. All the textures in use are 1024px, which also bumps the FPS up compared to 2k - though I could maybe use larger ones. I doubt it matters. The player character will never have a camera so low to the ground anyway.
Everything is set up to use Virtual Texturing, but it is not implemented as of yet. the project has it enabled, which may be partially why this is happening.

So. Has anyone seen this before? Any ideas on what I could potentially tweak to lessen the effect?

It might be something to do with anisotropic filtering

It’s very weird. I don’t have the effect when spawning. but I do after moving away.
I’m currently thinking it’s something due to floating point precision - except for world origin rebasing is obviously enabled. Not sure what to make of that.

It seems to be a kind of distorsion given by bump height. I dont know if you’re using that, but in this case reduce the bump offset. Otherwise, texture tiling and camera?