What is the point of Unreal Roadmap?

can anyone explain to me what is the point of the current Unreal Roadmap found here?:
https://portal.productboard.com/epicgames/1-unreal-engine-public-roadmap/tabs/46-unreal-engine-5-0

Previously, when the roadmap was a trello board, it actually showed planned features and features being worked on in the next release. The term “roadmap” is usually meant as “known plans for the future”. What we have currently is not a roadmap, as it doesn’t show future plans. It only shows already completed features, so it’s not really a roadmap.

What I am further confused about are these buttons: 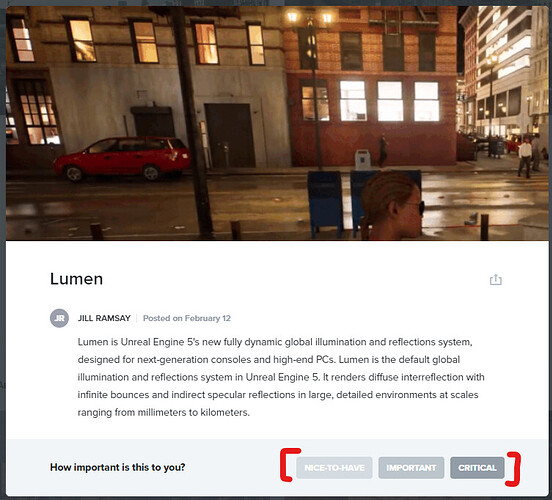 image754×682 113 KB
They don’t make any sense, because the question is pointless for a feature that’s been already shipped in the engine. If it wasn’t already known why the feature is important, it obviously would not have allocated development resources to, and would not be completed and shipped.

Worse yet, when any of the buttons is clicked, it further expands the query:

image795×348 28.1 KB
I mean let’s take a Lumen as an example. “Why do you need this?” - really? Isn’t that absolutely obvious? Everyone knows why Lumen is needed. How would that help Epic make it better for us? They already know the answer

This roadmap site seems pointless and everyone who stumbles upon it will see right through this fact in half a minute.

The only case where questions like “How important is this to you?” and “Why do you need this?” would be appropriate, is if this roadmap page contained future features which are planned and/or under consideration.

I would somewhat understand the corporate excuse of not disclosing future plans if Epic was publicly traded company. But it’s not. The next version features are no secret. Anyone can build the engine from source and see what’s planned at any time. So it’d be nice to have some short condensed summary of what we can look forward to. That was exactly what the original trello roadmap did and it’s exactly what the current roadmap does not do

Right now, it’s not a roadmap. It’s just a release notes summary of past versions, and a marketing material. So it’s very odd that it pretends to be a roadmap and feedback collection page, which it obviously can not be.

I think a history of changelogs, news articles etc. belong to a roadmap, as not everyone will be using the latest tech. Of course it’s also advertising. But you have a valid point.

On that website you can’t really see what anyone is working on. You can’t write a proper feedback. It’s basic journalism and advertising which is for a specific group of people.

However I expect something entirely different from a roadmap. As an active developer and programmer I go straight to Git, the documentation or the changelog whenever I need to. I can’t do anything with a 20 line description of the new lighting system written last month.

If you are a programmer, designer, translator, animator, modeller, name it, there is nothing on the page you don’t already know?

Maybe their idea of that “Roadmap” page is not really aimed at developers?
A roadmap should be the place people go to be informed about current and planned projects, important changes and to get involved. But I would like to deep dive into a proper administrative system to see calendars, tickets, commits, customer / developer / community interaction and feedback systems. I’d like to vote up engine issues which have been pushed aside for the past 10 years leading to constant frustrations on this forum with old and new devs. That is what a roadmap should be.

Maybe their idea of that “Roadmap” page is not really aimed at developers? A roadmap should be the place people go to be informed about current and planned projects, important changes and to get involved. But I would like to deep dive into a proper administrative system to see calendars, tickets, commits, customer / developer / community interaction and feedback systems. I’d like to vote up engine issues which have been pushed aside for the past 10 years leading to constant frustrations on this forum with old and new devs. That is what a roadmap should be.

You can be sure Epic Insiders & Partners have access to a real Roadmap.

Whereas users in this mushroomed Community are left completely in the dark.

So l say don’t look at this in isolation. Instead look at things more widely, starting with the Bug-Submission-form. Users give Epic a wrapped-up repro and they give users nothing back. Look at all the wishlist and feature requests? Those have been hidden for years! Threads with feature requests and bugs now? They all just get ignored… It all started with the clumsy retirement of the WIKI. So this trend is all connected…

Look at the secrecy surrounding VERSE, a key deliverable of UE5. Forget the hype of Nanite & Lumen. You could always create nice lighting in UE as far back as UDK. You could also optimize all the meshes in your scene, it just takes more manual labor. But stuff like VERSE and LWC, they’re real game changers. Users can’t create those kinds of features not without insane work / talent.

It’d really help to know how VERSE will shape up, but Epic refuse to say almost anything. Ask and you get the overused: ‘if we told you we’d have to kill you’ line.

Overall, Epic have broken the Roadmap so many times its like an election time promise (you know you can’t trust any of it). As Epic as a corp have multiplied in size, they’ve basically become a much more closed shop. Essentially they behave more like Microsoft now (Epic even admire Redmond again). About the only positive thing users can take away from recent initiatives are little hints from the AMA threads.

I am fine with them keeping some things secret, if they wish to. But there are many great new UE5.1 features we are already aware of, because many people have built the engine from source.

It would be nice to see them on some roadmap. What’s most frustrating about this is that we had a functioning roadmap when it was back on trello. We already had a roadmap which showed both the future and the past. Now we have a roadmap that shows just the past. It’s a downgrade.

The downgrading of things has been a recurring theme for website part of Epic. The engine has been consistently doing a great job past few years, but the website(s) team seems to be doing quite the opposite in recent years. Some time ago, we had a great, simple, uncluttered, discourse based forum. Now we have visually noisy, confusing, and feature lacking gimped version of the discourse forum. Ever since the migration to this new bloated forum/learning hub, I am visiting the forum much less because it’s just too noisy to find the relevant information

But that’s a topic for another thread. I feel your pain, but I’d like to keep this one mainly about the roadmap.