What is covered under "Character > Replicate Movement"?

I don’t have any actual character models, so for now I’m just using two cylinders, one encapsulates the capsule component and simulates the player’s body, the other is a smaller one simulating a weapon. As you move your cursor around, the weapon rotates around to face the mouse position, left click fires. Works well in single player.

I’m having difficulty getting the gun’s rotation to replicate though. It seems the “Replicate Movement” under a character’s defaults tab only handles as much as the actor’s location and rotation, ignoring the specific components. Here is my blueprint to handle the gun rotation: 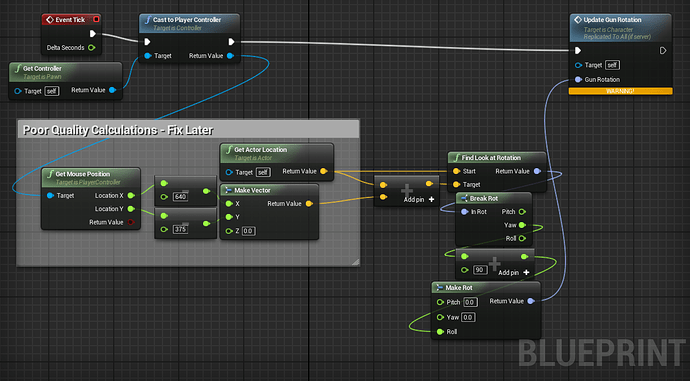 So I get the controller, get the mouse position, use some shoddy math to adjust it so it uses the center of the screen instead of the top left corner, do some other questionable things with the rotation to get it right (not pretty, this was a trial and error effort) and finally get the new rotation.

My poor calculations aside, I get the new rotation and call UpdateGunRotation 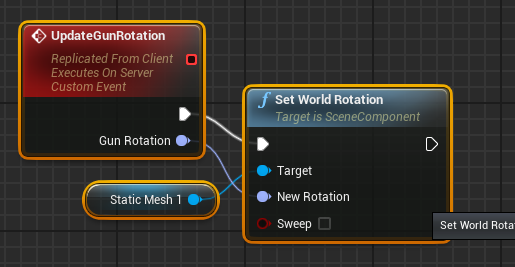 Which is a custom multicast event, taking the rotation and applying it to the component.
A side note, for some reason the text on the event node in the last screenshot didn’t update, it’s set to “Multicast”, not “Run on server”.

With this implementation, each client only sees their own gun move.

Edit: Due to the lack of response, I ended up using another actor for the weapon and attaching it, worked fine.