Warcraft 3 camera, is it possible?

I’d suggest having a look at the StrategyGame sample on the marketplace. It implements a similar camera view and mouse panning controls and would be a good reference to work from.

Hi. Im trying to figure out a way to implement this type o camera using the blueprints system:

Im really new to the unreal blueprint scripting, i saw all the tutorials on your official youtube page, and tried to combine the ideias of these two tutorials:

Environment Artist.com. I am an Environment and Prop Artist in the video game industry since 2005.

But my first question is how do i get the screen bounds?

And those tutorials, are they helpfull for what im trying to do?

My group for the final project on the couse i am in, we are using the unity engine, because its fairly simple to program on it, and get the game logic implemented pretty fast, but because of those awful visuals that the engine renders, i´ve decided to learn the unreal blueprints, and make a prototype so i can convince them to use it. But i have to say it, its really hard to understand how you make the things work just the way you planned.

So here´s my plan:

-Implement this type of camera (at this time, i dont know how can i get there)

-In a map of hexagons, select two units, and measure the units between them (I dont really know how dificult its going to be)

-And finally, import a skeletal mesh, difine how many units he could walk, and make it walk on the grid of hexagons by the selected units. (if the last implementation goes well, i dont think this would be hard)

I have just ne mounth to do that, and really get into the blueprint scheme, otherwise i have to give up on it, and continue working on unity.
It would be better for me because the game would just go to another level, by using this engine.
And for you because im talking about 6 more subscriptions, and it would be he first project on my university using a unreal engine has base of a game made their. And yes they only theach us (xna and unity)/monodevop.

Thanks! But i can´t download it, cause it appears coming soon, any release date for that?

It has been available since the first release to the public. Maybe try verifying your install? 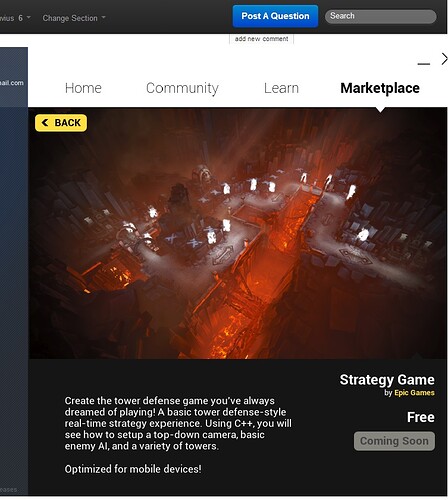 Don´t know, but this is for all the content there…