I have created an Matinee based Gaze VR menu system -an responsive button system by looking or gazing which can be modified with Matinee without too many BP complexity.

First you setup a linetrace system (makes your eye a laser which will interact with objects in the 3d space, will not go into this but here but have included an image of the setup for linetracte at the end of this post below. Second you need to setup Mesh triggers for the Linetrace, the following video tutorial by Korkuveren shows how to activate a Matinee by looking at an BP_Mesh thanks to the Linetrace/Raycasting.

Okay, next my setup for the VR based Matinee gaze menu with timer.

**1 Create 3 BP_meshes, one is the trigger-event (level start for example), one is movable mesh which will cover and Uncover the trigger BP_mesh, and third is an outer ring which will reverse the matinee cover.

2 BP_Mesh one is made invisible and activated by looking at it, will open new level, or do whatever menu event you create.

4 BP_Mesh 3 should act as an reset ring and is invisible just like BP_Mesh 1. When looking away from the middle BP_Mesh 2 which hides/unhides the trigger BP_Mesh - then your linetrace will hit the outer ring. This outer BP_Mesh 3 will reverse the Matinee of BP_Mesh 2, this will rewind and reverse the movement.

5 During startup of a map it can be that BP_Mesh 2 is not loaded yet, this makes the linetrace sometimes hit the trigger which is not what you want. So build an Invisible wal in front of the menu which will disapear after 3 seconds so the menu has time to build itself safely. And you can put on your Rift without touching a button by accident.**

With this setup you can make trough Matinee complex buttons, connect particle systems, animate lights and everything you want to be part of the menu system without having to build complex Blueprints. This system works quite well, improvements on this concept are welcome offcourse, can still be developed to a better & smarter system for sure. Next the Blueprint setup for your Level Blueprint in which your menu is build, including the connections to the 3 BP_Meshes as i mentioned in the 5 steps above that form one button in the end.

Setup VR gaze menu system with Matinee (This setup is for one working button): 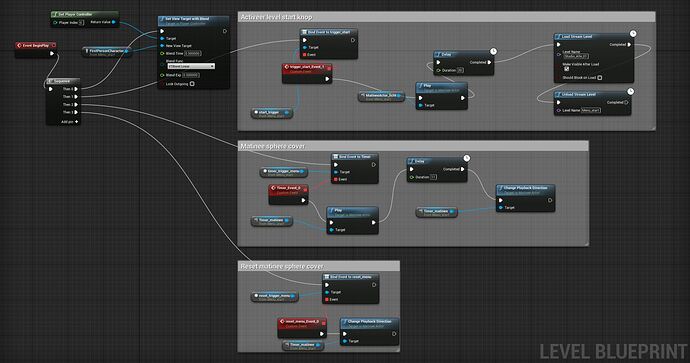