We’ve checked with and without the “smooth frame rate” enabled, and toggled vsync on and off in our Nvidia graphics settings.

All builds are locked at 60fps.
Is it locking the framerate to the primary monitor? Any ideas would be appreciated. We’re running a beast system with a 980ti.

Have you tried overclocking your main monitor to 90hz or setting the Vive as your main screen?

When this happens are you seeing the editor viewport in your headset?

Yes, this issue exists even if it is a new project. We’ve tried with new 4.9 projects and with upgraded projects but the issue remains.

Changing the monitor settings (Vive as main monitor, secondary, etc.) and overclocking the refresh rate have not fixed the issue.

1 - With the Vive connected, launch the 4.9 version of the editor.

4 - On this first preview use the “stat fps” command, the framerate is able to hit 90fps.

6 - Choose Play in editor in the level once more. The FPS is now locked to 60fps.

7 - Close UE4 and then re-open the same project.

8 - Run VR preview again and the FPS is able to hit 90fps again.

I’m attaching my dxdiag as well.

I thank you for the information provided. However, I do have another question for you. Are you currently experiencing this issue on a laptop? If so, could you try this on a desk top and/or try modifying your performance settings? The laptop may be throttling performance to save battery life.

I experienced the same issue. The cause is most likely that unreal editor overlaps the second screen when in fullscreen, as explained here: Latest SteamVR Beta causing Compositor Issue :: SteamVR Developer Hardware General Discussions

A workaround is to place the second screen below and to the right of the first: 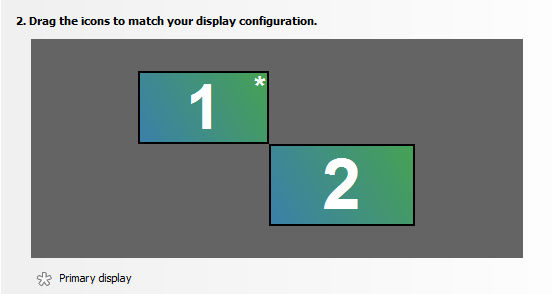 If the problem still persist make sure that the preview window on the primary screen doesnt overlap when opened.

This solved the issue for us. Thank you! We dropped you a line on Reddit as well. Cheers!

This worked for me as well, though not as exactly described. If I moved the Vive screen down and right the problem still happened. My preview window must have been touching both bottom and right. Instead, I moved it to the lower left of my second monitor, as shown below, and it works now. Thank you so much for the advice. You’re a life saver.

Is there a way to check directly if the compositor is running in full screen or not?

I am happy that you were able to find a workaround for this issue. I have written up a report ( UE-21310) and I have submitted it to the developers for further consideration. I will provide updates with any pertinent information as it becomes available. Thank you for your time and information.

Thanks a lot guys! This solved my sickening jittering issues I’ve been having for weeks!

I just started to develop with the VIVE, the device is auto set to be in direct mode, the only way to try this screen technique is to take the VIVE of of direct mode and position the screens as you are showing. When in UE4 this is actually casing the jutter to be even worse. Sickening worse! In Direct mode I am getting frame rates of about 45 fps when on the DK2 I was getting a steady 75fps. Is anyone from Epic aware of this situation in direct mode? Is there an eta for a fix?

After speaking with the developers and reading over the report mentioned above, I was able to find out that this issue is on Valve’s end. This being the case, you will need to speak with Valve for more information. I hope this helps.

The original issue that OP mentioned is completly solved with direct mode. If you hit 45fps in direct mode it’s a performance issue on your side and you don’t hit 90fps. If the frame rate is lower than 90 it drops to 45, because it has to wait for V sync. If your VR experience runs with lets say 85 fps on your system (without V sync) it would run fine with 75 fps on DK2 but only on 45 fps with the Vive because of the sync to 90Hz.

I don’t think that there will be a fix for this issue as it is fixed with direct mode and extended mode is more or less deprecated.

Does your issue happen in a new empty it Unreal project? What are your Hardware specs?