I managed to get my hands on a HTC Vive 2 weeks ago. It’s great and with Unreal it offers crazy possibilities. However, I’m having issues on how to handle it even on Unreal 4.11 preview 6.

I created a VR character with a camera (FPS-like) that I’ve done following the documentation on Unreal’s website. With this setup, the position of the camera is accurate and the tracking is good, but the root of my character stays on my player start position. This seems to be the default behavior since no blueprint where used or even added.

I want the root of the character to stay right below my camera (which is locked to my tracked HMD).

I tried to set the root’s world position using the “tracked device position and rotation”. This way, the root is moving but not enough : I think it only moves half the distance it’s supposed to, even when I set the camera position to be above the root.

Here is a screenshot of the blueprint used. 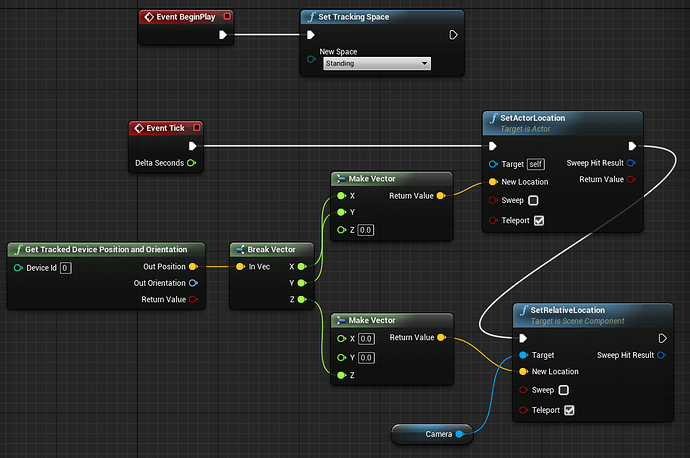 I’d like to know about this, too. For teleporting from place to place, it’s necessary to move the tracking root, but it seems that the camera is just absolutely positioned relative to the scene no matter what, when using the setup prescribed in the current documentation.

I haven’t tried this so it might not work, but these would be my ideas:

Add a camera component as the root component, the camera should be positioned where the HMD is (though it seems like you have done that already and it doesn’t work).
If the above does not work, in 4.11 with the camera refactor feature (I think that is what it’s called), you might be able to attach a component to the camera, that has an accurate position and orientation.