[Visual Studio] Has this issue been resolved with Microsoft, or this is a common problem?

This has been reported to Microsoft Connect here. 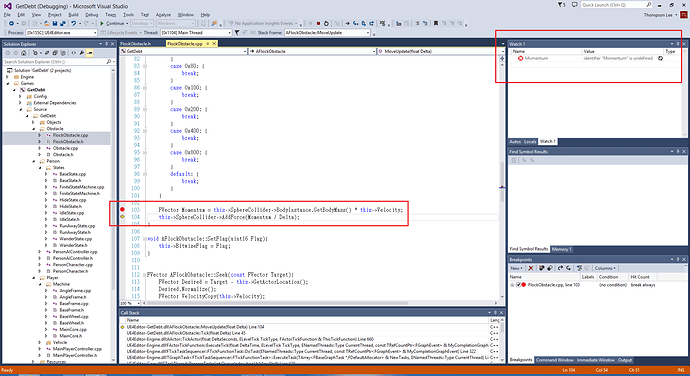 From the reported item page, the attached file contains an image that shows Visual Studio not being able to identify a variable that UE4 uses. I would like to ask if the Epic staff has contacted with Microsoft and has reported the issue to them, so that Visual Studio 2015 won’t have this issue occuring in Visual Studio 2013?

Or, is this a very common thing in UE4 C++ development?

This has nothing to do with UE4. I imagine you’re building a Development build, rather than a Debug one. Since it is a development build, compiler optimizations will be on and the compiler will have optimized the fact that you only use the value once to not actually store it in a named temporary. As you step through code you’ll probably have also noticed that the cursor jumps around a bit instead of going line by line.

Compile in debug and I’m sure your variable value will be visible.

I am having trouble using DebugGame Editor and DebugGame. Without further explanation on how to use the “-debug” flag, such as where to type the “-debug” flag at, I may just have to give up and use the Development build and dismiss the fact that I can debug variables.

That also helps me point out what I missed.

For those who are stumbling upon this, this article explains a lot more in detail