Wishlist us on Steam!

Battle for survival in the primeval world of Midjungards against 100 other players. Be the last player standing and become the Keeper of the Ur-Forest.

UrGothic Battle Royale is set in the ancient, almost prehistoric misty world of the Gothic civilisation, when strange creatures roamed Midjungards, the Gothic earth which later became the Midgard in Viking mythology. This Midjungards by the way, is the Middle Earth of JRR Tolkien’s cosmology.

100 players are dropped into a primeval forest where an unnamed horror lurks guarding the ancient UrHamar. Capturing this mythical weapon makes one the Master of the
Ur-forest!

The players must hunt for weapons to defend against other players, go on loots to find the elusive Galdurbrugga, a magic potion that bestows berserker skills and increased weapon abilities.

The players can choose between three avatars before game start. They attack first with secondary missile weapons to weaken the enemy. Primary weapon is for the close-in kill.

Huts in the level might contain both Galdurbrugga and weapon caches. With enough kills the player can metamorphosise and be conferred with Berserker skills.

The player must keep moving towards the Altari which houses the ultimate weapon, the UrHamar, which bestows a nearly invincible attack ability.

The storm comes in the form of Myrcki, a swarm of flesh-eating locusts. Anyone who comes in contact with the Myrcki will be eaten alive.

UrGothic lets the player enjoy the Battle Royale format in a prehistoric setting with missile weapons, melee weapons and elements of magic thrown in.

Fred, the game creator, once read a review about Tolkien’s works which talked about how the magic is almost relegated to the background in Middle Earth.

He has strived to recreate the same look and feel in UrGothic. There is much combat to indulge in and a bit of ancient alchemy elements to use judiciously.

Players engage in combat using missile weapons and melee weapons. They escape attacks using their speed and agility. The magic in UrGothic lets the player upgrade their fighting skills and weapon abilities.

The Paladin of UrGothic, armed with sword and shield and clad in plate armour, the Sverdur is descended from Fairguneis, the Defender of Gods.
[ATTACH=JSON]{“data-align”:“none”,“data-size”:“full”,“data-tempid”:“temp_182113_1580006478197_834”,“title”:“004_Sverdur-Image-and-Text-.png”}[/ATTACH]
https://forums.unrealengine.com/core/image/gif;base64
​​
Sverdur has a strong attack, exceptional defence and reasonable agility.

He can carry a limited number of maces, which are his secondary weapons, in his arsenal.

Once both the maces have been expended, he must close in for the kill with the sword.

He can hunt for maces in the weapon caches though.

Once Sverdur claims enough kills, he can acquire the Glowing Shield ability that confers him elevated attack and defence strength.

Born of Friddja, the Goddess of Hunting, the Jaegra avatar is the fleetest and the most agile in UrGothic universe.

005_Jaegra-Image-and-Text-.png273×685 274 KB
She is armed with a fantastically accurate bow and for close combat she relies on a pair of long knives.

The knives should be drawn only in extreme emergencies though as the Jaegra has next to nothing in the form of armour.

Close melee combat should be avoided and firing off arrows from a distance is the preferred attack method.

If pressed, the Jaegra can make use of her superlative acrobatic skills to jump out of the way to live another day.
With enough kills the Jaegra can level up her abilities to acquire the Flaming Arrow with which she can simply set aflame her enemies.

Born of Fanareis the Lusty Wolf, Smidur has a deadly attack and a strong defence.

006_Smidur-Image-and-Text-.png273×685 269 KB
Though not the swiftest avatar in Midjungards, The Smidur’s primary weapon, the long axe is a feared close combat weapon, often laying low his enemies with a single slash.

The Smidur relies on a pair of throwing axes for missile combat.

Misshapen, part beast, part man, the Smidur is a fearsome opponent to anyone who crosses his path in the Ur-forest.

Once the Smidur has enough kills under his belt, he acquires the Feet of the Wolf skill which gives him deadly speed.

Born of Jumeis, the Trickster God, the Berserker is a drinker of souls.

007_Berserker-Image-and-Text-.png273×685 138 KB
People of the Ur-Forest fear to even utter his name loud and he is always known as the Unnamed Horror amongst the lay folk.

It is rumoured that the wanderers of the Ur-forest, after getting a certain number of enemy kills, fall into a blood rage and go through a metamorphosis.
It is mentioned in hushed tones that a Berserker is born at the end of the metamorphosis.

The Berserker’s main weapon is a great war hammer. For his secondary weapons, the Berserker relies on magic. He has a couple of Spheres of Entrapment, which, when thrown, have a stunning effect and drag down the speed of his adversary greatly. The Berserker then closes in for the kill with his Warhammer.

The Berserker is terrifying to countenance and with his beastly strength can often crush opponents with a single blow.

One weakness of the Berserker is that he is painfully slow. But he overcomes this with a disconcerting piece of magic in his arsenal, known as the Trickery of Jumeis. When he imbibes a draught of the UrBrugga, he acquires the ability to become invisible for a short time. Cloaked thusly, he can sneak in close to an unsuspecting enemy and reveal his terrible form before smiting down with a single blow.

The storm comes in the form of Myrcki which are dark, flesh eating locusts, that devour within minutes anything they come into contact within the forest.

The combatants can hunt for Galdurbrugga, which is an ancient potion of magic that restores health and stamina.

When players acquire a certain number of kills, they go into a Phantasm of Blood Rage that gives them added powers to see the primal
Ur-Brugga hidden behind walls.

After a swig of Ur-Brugga is when the combatant starts the metamorphosis into the Unnamed Horror.

Deep in the forest is an ancient altar, a sacrificial arena built in the honour of Teiws, the God of War. Altari is the only area safe from the depredations of the flesh eating Myrcki. The flesh eating locusts dare not invade the sacred arena of Teiws. 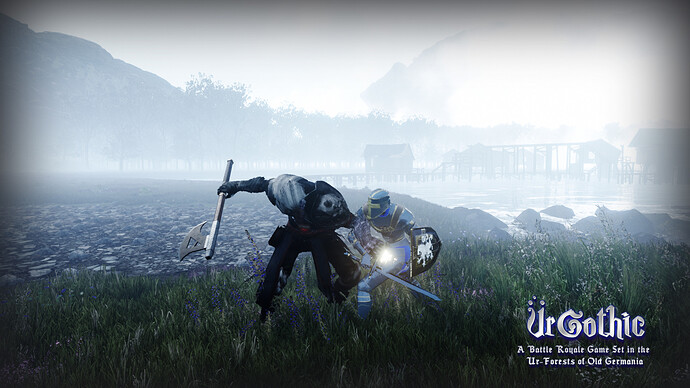 On the altar stands the Ur-Hamar, a weapon terrible to behold and devastating to wield.

Once a player captures the Ur-Hamar he or she is immediately transformed into a Berserker with Jaegra like swiftness and agility.

At this point it is pretty much game over. But behold, even a Berserker with a Urhamar can be killed if hit enough times from a distance.

It is almost impossible though to best a Berserker with the Urhamar in melee combat.

The essence of the gameplay is to start moving towards the Altari, which is indicated in the minimap by a glowing blue circle, as soon as the game starts.

Along the way the player will vanquish any and all enemies encountered, hunt for weapons in the huts, loot caches for the life giving Galdurbrugga and keep accumulating enemy kills.

With enough kills the player is transported into a Phantasm of Blood Rage that gives them special sight to locate the elusive Ur-Brugga, oftentimes hidden behind building walls.

Once imbibed, the player goes through a frightening metamorphosis and out jumps the Berserker looking for more blood.

The player must move towards the Altari to escape from the ***Myrcki ***as this sacrificial altar of Teiws is one sanctum that the flesh eating Myrcki dare not invade.

As all the other players will invariably be moving towards the Altari, combat will get more intense near the Altari. Once inside, it will be another battle to capture the UrHamar.

Once the player has the UrHamar he or she will be instantly transported into a Berserker with Jaegra-like agility.

If the player was already a Berserker before capturing the UrHamar, he or she will immediately acquire the superb agility of the Jaegra and from this point it is but a formality to swat out the remaining enemies inside the Altari.

The last player standing becomes the Keeper of the Ur-Forest.

The game creator Sivakumar Kanakraj AKA Fred The Coder (Plus Infinity Studios) is an ardent fan of JRR Tolkien.

Apart from the Lord of the Rings, the Hobbit and the Silmarillion canon, Fred reads other works by and about JRR Tolkien.

For some it might come as a surprise that Tolkien was a world class linguist with a special focus on the Germanic languages (Old Norse, Anglo Saxon, Old Frisian, Old German among others).

Tolkien mentions in one of his letters about the now extinct Gothic language.

It has long been a debate among scholars that Gothic might be the mother language, the Ur-source of all the original Germanic languages.

Fred has been fascinated by this Gothic language for some time and has had a dream of creating a game based on this half-forgotten universe.

UrGothic Battle Royale is his dream game set in the Gothic Midjungards!

Wishlist us on Steam! 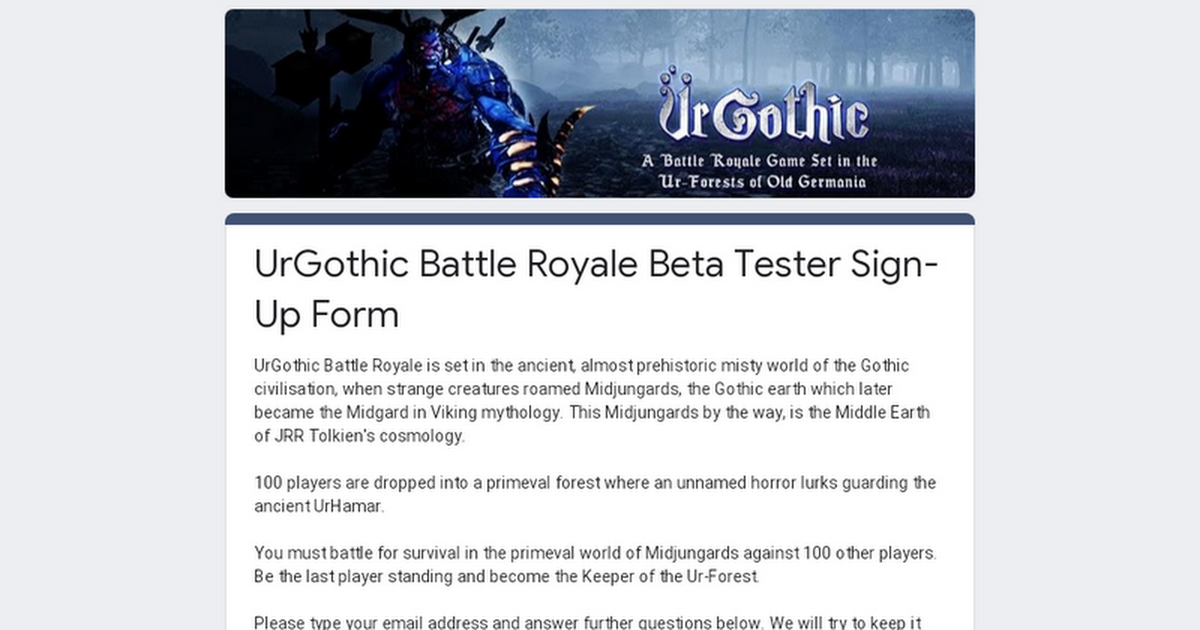 UrGothic Battle Royale is set in the ancient, almost prehistoric misty world of the Gothic civilisation, when strange creatures roamed Midjungards, the Gothic earth which later became the Midgard in Viking mythology. This Midjungards by the way, is...