hi !
i have created a main widget ui containing a (multiline) text box.
during game play i create buttons. how do i target the text box of the main ui from those dynamic buttons ?

attached graph from the button

Now you can choose whether you want an ugly way or a clean one.

A.3. Go to your button widget class and make variable that will hold reference to your main widget. A text variable that I used is just for testing so you can ignore it. Here’s the setup:

A.4. Go back to your main menu, and adjust your logic related to creating buttons and fill the main widget variable. Like so: 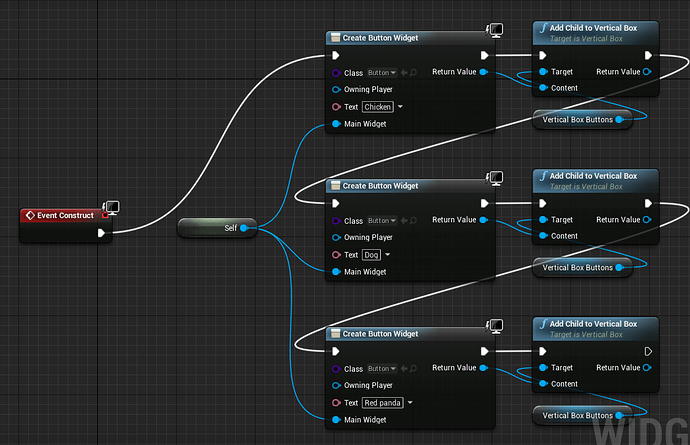 We’ll use use event dispatchers for this solution.

B.3. Go to your button widget class. And create event dispatcher. I called it OnChangeTextRequest and set it up as the pic shows.

B.4. Then again, we have to alter your logic related to creating button widgets. Here’s the example. 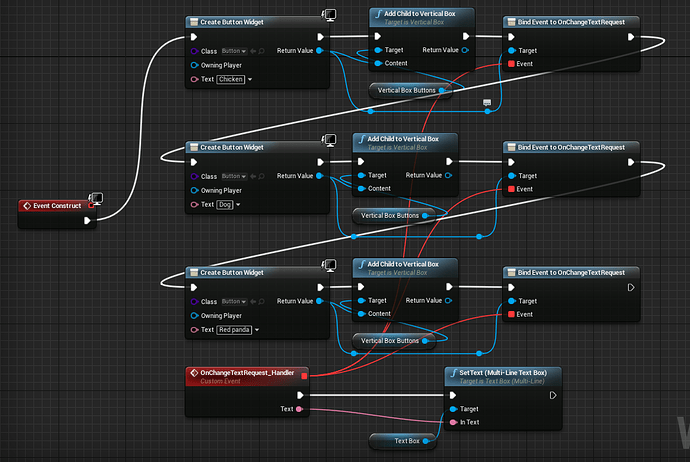 perfect ! i went the ugly way.
is there a reason why one way is considered uglier than the other ?

may the flying spaghetti monster bless your node links ! noodles

It’s ugly, because other widgets are directly playing with widgets that doesn’t belong to them. Ideally when you have a widget/class A, and couple other widgets/classes like B, C, D and they aren’t meant to modify only their own stuff so the actual owner of property/widget/anything controls how it changes.

So for example instead of directly accessing text widget from buttons, it would be a bit easier to have a function in main ui widget that takes as input Text you want to put in text block and you’d call that function from buttons.

i see; thank you for taking the time to explain