Precompiled binaries (PCBs) of an editor built for a project are useful if a team has content creators who don’t need to work with the code base or rebuild the editor in order to create content for their project. To enable users to download precompiled binaries, a zip file containing the required binaries can be submitted to Perforce. UnrealGameSync will then sync and extract that zip file instead of compiling locally.

Doing this uses the same user interface as compiling locally, but any changes that don’t have matching binaries will be greyed out. Once configured, users can opt in to using precompiled binaries by checking the Sync Precompiled Binaries item under the Options menu.

Without going into great detail on what’s required from a connection or network configuration standpoint, we’re going to detail what users will need in order to use Precompiled Binaries with their Unreal projects and engine. To set up a Perforce server’s contents for use with UGS, there are a few things to be done.

Users will need a single stream that contains their engine source code, dependencies that aren’t generated by Unreal Engine’s build process, and their projects. 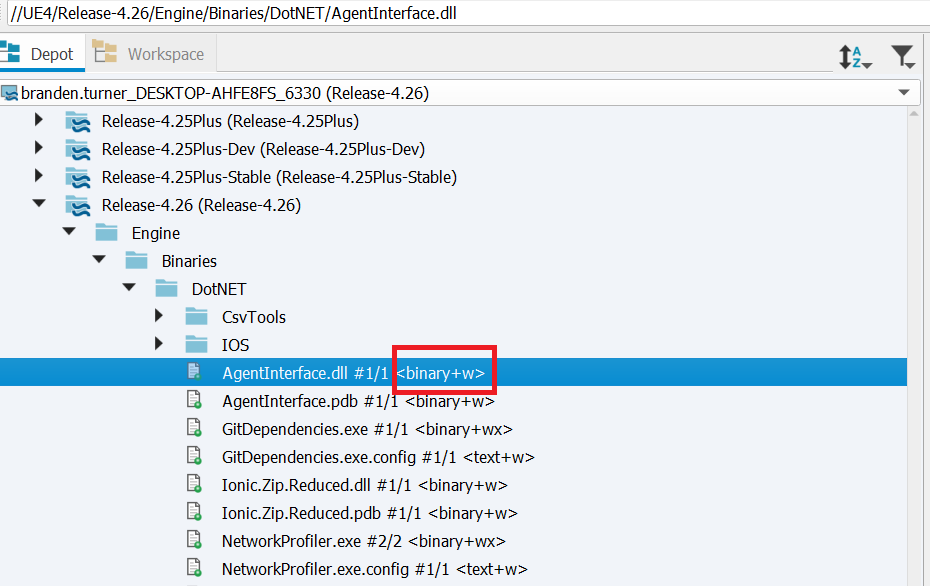 If you find you need to change the file type or permissions in your stream, right click the file after opening it for edit, and click “Change Filetype”: 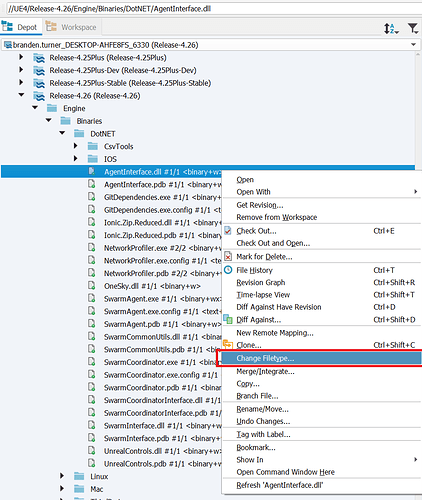 This will open up a menu that you’re able to edit the file type and permissions to match our release stream.

Note: if you get an “Access Denied” error for a specific file during a build or at runtime, it’s most likely due to these permissions not being set up properly.

Note: UnrealGameSync.ini is required to be in the location [Project Root]/Build/*

After the two streams are set up and users have permissions to access them, it’s time to generate and upload the PCBs to the designated PCB stream.

To generate and upload the PCBs:

In this example, ShooterGame is a native project, and any projects users want to upload PCBs need to be native as well.

Note: Additional information about using BuildEditorAndTools.xml can be found in the comments at the start of the file.

Note: ArchiveStream needs to match the ZippedBinariesPath specified earlier, but instead of the ‘+’ characters to escape the slashes, slashes are used.

Note: Make sure CL descriptions are in the right format. UGS expects each CL description to start with [CL nnnnnnnnn] so it knows which changelist the binaries are associated with

Note: PDBs are included in this zip file, but they are stripped to reduce build size. This will allow callstacks to be gathered from crashes, but not allow for full debugging. If a team needs better symbol storage, they’ll probably want to use a symbol server, which is left to their IT and Deployment teams to implement.

After the precompiled binaries have been successfully generated and uploaded to a secondary stream, using the files located in the primary stream, UGS should be able to detect and use PCBs with the main stream.