I do not understand the lightmap textures that are generated when building and I can seem to find any information on them. I’ve worked with Unity and I’m trying make a logic connection here. With a basic scene with only a cube and a directional light, there seems to be 4 colorized textures that are generated. What are the four different maps? What are the colors for? In Unity the only reason a lightmap is generated like this is due to baking the world space direction. 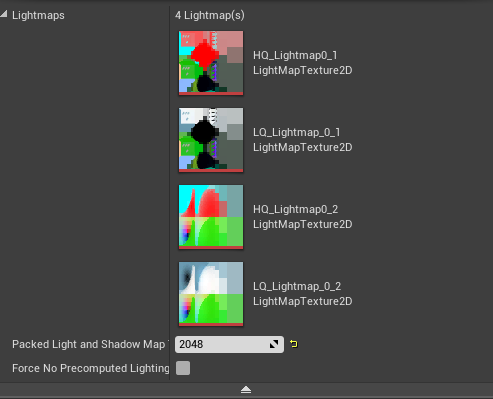 Unreal generates multiple maps with different data on them. There are maps for luminance/color and directionality. the other stuff seems to be the mipmapped versions of those maps. But you shouldn’t really need to know what’s on them, unless you’re doing something special with lightmaps, as they are handled automatically.

If you have multiple lightmaps you will incur more drawcalls and batching will not be as optimal as it could be. Thats the main reason im curious. The second set of light maps seemed curious. My guess is that the second set is GI info. Knowing how they work could help with performance. Is there documentation on these?