Type of ArrayElement is undetermined. How to convert BP to C++?

Seems to me i found a bug. -_-
I’m trying to make my planetary system processor. That doesn’t matter actually… BP screens are here.

1.PNG1571×518 123 KB
Don’t think it’s usefull to show You the “SimulateGraviryBetweenTwoActors” method.
So, yes, this method was made to run through all the actors that are given to it and make something with each for each, excepting the current.
And i give it an array:

Aaand i have no idea what to do with that. I could make some typecasting, but i can’t figure out how to convert my levelblueprint to C++ code, and i also have no idea how to write the same in C++ as i don’t have deep experience with UE4 namespaces and classes.

UPD(2 times):
I tried to send the array straightly to the foreach. No profit.
I even found casting nodes and tried to use one. No profit.
And i think i should let You see the type of my array. Here is what i have now:

UPD 3:
I found Problem on all ForEach nodes - Programming & Scripting - Unreal Engine Forums
There is the same problem… Oky, i’m now trying to reinstall the engine.

UPD 5:
I was very bored and dropped it for some time. After some hours i became angry and made my own foreach specially for processing “Actor” type.
Suck this, stupid bug! 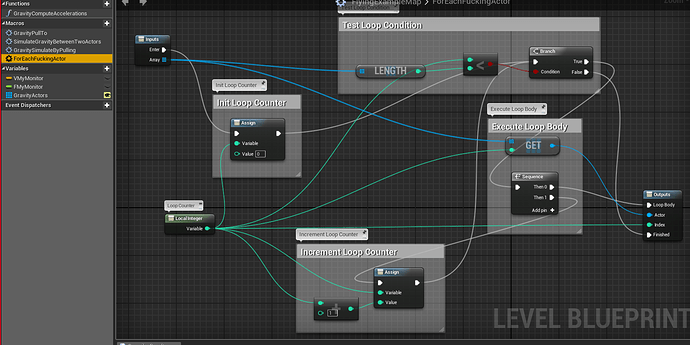 Tried making it a function rather than a macro? Maybe there is something wrong with macro pin inputs