So I think I tried everything possible but no luck. When the host/server kills a bad guy, it dies and all the clients can see it die and disappear. But when the client kills a bad guy, it just plays the death animation on client side but it is still moving and attacking on all screens. Pretty much, only the server can do anything to kill it. I replicated every single variable like health, isDead?, etc in my enemy blueprint. I made a custom function that destroys actor which runs on the server but when I call it, it does nothing if switch has authority is remote. I looked at tutorials but they only show how to replicate from server to client, not the other way around. How would I do this? How do you make a co-op wave-based shooter with this limitation? I must be missing something big. Here are some pictures that show my issues.

The picture below shows the different ways I tried to make this work but it didn’t. One thing I noticed is my isDead variable does set itself correctly on the client side. Also, the health does not update on server when the client damages an enemy. 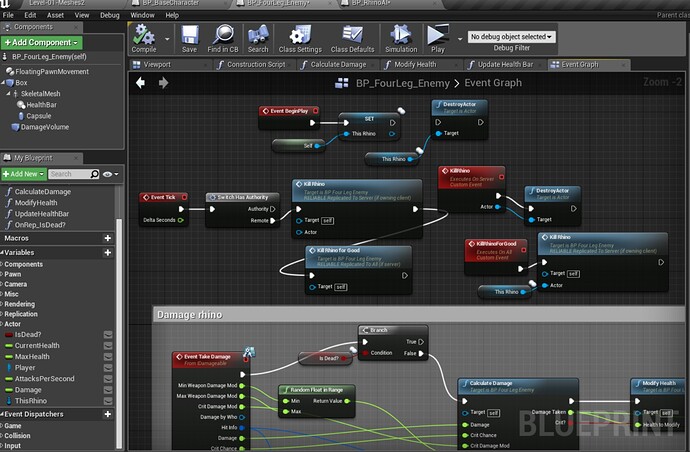 Actually nvm, finally figured it out after so long. I have to make the custom event in the player controller and call everything I want from player controller for it to work. I’m not sure if I made my game too hard to network. I feel like the way I structured everything with functions in functions, etc does not make my game network friendly since you can only make custom events replicate and not functions. What do you think, is that a big deal or it doesn’t really matter? Kind of new to networking and experimenting for things to work. I guess I should have started the networking part earlier instead of later.

I’m sure you have way more experience now, and am literally having the same issue with enemies only dying client side. Was wondering if you could explain better with pictures how you fixed this if possible