Stuck On trying to read text in from a Data Text Table - can't get it to work !!! But Reading text in from a array struct list to give me a random entry up in the widget works, , but for some reason it will not
work from a data text table…

The Code is incorrect somewhere but I don’t know how to FIX IT.

I’ve been stuck with this problem with reading text in from the data text table for THREE weeks now, Can please someone help
me to get this piece of code working?

I have alot of dialog in my game, so It is needed so i can display all my dialog from a data dialog text table instead of
reading the text in from an array struct list. The widget does work and is getting input when I hook it up into an array struct list with some example text entries
in it, but its not reading any text at all from the data text table for some unknown reason and that’s why I’m
really am stuck on this and I been stuck on this problem for three weeks, going onto a month now…

Someone in here surely must know how to get the array to work with a data text table to start
showing the text. What I can’t understand is why its not reading any text in from
the data table. but it has no problem reading text from an array strict list. But I need to read it
from the data table.

So what is wrong with it?

Or this is newer from January https://m.youtube.com/watch?v=Yd7MRWdTdl4

Tozan, just look at your loop - you execute it 4 times and read the very same line from the DT every time - row 3 - you are adding it to your array 4 times, the same DT entry. The green pin on the Add node is the index of the element in the array, so ofc it’s a number. If you want to see the content of the struct, you need to break it or split it and then do something with the data.

The working setup is still in the original thread #8.

Also, see if these comments help you, and good luck! 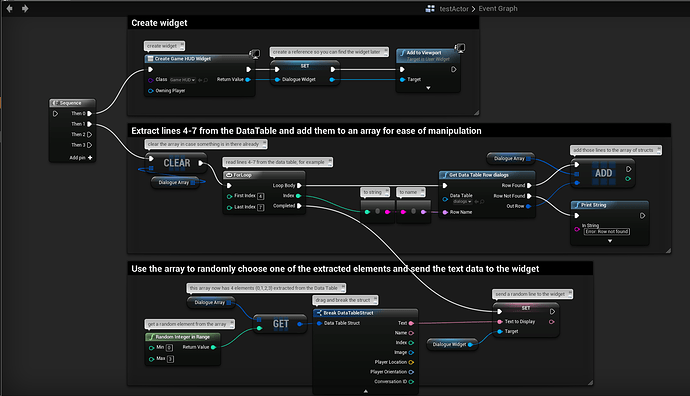 Everynone, thank you so much for your time and paitence for fixing the data table now that I can see all the connections I need to link the code up to, the text is now reading in from my data table, its now radomizing the entries so that issue has now been resolved. I have access now to my data table, but there’s just one issue left, its not waiting for me for as soon as I walk into the on overlap trigger area its changing the text around more than once on the screen , instead of changing the text just only once, it will change it twice or three or four times sometimes when stepping in the trigger… Its something to do with the on overlap trigger is triggering off more than once each time I walk into the trigger area. I’m not sure
what’s causing this unusual trigger behavior.

The tricky thing will be to get it to display also the correct Character Portrait up in the widget as well with the text.

I’d put a print node right after the overlap execute and see how many time it triggers. There can be many reasons, maybe you hooked something up to the loop rather than a sequence.

Yes its triggering it more than once, it triggers it when you step inside and also step outside the area. Here’s my setup.

Hmmm… I’m not sure where the delay has to go so that the text only pops up just once and resets the trigger again after I leave the trigger area.
Because at the moment the text remains up on the screen only for just a few seconds before disssapearing again not giving me enough time
to read through it.

I replaced the On overlap component with this on over lap actor event. I don’t see any change.

Why there are four nodes from int to enum to string? Well I couldn’t just link the two pins up, the Green pin called Index on the FOR LOOP NODE, and the Purple pin called ROW on the Get Table Data Node without having to add in all those conversion nodes to make the link. I now got one of my droids AI patrolling all around (i used targets for the patrol points).

I also need to know how big these level maps should be kept as Telos City is a outdoor City map, but I think 200 megs for a city map is a little too big. Originally the map was 70 megs in size. My city map is about about 1 km in size but not the whole entire map will have the nav mesh, only certain areas of it.