We are MountainWheelGames, a small team of aspiring game developers collaborating via the internet with the sole purpose of creating Stone Rage. Oceans separate us, few of us have ever met one another or even know what each other look like, but we know who we are through our collective work. We’re artists, we’re animators, we’re character designers, we’re writers, we’re composers, we’re programmers and we’re planners.

Stone Rage is a prehistoric, open-world survival game. Play as a Cro-Magnon or Neanderthal and shape-shift into beasts as you secure your place in a harsh landscape of dangerous animals, scarce resources, and unforgiving climates. Make friends and enemies. Build. Fight. Survive. 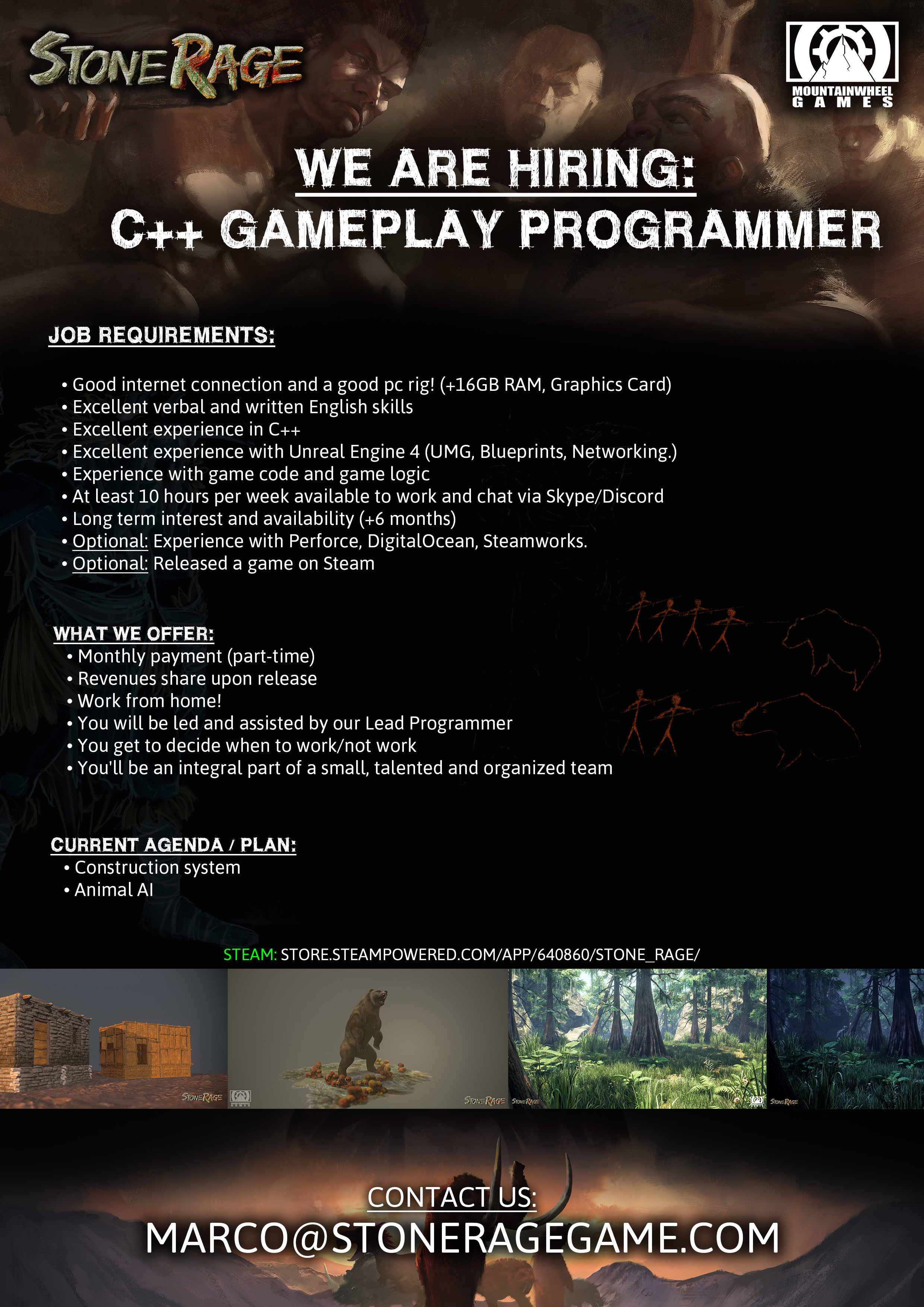 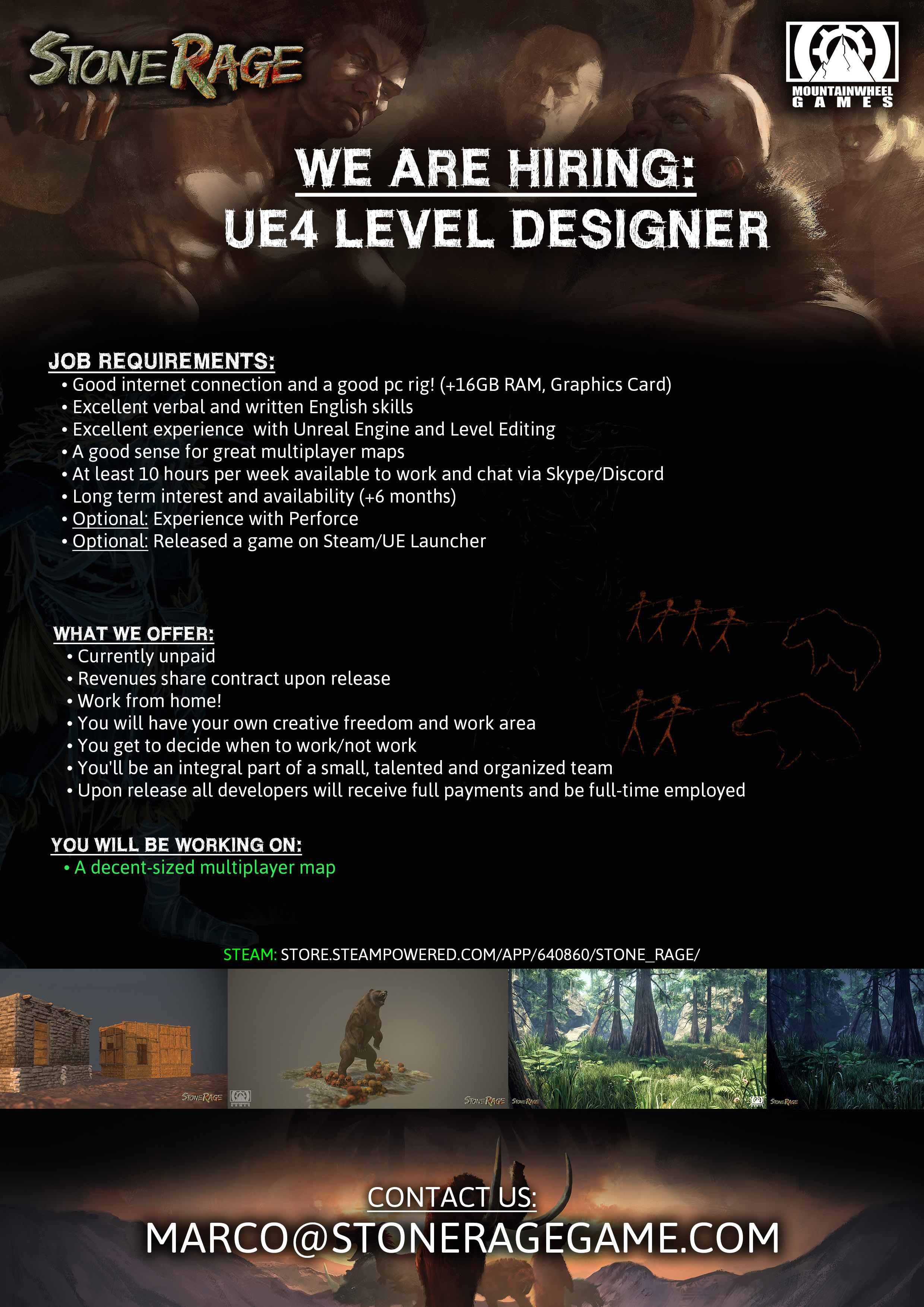 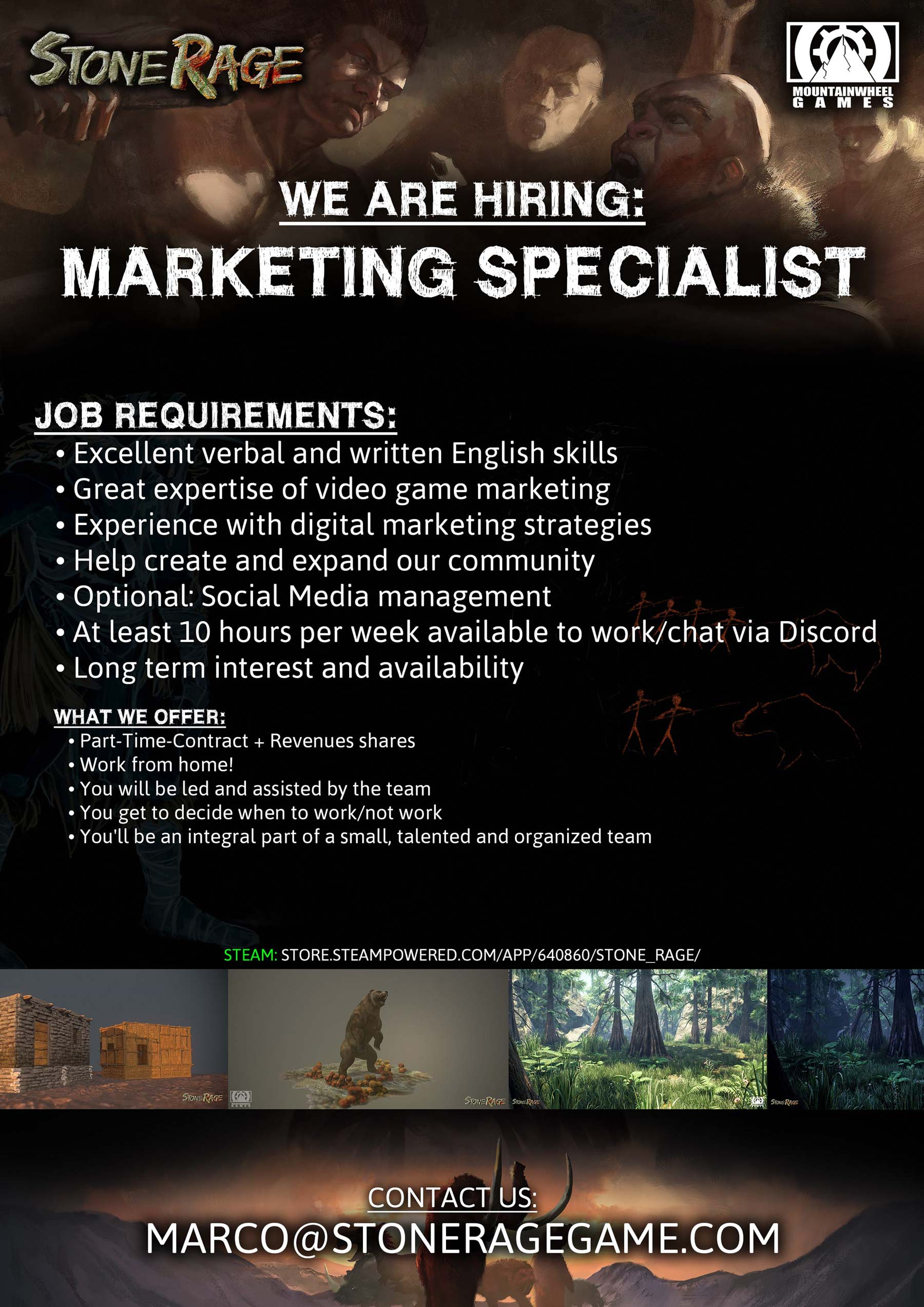 Are you guys looking for environment artists?

I sent you an email and would love to join if you guys would take me. i can do anything

Hello, do you need some music for this awesome project?

No, we have our OST finished already, thank you!

This looks great, I sent you an email.

I noticed you have someone called Daniel Chavez on your team; this wouldn’t happen to be a chavez that used to be in the original FarCry/crymod modding scene is he?

heh, wonder where he ended up…

I followed your progress every now and then on crydev.net and wish you guys all luck you need.
May i ask why you guys changed over to ue4 at the point where cryengine went eaas ?
Is it only the fact that you can pay ue4 once and still use it when subscription runs off or
are there other reasons and if which ?

p.s. i take it you guys loose alot of mapping work… actually quite alot !

Hi! I sent you an email for the sound designer position

Hey There!
Is the position for C++ programmer still available?

I really hope you guys make it to the Kickstarter phase with this, it looks fantastic! We’ve been known to help out with studios around that phase, so while we probably can’t do much today - keep me posted when you’re nearing Kickstarter status! We’d love to be a part of this.

Hey Ironbelly, thanks for your kind words! Fortunately we are not planning on doing a Kickstarter campaign and instead go directly on Steam-Early-Access. We are just looking for some more members to join us and speed up the workload, hehe! More news soon

I was like “I swear their post said Kickstarter…” well, good luck anyway, I’m rooting for you!

Hey, I am a 3D artist who knows how to model, texture and use UE4 to an extent. I know SOME blueprint but am learning at the moment. You can check some of my work out at my channel but especially this video on my most current project: UPDATE 12-8-15 Creepy UE4 Interior Environment Level - P.T. Style - Unreal Engine Editor 4 - YouTube

Yeah, that was outdated. Need to update all the recruiting threads! Thanks a lot, Ironbelly! Appreciating it. We’ll keep hustling and bring this to the finish line. No excuses!

I was like “I swear their post said Kickstarter…” well, good luck anyway, I’m rooting for you!

Sent in my application

Hi reok! Is registration going to stay down on your forum until you hire a CM? Just wanted to sign up and show some support