Hi, just purchased the asset, so maybe I’m doing something wrong, but Pressing “V” does not seem to change sights. I have added extra sight to barrel.

Hello and thank you!

Where did you add it? If it’s out of the angle limit, the code will prevent you from using it. Press Y to adjust the angle limit. If you want to use a sight in an horizontal angle, for example, the angle limit must be more than 90 degrees.

Here, I made a video of the issue i’m having, maybe it’s clearer. ShooterGunSystem Test - YouTube

Oh yes, I see what you mean now, thank you for making the video! 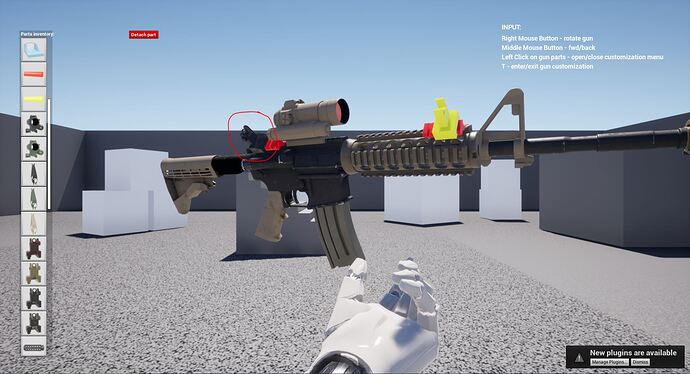 Regarding you not seeing the other player in multiplayer, check this setting before you hit play and make sure you are not choosing “Play Standalone”:

Awesome thanks, solved both of my issues.

Hi, not sure if this has been asked before, but is there a good/recommended way of handling left hand positioning? Either when adding a vertical grip attachment or switching weapons? I have a somewhat working solution but it causes the left hand to lag behind and stutter a bit, which is quite obvious.

I’m trying to avoid the huge ordeal of having separate animations for each rifle type if possible and solve it with a few localized blended anims for hand grip, or hand placement, if possible. But in an efficient way. So if you have any thoughts or ideas on how to fix the lag for the left hand position, I would appreciate it.

Figured out the lag issue, I had to transform from world space to bone space the location of the grip socket…

I transplanted ‘shooter gun system’ into my character.

However, the coordinate axis is Maya, and the location is strange.

Please advise on how to fix this

In this pic I’m typing the location and rotation values manually, but you could use a var (like you’re using) to input that. You can experiment with changing the settings on the right - ‘AddToExisting’, ‘BoneSpace’ - but if you’re using a var, like your transform that comes from a socket, you have to make sure the space used is compatible, as well as if you’re adding to the existing bone transform or replacing it.

Also, if your’e using bone space, you probably don’t need to grab the socket’s transform every frame, since it’s position in relation to the hand probably doesn’t change over time when you’re holding the gun.

Another important thing is that you’ll probably have to turn off that node in my pic when you play a reload anim, for example, because, since the node moves the hand away form its original position in the original animation, it won’t grab the mag at the right place and will look wrong. Just make sure you set the ‘Alpha’ of this node to 0 when playing the reload. It’s nice to also use the built-in interp option inside this node. for smooth transitions between on and off: 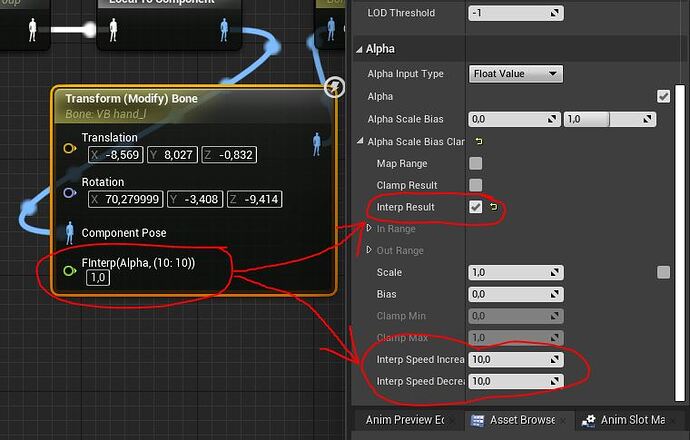 It looks like there’s already a bone there at the front sight (which I guess came from Maya), but that’s not a problem, just rotate the socket inside Unreal.

Also rotate your FP_Camera socket in your character’s head, so that the Z axis points up while the X axis points forward

Thanks, I’ll look into this, good idea.

Hi. I would like to ask if what parameters are available for the projectiles? Will it include gravity, wind and penetration parameters in the future aside from the velocity?

I also asked in the MP about having different FOVs for aiming and non-aiming. Thank you

Hello, gravity is already a parameter. Wind and penetration aren’t in the plans…

Regarding the FOV, this is the answer I posted to your question in the product page: to change FOV, you call ‘SeFieldOfView’ on the camera and type in the value you want. Do that in the EnterAiming event and in the ExitAiming event you call it again and type in the default FOV for not aiming (90 degrees in our case).

Hi. I have to commend again this system. I successfully transferred the recoil recovery logic to mym own character which blends FPP arm animations to a thirdperson mesh so that I only need 1 set of animations for arm-weapon and the rest are for the locomotion for the full body shadows and lower leg. I tried other recoil system/tuts before but this system really nailed it, especially the recoil recovery, and it is quite intuitive how you did that.

I am trying to get the logic out of how your weapon sway and aim offset. Looking briefly at the BPs it seems it is driven by IKs also? I am not sure if the logic I need to get is the one from the AB_democharacter AnimGraph. My current system uses transform bone and two bone IK with certain bones on the hand and the left hand is attached to a socket on the weapon. But I currently have problems when strafing as the wrist doesn’t partially rotate to the left or right. I want to adopt your system as it is more polished. Thanks

**
I think I found it, the update graph>directional sway?

Hi, If you have a discord group, please could you drop the link ?

Hey, thank you for your comments!

Yes, the weapon sway (due to mouse movements and strafing left and right) is handled in the UpdateGraph → DirectionalSway. From there the resulting rotations and locations are used in the Anim Graph to feed TransformBone nodes, which move the IK target for the gun hand.

When not aiming, it’s pretty straight forward - it just rotates the IK target and the only time it’s translated is when you’re firing and it moves backwards.

Now, when aiming it’s when it gets tricky, because I decided I should rotate it about the sight’s point, instead of letting the hand bone rotate about itself. This makes sure the sight’s point never leaves the center of the screen when the gun is rotating. So inside the DirectionalSway, in the aiming section only, you’ll find a bit of math that does that. This is ‘married’ to the CalcHandTransforms function in the gun BP, so in order for it to work properly it needs to remain married.

Another important part of this IK setup is the use of virtual bones as targets for the hands’ IKs. Unreal’s virtual bones snap to their non-virtual counterparts by default, so I have one for the right hand and another one for the left hand, this way I know they’re following the hands animations. But, in the Anim Graph, I have the chance of moving them in the direction I want depending on the situation.

Hi, I do have Discord, just sent you a private msg…

Hi, I just bought this kit, can I get the link to the discord please.

Yes, I’m trying to send you a private msg, but I’m getting a forum error. Could you please try either private messaging me or sending me email to peacesells_@outlook.com?

Thank you very much!!

Hi again. Do you think you could add an option where we cannot spam the left mouse button/fire even if the fire rate is slow? I noticed that even if I slowed down the fire rate of auto when holding it down. I can alternatively just spam the left mouse button and it gets faster. haha Also in semi… I assume we can sort of add a gate or do once? Thanks