Hey guys! Been tinkering with UE since 4.16 on and off, but only recently got really into it. Finally decided to try n make something workable. I got basic level design somewhat down pat, as well as simple UI aesthetics, so am now trying to work on adding functionality to my work to actually make my project DO things. I’m currently diving into the courses provided in the UE Learning Portal, and can’t help but work alongside UE’s teachings in my own projects. That being said, I’ve hit a bit of a road bump.

I want to preface the problem by mentioning that again, I’ve very little ACTUAL knowledge on how to add functionality to my project, and when I do when or where it is most appropriate to add said functionality. Still, in the following pic you can see what I’m working with.

The problem I’d imagine might be quite simple to fix for others, but I can’t seem to get it right, at least not without doing it this way.

I’m trying to get my player character’s Stamina stat to regenerate 2 stamina every second as long as it is below full. However, everywhere I’ve read basically warns against using “Event Tick” as, used enough, it can cause some serious issues, namely in FPS drops. Any help would be greatly appreciated! As I do plan on adding regenerative properties to a number of other stats in-project.

You’re right, tick is not the place to do stamina, especially if it’s once per second: 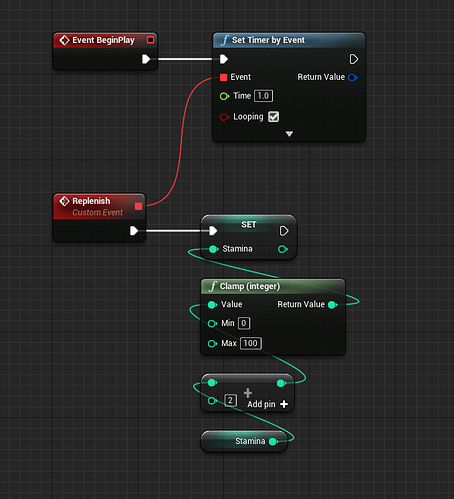