Rubbish Man. a bit of fun I immediately took a liking to Rubbish Man - and then he exploded!

Rubbish Man is a funny, cute character. Is his exploding a defensive tactic? Is he going to be a part of a game or a cinematic?

hi. happy to hear you like him.
its a game character. you start as a shoe by the side of a road (yes that shoe you saw out the car window) and build yourself from things you find, from rubbish.

you also build vehicles from rubbish. if you crash the vehicle everything falls apart including your character. i was testing that mechanic and thought it would make a funny little video.

Wow! That sounds so cool! It’s like cartoon meets gaming! Now that you’ve given me a little exposition, I’m more intrigued. Tell us, how did you come up with the concept for Rubbish Man?

the spark of the idea came from: in 2012 i made a lego car in the game Teg’s Playground where you could shoot the lego bricks apart. 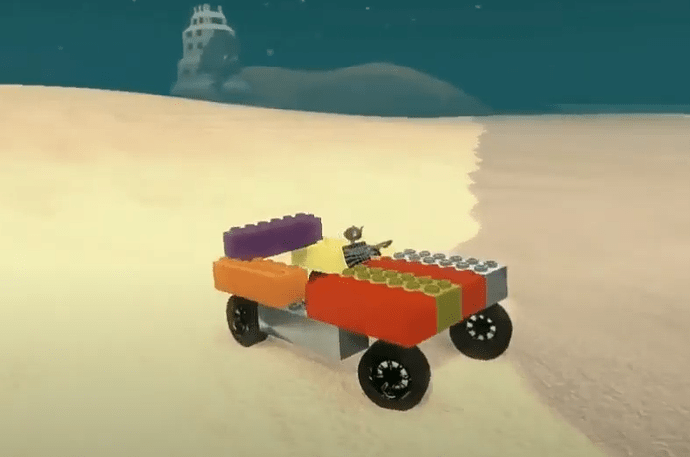 fast forward to today, the opportunity presented itself to go self employed. i made a couple of android games but lack of marketing expertise and the fact google and the tax man help them selves to 50% of the money i decided to go all in and make a PC game to the highest quality i could. hence Rubbish Man was born. 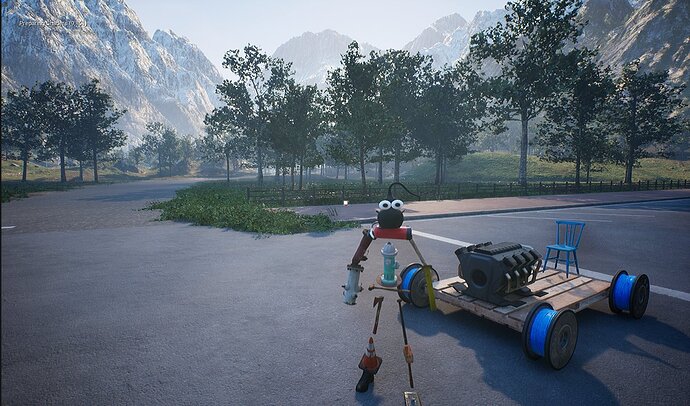 Hi @tegleg. This is looking like lots of Fun. I’m a huge fan of kitbashing large entities from parts & pieces. How far do you plan to extend on this construction/destruction process? If it were me, I would use it for all entities in the scene. I’m developing a Procedural Construction/destruction Subsystem based on similar method here.

because im a sole developer its a single player game, to make sure i can actually finish the game. it will concentrate on building machines to complete tasks. land and air vehicles but not water craft again to cut down the work. all the machines are physics based.
i started making it in unity but it just looks so 1990’s even with HDRP. i switched to UE4 and it looks great but the physx integration has got worse if anything. UE5 seems much more stable on the physics side of things.
im toying with the idea of adding animals and or maybe some kind of enemy, maybe not though. the core of the game is building things, the player using imagination and creativity to solve problems.

I’m solo as well. Because of this, I design semi-procedural/procedural subsystems for use in many games I plan to create alone. I aim for single modular solutions to solve multiple problems. In this case, I’m using this construction subsystem for many types of entities, especially for Golemesque Monsters.

You could consolidate the physics/suspension to solve both land and water craft (thinking hovercraft). You could also combine those mechanics with Flight mechanics to switch between air, land, sea modes on-demand for all in one solution.

The player using imagination and creativity to solve problems implies that certain parts do certain things and may/may not be compatible, thus finding and combining the right parts is a puzzle in itself. The construction method adds a whole new dimension to the implentation of CRAFTing.

that monster looks amazing. unreal lighting is very impressive too.

everything uses constraints, no line trace suspension or anything like that. i could make things float but i dont want to mess around with getting decent water interaction so i am avoiding water altogether.

you can connect any object to any other object with any type of constraint, hinge, wheel, spring etc.
objects with large surface areas, such as a door, have basic aerodynamics for use as wings. things like fans can be used as thrusters. engines can rotate wheels.
its possible to make pretty much anything including walkers.
the early prototype for the core mechanics in unreal engine was this [Android] Physics Construction Set

the game is also about exploring the environment to find the parts to achieve missions.

I had not considered using hinge, wheel, spring constraints on my monsters, but, i did plan some procedural animation, perhaps I’ll look deeper into using such constraints for it. The [Android] Physics Construction Set looks like fun and I can only imagine how gorgeous its going to be with UE5 Visuals.

just a word of warning if you decide to look at constraints.
ue4 constraints have a bad case of the jitters, they spaz out in ever increasing magnitude.

Epic are sticking to tradition and have broken constraints in the latest ue5 build. motors only work in 1 direction and you cannot lock axes. luckily i have plenty of other things to get on with while i wait for a fix.
you are right visuals do look really nice