Requirements for UE4 on OSX (and some bugs)

I’m just starting out playing a bit with UE4 and learning about the IDE, blueprints and whatnot. It’s mostly a pleasant ride and I haven’t had any crashes yet in perhaps 10h of using the IDE.

However, I find the IDE to be very resource heavy on OSX. I have a quad core 2.6GHz i7, 16 GB memory, SSD and a Nvidia 650M 1024MB and starting the IDE gets my laptop fans screaming for mercy. As soon as I do anything in the IDE the fans start and if I leave it be for a while they relax again. Trying out some of the simple game templates (like Flying) I find that the rendering is a bit choppy, but seems to reach at least 30 fps for the trivial templates. 30 fps is ok for developing and testing with, but I expected more from such a trivial scene. At some point UE4 itself noticed that the rendering had been <10fps for a while and recommended that the quality settings be lowered. Now my scene looks like a software rendered thing from 1997.

Is there any way to get the IDE to be less resource hungry when it comes to GPU (I guess, the CPU does not spike)? I don’t see why it has to suck so much performance even though I just click around a bit. Other IDE:s like Netbeans, Unity and Eclipse work fine without screaming fans when I use them.
To me my little laptop should be quite capable of showing an UI and doing some light visual editing, it can even run non trivial games, so I guess there is something that I do wrong?

Noticed that I can’t undo anything in the IDE. I wanted to undo a big pillar that I by mistake sculpted into my terrain. The undo/redo menu text has been like that for half an hour now, I guess it’s died a little internally? 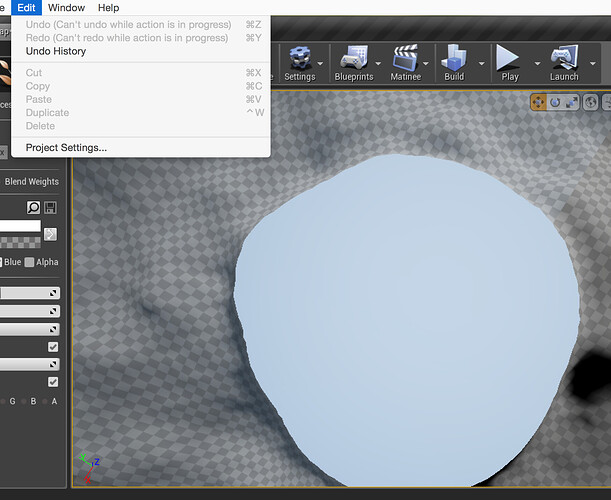 Seems that it’s also not possible to easily get back tabs that you close in the blueprint editor. I closed the “event graph” tab by mistake and I can’t find any way to get it back.

Closing the blueprint and reopening it doesn’t restore the tab. Other blueprints have the tab where it should be.

Noticed that the initial UI overview tutorial refers to a menubar where it would likely be on Windows. This is not where my toolbar is on OSX. Also the short tutorials mention the Control key a few times which is wrong, the Cmd key is used on OSX.

I guess this all sounds a bit negative, but I’m not exactly having the best first impression here. OTOH, the tutorial videos of which I watched about 50-60 of before diving in are the best tutorials I’ve seen, truly awesome.