Those of you who have been here a long time might remember some posts from years back about a mobile game called Republic Sniper:

There’s a long story behind what happened to the project that I’m not going to get into, but the game lost funding and was cancelled in late 2015 or early 2016, just as we were putting the finishing touches on our first playable demo. Most of the team was let go, a few were shifted to other projects, but we all stayed in touch over the years.

We figured the project was dead and lost to time, but one of the original team members recently got permission to continue development and use the IP and assets. We dug up the original UE4 project (we started prototyping in UE4.1 and were using 4.11 when we got cancelled!) and got it running on 4.25. We’ve moved away from doing a mobile game and are now working toward a PC/Mac game, with consoles as a crazy stretch goal.

And we’ve started up an itch.io page for the game as well, though haven’t made any builds public yet: Republic Sniper Resurrection by Republic Sniper, Distraction, tingham

We’re super excited to be working on this again. We’re happy to answer any questions you might have. 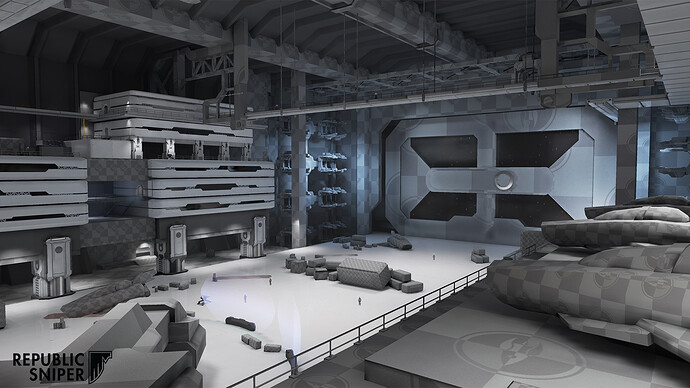 I remember this. Glad to see you back.

I remember this. Glad to see you back.

Thank you! We’re glad to be back.

So, we haven’t released a build, but we have been testing out an automated build process that uploads to itch.io automatically, so we have actually uploaded several builds. Our current uncompressed build is a little over 3 Gb. The compressed size is about 1.6Gb. We had no problems uploading using butler, itch.io’s command line tool. It doesn’t seem to do the size check that uploading on their web site does.

We have an alternative way to host the builds if this stops working, but as of right now, we’ve had no problems.

A little late with our Screen Shot Saturday post this week, and a little distracted by the US Elections, but latest update is out: Log in - itch.io