Apologies for the two posts in the row for help but this project is due at 8:30am and it’s 3:30 now.

As stated before, I have a maze and every time I hit the box trigger to play my wall matinees my camera flips out andIi get these errors: 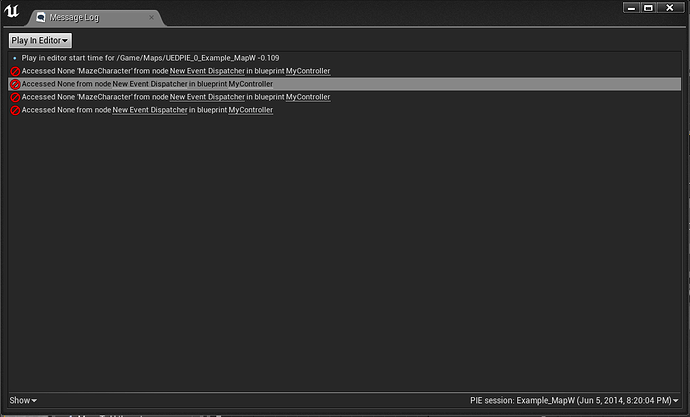 Can someone help me translate the errors or understand why my camera flips out?

Please show us the MyConroller blueprint and explain what MazeCharacter is supposed to be doing.

MazeCharacterClassPic.png3743×794 420 KB
Maze Character is my blue guy in the map. He run’s around as the maze walls, rotate trying to reach the end of the maze. If he hits a wall, he is supposed to respawn at the closest “respawn point” AND this is a picture of my controller and its various tabs. 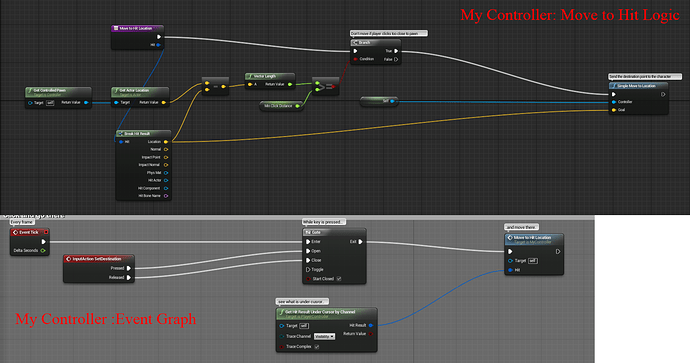 MYController.png1557×820 175 KB
On top of those errors, when my walls rotate with a matinee… my camera seems to lock and not move. I have no idea why. ALSO, there is a random purple “Return Node” and i dont know what it does or how it got there… this project is a mess

An “Accessed none” error comes up when something in your graph is trying to read information from a variable that isn’t there. So somewhere, one of your “Set ___” nodes is either not getting the target it needs, or the target is getting destroyed (do you destroy the player pawn at some point?) and then it’s trying to get something from a variable referencing an actor that’s no longer there. I’m still not quite sure what’s going on from the screenshots you’ve posted, but I do see a “Set ___” node for a transform variable in your “Set Checkpoint” function that has nothing connected to it, so hooking something into that might remove one of the errors.

Unfortunately, the accessed none errors sometimes don’t list the correct node as the culprit (it’s in our bug database; hopefully will be fixed soon), so they can occasionally be misleading. One thing that might help is setting a breakpoint (select a node and hit F9) where you think the problem is starting, then using the stop buttons at the top of the blueprint to scroll through the sequences one step at a time until you see something that doesn’t look right.