I have used Unreal Engine until UT3 (UED3) and then I stopped after Unreal Engine 4 was released. I never got to know the newest engine so I have one newbie question. Please help me to understand the difference to the old engine as good as possible.

My general issue is that, I feel turned off using the newest version, because it seems to me, that in the newest version everything consists of static meshes, although the engine provides some primitive geometry tools, the maps do not consist of BSP and static meshes anymore, instead it is all meshes imported from software like Maya or 3dsMax. What I find annoying and difficult is that now, every little peace of geometry is modelled and it seems like nowadays it takes much more time and effort to create a basic map.

Before you subtracted a cube and you had a room, now you build the room wall by wall, because each wall is a mesh. It feels more complex and requires more time.

Do you agree? Or what is it, that I have gotten wrong?

I don’t see this changing… ever (or at least not in the foreseeable future). BSP is slow and inefficient, which is why no one uses it anymore. It’s painful to work with and in most cases for anything more complex than a box or a staircase, it’s going to be way faster to model it in an actual 3D modeling tool and import it.

There are experimental modeling tools in the editor now (as a plugin you have to enable) that will make it easier to generate better meshes inside the editor and probably make certain tasks when working with Nanite a lot easier in UE5. But at the end of the day Unreal is not a 3D modeling tool, it’s a game engine.

the maps do not consist of BSP and static meshes anymore, instead it is all meshes imported from software like Maya or 3dsMax

How else would you do it in 2021? That’s the pipeline. But in the end it’s your choice, your product / game. You decide on the level of complexity and how many advanced overly engineered features you cram in there.

As you said, rudimentary BSP tools are in the engine: 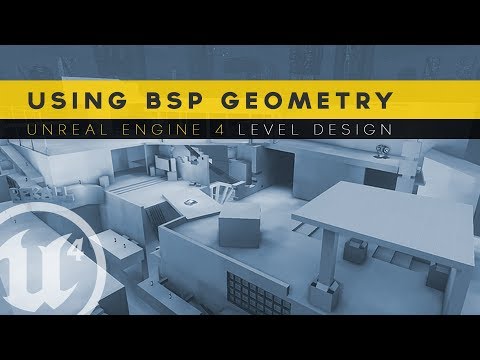 It’s mostly for blocking out until you replace it with the dreaded fancy static meshes. But you don’t have to, who’s gonna stop you? The Static Mesh police? I don’t think so.

You can also (and eventually should/must) convert the BSPs to static meshes.

I actually don’t know what the question is. Then vs now?

When I was building q1, q2 and q3 maps, things were easier, sure. What’s considered a blockout now, was the pinnacle of geometric artistry. Luckily, folks dig minimalism. More than ever before. Look at all that pixelated, nostalgic stuff (which is somewhat hard to do right!).

Not a bad question at all. But something to take away maybe is don’t expect a lot of help on here. Epic excelled in killing off the forums in a slow process of decay from 2017 on. Will UE5 or the Discourse look change that? IDK… But its important that people arriving now understand that you need to be self-sufficient to progress at UE, more so than other engines. This community, this engine, isn’t for everybody, especially for those who need a lot of hand holding.

As regards what you wrote… Just to be clear, UDK released ~2010 was a game changer for pushing devs towards static meshes. All the built-in demos including Necropolis / Epic-Citadel / Jazz use SM’s not CSG. Coming from a COD Radiant background where geometry was the norm, that was a shock. But it was also a magical moment, where you quickly realize just how difficult it is to create nice art using geometry, when you can just do it all using Lego bricks. Think of the subtle details in Asian temples or a Middle-Eastern marketplace square. See if you can get your head around this, and realize that producing anything of quality is far easier using SM’s or modular bricks. Its also much faster as a workflow than you realize, as you can group / prefab / blueprint re-usable sections. If you can’t get there yet and see the larger truth, then these past threads may offer some familiarity / consolation and act as a bridge… Good luck!

So, I’m coming from the Radiant and Hammer realm. There, you can pile THOUSANDS of BSPs into your level without any performance hit to the editor and always be working and seeing your level in 3D. How do Unreal level designers cope with BSPs that force you to disable real time updating before you ever hit 100 of them? I opened up the demo maps that come with the new Unreal Tournament (CTF-Crash Site, CTF-Dam) in editor and realized that, holy cow, these levels are entirely BSP. I can only imagin…

I am wondering if there has been any progress on getting Radiant-like or better CSG / BSP mapping tools ? Or is it one of the low priority projects ? Thanks.

I haven’t really played around with Lumberyard (or Cryengine for that matter): What is their level editor like? Is it similar to Hammer? ~ Jason

Thanks Alexander, this is really relief to hear. Epic is full of surprises. Someone has very good mockup here but you know best how to do it.

I also used unreal 3, source engine, 3d game studio, and hell no, mesh is a lot of faster / prettier.
The concept of using meshes is used in UT3 and bsp was relegated to the floor. If you did modding for UT3 or gear of war, the change to static meshes was already very present.
and the white papaer about static meshes and modualit was for UT2
https://docs.unrealengine.com/udk/Three/ModularLevelDesign.html
I feel absolutely zero nostalgia for bsp.

Well I entered environment development, as well being a long time user, using 3ds Max as my weapon of choice and with strong FBX support Unreal 4/5 has made inroads into the world of common use 3d applications that includes vis, and real world practical use. Unreal 4 is more about being a real time interactive and rendering environment than just a video game engine.

A lot of the tech in UE4 is not new, more so when it comes to making use of real world models, as well as real world measurement systems, not used in previous Unreal engines, so by extension adjusting to the requirements Unreal 4 has not been that difficult and I’m sure that Epic could fill in the blanks as to how popular their product has become in other industries not relating to video games.