Here’s the AnswerHub post with details, but here’s a preview of the nonsense that happens if you start a UE4 project while standing at the edge of the guardian: 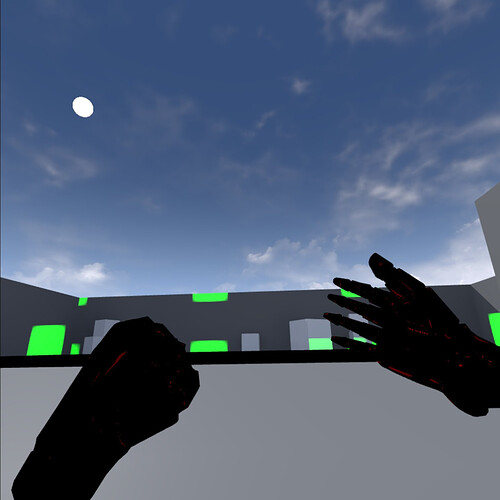 Also, here’s the tutorial I’ve been following to try to implement ArmSwinger. It works fine on Vive, but doesn’t work at all on Quest. I have no idea why that would be the case. Grabbing PickupCubes with the triggers works fine, and it also works with the grips if I switch the inputs to those, but the triggers (now proven to work) don’t seem to run the ArmSwinger code. Here’s a link to the plugin.

Edit: The secondary bug is caused because pulling the trigger on a motion controller enables collision (including with the player’s character), causing it to push the character it’s attached to away if it close enough when that happens. Changing the collision response to ignore pawns fixes this. However, the unrelated issue resulting in the graphical artifacts above is still present.

The VR template has some unique .ini settings -

Ah, didn’t know you’d also respond here. I figured wherever the conversation started, it would continue there, and I could just update both when I got the issue resolved. In case you didn’t see the other comment, that change didn’t have any noticeable impact.

Given that I’m fairly new at UE4 development, and that this bug happens before I even introduce any of my own code, I don’t know where to begin to try to troubleshoot the issue. All I know is that if I recenter the guardian towards, say, one end, then walk to the other end and start the app, this happens every time. It has something to do with being some arbitrary distance from the center of the play area on startup.

12/29/19 edit: I don’t wanna start up a whole thing about it, so I’m editing this post rather than bumping the thread, but out of frustration with the lack of support and the quiet dev community, I ended up moving on to a free and open source engine you’ve all probably heard of (or have been “waiting for”). I even inquired about the paid Unreal Enterprise service, and was completely ignored.

For comparison, when I ran into problems with that other engine, I was able to very quickly speak with some of the people responsible for maintaining its VR capabilities, and identified a bug that ended up getting fixed in a matter of days, and rolled into an official (beta) release within a matter of weeks.

Again, to be clear:

Big time game engine UE4: Unhelpful response after several days of waiting, with months of no follow-up and no fix. Attempt at obtaining paid support met with silence.

To anyone that stumbles upon this post, know that as of right now, there are not enough people making VR games in UE4 to get much support with that use case from the community, so you’re on your own unless you already have Unreal Enterprise, in which case you could probably just ask co-workers for help anyway. To fellow indies, if you aren’t super entrenched in UE4 yet, try finding another engine. In 2019 (and probably 2020, also), you’re gonna have a bad time with UE4 for VR.