Ok so I’m doing a side scrolling platformer and wanted to have platforms that used physics to move a bit when the player jumps on them (not so much that it causes the player to fall off though), so in this example when they jump on the giant leaf I want it to actually look like weight is being applied to it appropriately so making a physics asset at first seemed the way to go. In fact for other assets its seemed to work in a way that’s close enough to what I want although it’s been hard to get the desired result, but for this leaf I cannot get it to work in an at all decent way.

It seems to not matter how much I constrain the joints, even if they are fully locked (which apparently doesn’t mean locked at all) they move way to freely when the character jumps on them as if the constraint was very loose. Am I missing something here?

I’m getting the feeling that these physics assets are pretty much only intended for characters/rag-dolls since no matter how I change the settings I can’t get the constraints to even be ridged enough to use as something that can be jumped on, never mind ridged and moving in such a way that makes it feel like a giant leaf.

Does anyone know a way I can get his to work how I want? Otherwise I may have to think about creating animations and try to hook them up in a way that makes it appear that weight is being applied to the leaf appropriately which probably wouldn’t be too hard but its not preferable. 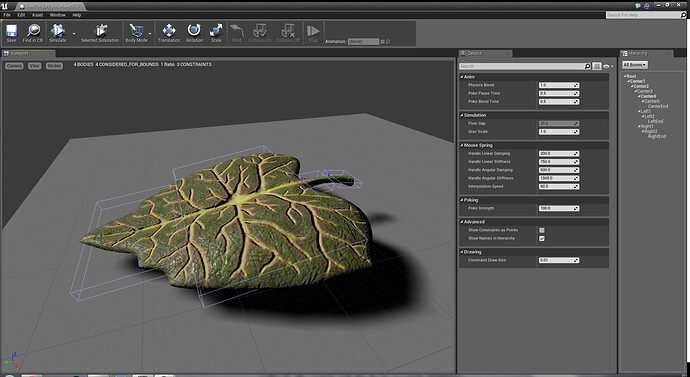