Now, I understand the engine is getting bigger. But… I feel like maybe this has gone under the radar for far too long… 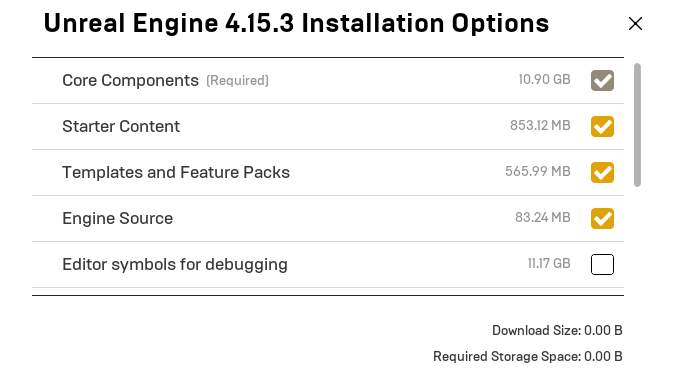 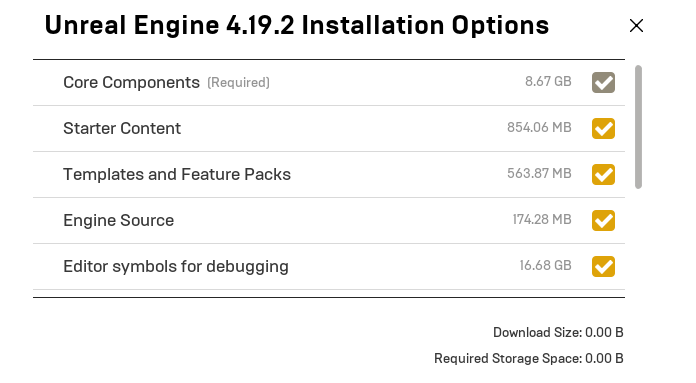 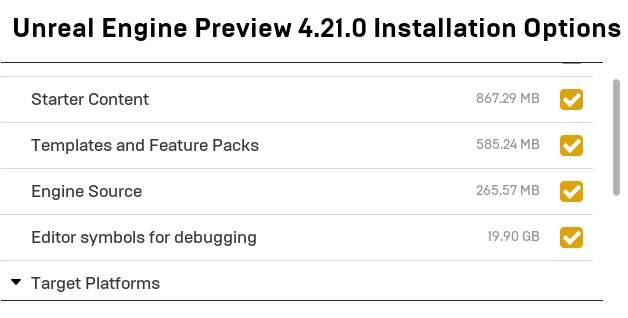 Can anything be done before Debug Symbols are 100GB? 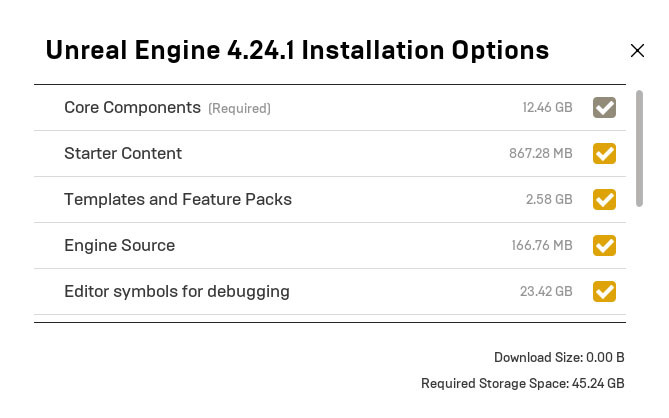 20GB to 24GB for Debug Symbols

Sure we don’t really need starter or templates…but it’s basically 16GB to 45GB in 14 versions.

Someone ping me in 3 or so versions if you can remember.

@VictorLerp @Amanda.Schade If you could just ping the appropriate folks. Not everyone wants to download 100GB Launcher Engine Version builds in the future.

There are clearly parts that some folks are just never going to use.

Possible Idea (not sure how feasible) Allow us to download what we need as we need it. Especially the debug symbols. Example. If no one is going to ever bother with VR. They uncheck the XR checkbox, launcher build does not have XR plugins at all, or symbols for them.

Again, this could be a pipedream, but could be interesting to get a real conversation going at HQ.

[Possible Idea (not sure how feasible) Allow us to download what we need as we need it. Especially the debug symbols. Example. If no one is going to ever bother with VR. They uncheck the XR checkbox, launcher build does not have XR plugins at all, or symbols for them.

Just to echo what was said…

For what’s it worth. The mainstream isn’t retrenching from VR. It was never mainstream and XR games made $6.3 billion last year.
And I see a lot of different opinions from yours

Of course, it should be always an optional “component” to download… Also, Datasmith should be optional… It seems like Epic forgets to update “component” selection while adding new stuff…

Fortunately, they actively work on the better separation of the engine, but this is a huge undertaking. They started from reorganizing engine architecture to move platforms (i.e. Playstation, HTML5) to an entirely separate folder. Hopefully, they’d do the same with mobile platforms. And then they could extend on excluding “sub-platforms” like XR.

And this would be even more useful for the source builds. This is seriously annoying when you have to learn how to exclude mobile content from your build

Having to download SYMBOLS to debug vanilla editor installs on new rigs isn’t practical advice, especially when much of the world doesn’t have workable internet…

Seriously? The developed world doesn’t have problems with downloading 50 GB to play a single game or watching Netflix (which switched from renting DVDs to streaming because of faster internet) or constantly streaming Spotify music.
20 GB for the flexible indie-to-AAA engine + 20 GB for optional symbols? Is it that big nowadays? It could be a bit smaller, but the general codebase grow and it won’t as small as UE 4.0

Yes, fast internet IS abundant no one has denied or will deny that fact, but which is also a sad fact many must deal with,is ridiculous prices for said internet that while on its own may( for a few , who cares) may be a non issue, for many, I’m sure is a big budget decision for many of us, regardless that our voices may be ignored.

Eveything I look at on list as noted by Victor I get a tad of a sad face over ,because not being rich, or necessarily comfortable but missing no inspiration or capabilities , makes the equation much more difficult. Also of concern sadly for some, is also ssd/hdd space( some may say why BOTHER with game dev then wa wa,), the former which everyone know is nearly mandatory for game dev ease of work, and is why I must pass on many things, tho my willingness to work hard TO that end isn’t damaged whatsoever. One mans junk…another’s pocket.
Oh and btw, I rarely have problems with Netflix,but lets not get started on Xbox One S > Youtube app, which frequently has lag issues, maybe apples -oranges but hey there again, availability of one persons funds vs speed compared to another.

Personally I’m overjoyed to be part of the ‘process’, rough spots and all, but in no way does it mean things as are, aren’t problematic .

I don’t know enough about those installation packages to give input on it, basically when I read ‘symbols’ I think of icon pack.

However somewhat related are the Quixel Megascan packs from the market. The QM packs are all defaulted to 8K, yet most people probably do not use above 2K, and installing a pack each with +20GB in filesize, and download included is imho bloating. Thus, an option to select target texture size should be optional, like they implemented it through the QM plugin. This would be a great feature for all content packs, since it would considerably reduce pack related tasks for texture optimizations.

20 GB for the flexible indie-to-AAA engine + 20 GB for optional symbols? Is it that big nowadays?

Victor’s numbers for 4.24 show its actually 12.46 GB for the core engine and 23.42 GB for Symbols though…So that’s almost double dude! :mad: But to troubleshoot a generic Editor install crash you also need Visual Studio… So how many more gigs does that add (including any extra vis studio dependencies)… Be honest??? :p… The point is this… It shouldn’t be necessary to download symbols when its a generic editor crash. Seriously, how many corps require users to download debug symbols and visual studio to debug generic software installs? Does Microsoft… Does Autodesk… Does Adobe etc… Simply put, there should be an easier way to debug generic UE4 installs on new rigs. The machine I asked for your help with before often crashes in 4.18 on a BLANK project just by using Ctrl+Shift+, (GPU Visualizer). Overall, Epic should offer easier ways to debug these kinds of crashes without all the extra downloads and installs. That’s all I’m sayin.

For what’s it worth. The mainstream isn’t retrenching from VR. It was never mainstream… And I see a lot of different opinions from yours

The article was interesting. But despite the title and opening paragraph, I still felt it supported my view more…

Which is, VR is very much about enterprise and niche markets. While the writer goes to lengths to claim CES was full of VR. It seemed gimmicky and more about promotion / marketing than anything real that consumers could go out and buy. For example the line about: Only 8 people out of throngs got to enjoy the VR experience - WTF? If anything that proves just how exclusive and niche VR really is… Even though I praised the tech before, especially in fields like Medical / AEC / Travel / Design / Automotive etc…

[USER=“69”]Doctor Ergot[/USER]
It shouldn’t be necessary to download symbols when its a generic editor crash.

How? Did you invent a way to fully debug optimized binaries which entire point to be stripped away from heavy debugging stuff?
Microsoft, Autodesk, and Adobe don’t provide source code or any way to debug their products for end-users. All you get from Windows is one of the thousands of error codes

That being said, UE4 is a very stable engine, I don’t see a reason for a drama. And it’s just 23 GB to download few times a year.

That being said, UE4 is a very stable engine, I don’t see a reason for a drama. And it’s just 23 GB to download few times a year.

It will probably will take up to 10 days to get all ~45GB (plus whatever Vis-Studio adds)… So I plan to wait until there’s a widely accepted stable build, whenever that is… Hopefully its 4.25 and not 4.30 though! But I’m not confident debugging with Symbols + Vis Studio will actually bring the answers that are needed. Here’s why…

For some reason the UE4 Editor is fundamentally unstable (4.10 / 4.18). It doesn’t appear to have anything to do with widely reported issues, like the DirectX-Lost-Device bug or limiting Hyper-threading. Disabling the RTX and using Intel Graphics confirms this, as does only using one CPU core using CPU affinity. There’s nothing useful in the Project Logs, and SysInternals-Procmon or MS-depends doesn’t turn up anything either.

At first, crashes appeared to be geared towards lighting / textures and the FPS template project. But further testing shows its ultimately random. The GPU Visualizer test is often reliable (causes a massive rapid memory leak). But reload the project and 5 minutes later its working again. The key points to take away are: The rig itself appears 100% stable for all UE4 packaged projects plus the UDK game engine, which is good news.

I don’t develop for VR, AR or mobile at all yet there are plugins that gets loaded on the editor for those slowing down the editor start up which is crucial since you need to reopen it every time you change header files. This is pretty important control to have.

Firstly, the VR/XR was just an example of something that could be compartmentalized out (especially since I am actually a VR Dev, but know others aren’t). Others like Datasmith (I’d never use) is another thing. UE4 is becoming less of a Game Engine and more of a “DoEverythingYouCouldPossiblyThinkOfDoing Engine”, which is good, don’t think I don’t think it’s good. But I feel IMHO that it would be nice to have better packages available, split up by “large disciplines” and even a “DoEverything Package”

GameDev
Enterprise
VR (which admittedly can be under Enterpise at times)
Etc.

These are just random examples. Just wanted to restart the conversation again.

Hey all - thanks for the feedback and input. We’re passing this along to see what options we may be able to provide.

The Plugins are the biggest chunk in the packages (> 10GB). If we could opt-in for them or download them from the marketplace instead. that would be great!

The Plugins are the biggest chunk in the packages (> 10GB). If we could opt-in for them or download them from the marketplace instead. that would be great!

I have to strongly agree with this, having a more cloud based approach for plugins and platform support makes sense! Having the plugins on the marketplace means those developers working on those plugins can release updates independent of engine releases. Templates which rely on plugins should perhaps be bundled with those plugins rather than with the core engine, have some sort of prerequisite check in the launcher when you want to use a template. Doing it this way means you can download just the template and plugins you need instead of them all, heaps of times over, for every engine even if you only use one or two of them.

It seems kinda odd to have the Editor the starting point and not the Launcher, the Launcher already manages quite a lot in regards to UE4 project so that also makes sense to me, then rather than doing add to project individually in vault you can use the wizard on the Launcher end to add all the packages you want when you create a new project

10GB given not everyone ( I feel the pain w/256gb ssd ) has huge amounts of space, or necessarily the bandwidth seems a tad non thought out, thus +! on strongly agree with this!

I agree all plugins that can be decoupled from the core engine should be pushed to Unreal Marketplace.
But there’s a lot of hardcoded things in engine and build tool that assume they are installed and activated (these things must be removed and template C++ projects must be changed).