Notes - how do they work? 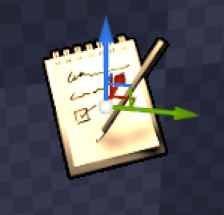 but I cannot find anything about it in google

how do they work ? why is it so cryptic to edit them ?

how do they work ? why is it so cryptic to edit them ?

Notes are a legacy feature mostly used for placeholders or spawning actors or holding TODO notes (unless something has changed in UE5)… There are better plugins around for TODO notes as well. That said, Notes are built-in and lightweight, so they have their uses (but remember a hidden / collision-less / unticked mesh offers the same kind of functionality).

Everyday uses… Using Notes in pairs as placeholders for quick camera anims (so you don’t have to write BP or resort to sequencer / matinee overkill). Note text can also be expanded using the Tags property to add more detail. So you can use Notes for prose or dialog as you fly though a level for example (good for prototyping). And as said they work as Todo notes.

What were you hoping to do with them anyway?

**BTW: **
Google is pretty limited for finding answers on UE (its better for Unity). Many answers for Unreal are behind Discord-walls and the forums are not what they used to be. So following links to the forums is often just dead time with threads like ‘Did anyone find how to solve this?’).

Most devs figure things out on their own by building BP test projects or scouring C++ source. This has always been the Epic way unfortunately and despite the forum upgrade it doesn’t look like Epic have invested enough in this Channel to change any of that imho.

well yeah todo notes, but how do I edit the text ?
with a billboard icon like that, it really looks like todo notes that would be linked to a text editor (even basic)

I got quiet a lot of answers recently,
certainly more than when the forum was hosted on that desert island it used to be

well yeah todo notes, but how do I edit the text ?
with a billboard icon like that, it really looks like todo notes that would be linked to a text editor (even basic)

Literally you click on the Note actor and go to its ‘text’ field in actor properties and type in some text (the properties pane is usually docked on the right-hand-side of the viewport).

But I hear you, the icon looks like it does a whole lot more, but its far more basic than that. Even a Text-Render actor would be more useful for what you want, as the text actually shows up in the level and you can change the font / material. There was a nice TODO list plugin on the Marketplace. Can’t seem to find it now but if you can it might be more useful.

I got quiet a lot of answers recently,
certainly more than when the forum was hosted on that desert island it used to be

The catch though is this… Its not so much about if you’re getting answers today. Its, will you get answers tomorrow when you really need them (when you’re close to shipping a game / actively supporting a project). If there’s no one around with experience you will definitely feel it then!

There’s plenty of activity on the forums right now with Epic having recently shipped UE5. The question is, will that draw some of the more experienced devs back who left this channel, or will things actually be pretty quiet again in a year. Do you see where I’m going with this???