Another thing I tried that didn’t work, guess I’m using each loop wrong?

Hi guys.
Been using ue4 for literally 3 days, but I’m not entirely new to coding and have experience with Python and such, but I feel like that’s maybe impeding me here.
I’m trying to remake a game I made in 2D in college, and so far I have my character set up to be able to move set distances to the left and right. 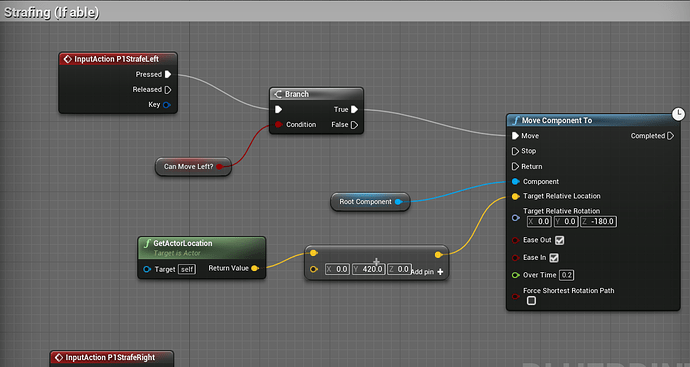 The character moves over walls, which the opposing player destroys, and vice versa. I need a way for the character to check if the wall to the left or right of it are broken, and then not allow them to move that way if so.
I’ve tried a lot of things, such as using tags and gameplay tags on a wall actor and then having a custom timer to repeatedly check if there is an actor with the broken_wall tag colliding with some box collisions attached to my character, and setting CanMoveLeft? (or right) to 0 if so, but it doesn’t seem to do anything. I’ve spent a lot of hours trying to do this myself but now I feel like I just need some help.

You can do a linetrace to the left and right of your character and check if the hit actor has the tag.

Thanks for getting back to me so fast, I’m giving that a go but I’m getting this error;
‘The current value of the ‘Hit’ pin is invalid: ‘Hit’ in action ‘Break Hit Result’ must have an input wired into it’
This is confusing, as I’ve copied what you’ve done exactly, and as far as I can tell, ‘Hit’ does indeed have an input, being the LineTraceByChannel… So i’m not sure what’s causing that?

Can you attach a picture of the nodes?