So I’ve been working on implementing a walljump feature into the third person blueprint over the last couple of days. As of now the feature allows the player to lunge in the horizontal direction of the camera and slightly upward by pressing space while touching a wall. The problem is that I can’t figure out how to add the following features:
-When the player touches a wall their character model rotates to face away from the wall.
-Touching a wall gradually slows down the players speed in every direction untill they’re only moving straight downwards however slower than before.
-If the player jumps off a wall while looking towards it their character is launched a little bit away from the wall.
-If the player holds Ctrl while latched on to a wall their descent will decellerate untill they’re hanging completely still on the wall.
-I would also like to create a custom movement mode for when the player is touching a wall in hopes that it might make future expansion on this system easier. I’ve seen people use custom movements in tutorials and whatnot although I have no idea on how to make one.

Here’s what I’ve managed to throw together so far: 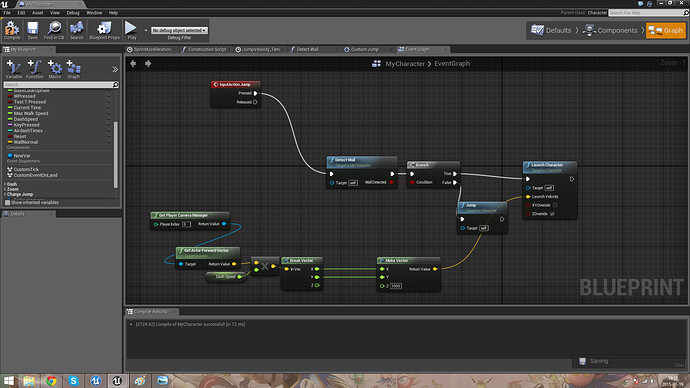 And here’s the “Detect Wall”-function:

Please keep in mind that this is my first ever project and I only have about a week-or-so worth of experience so please don’t assume I know anything beyond the functions of a couple of basic nodes.

EDIT: For reference, imagine the walljump in the Megaman X series except in 3d. Here’s an example: MegaMan X Engine (C#) - Updates - YouTube If you want to get a better feel for how it works I reccomend playing it for yourself.

Hi Rushiia! It’s Nicola here, i’m new as well to UE4, but i already made some experience on it (since it became free i downloaded it and started to use it). I’m doing a Third Person game, and as you i wanted the character to be able to do walljumps. The problem is that by surfing the net and seeing some videos and other threads it seems that the sphere trace for objects is unfortunately bugged. So there are 2 options avaible: the first one is wait until epic fix that, while the second one is to try to follow the steps that have been described here: [Blueprint] Wall Jump fail - Blueprint Visual Scripting - Unreal Engine Forums
i tried to do it, but the image links are outdated and in the video it doesn’t perfectly show how the “DetectWall” function ends, so because of that i wasn’t able to finish it and so to me it doesn’t work neither and i have to wait until epic fixes that because all of the other methods that i found online were refering ( as yours) only to the sphere trace for Objects

Thank you and bye!