How can I combine these two in UE4 so the character can blink eyes plus crossing arms at the same time?

and add slot… name it eyes or blink or whatever.

In the drop down above the magnifying glass… set the default group to the new slot.

that will tell the system you want it to loop.

Then… in the Animation Blueprint Event Graph
you need to add a way for it to play as the montage.
Such as a “Is valid” and a “Play Montage”
And simply hook it in somewhere… like this

now… your blink animation should running at all times… now you have to hook it into the animgraph.
like this

The slot will be whatever you named your slot before… like eyes or blinking or whatever.
then… select your layered blend per bone node and set the BONE you want your animations to blend at… 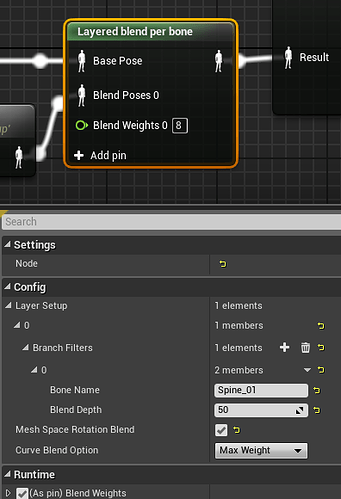 such as an animation of your guy folding his arms… or whatever you want him to do.

there is a really good 20 video Tutorial series HERE that might help you understand that a little better.
its not exactly what you are trying to do… but i feel like its close enough to get you there with a little imagination.

Thank you, Bajungadustin. I got it right away and my character looks fine now.

thanks for the explanation!
unfortunatly all your pictures are not shown.
Is there a way to solve this problem?
Cheers!