Hey Tarr_bot.
The answer would be yes, and then again, no.

I am trying to make a semi-direct control system, yes.
No, it has nothing to do with space or underwater (which is actually a great idea for an E.V.E. clone, someone point me towards a decent venture capitalist), but rather with traditional naval combat as a corner case; but at its core is the idea of a character, instead of a spaceship, being thus controlled.

This means that EVE functionality (orbiting and waypoints) is a necessity, but not the final result.
And I rather think I’d have to design a rudimentary AI for this (different path-finding algorythms), but that’s just haf the fun. Other half comes in designing the system in such a way that it still can be played effrectively by multiple players (happily, that has mostly been pioneered).

I can talk about this at length in private or public, if you like.

Upd: the main bug with 4.8 is fixed internally and hopefully the fix will be released in 4.8.1 hotfix

The transition to 4.8 is going to be delayed, most likely until the first hotfix. It looks like there are a couple of serious bugs in 4.8 :(:

How should one go about making a less direct control sheme (i.e. something they have in E.V.E. Online?) movement-wise?

In EVE Online you can send ships to orbit around something, is this what you’re looking for? For that, just send the orbit target from the client to the server and let server handle the orbiting. In any case, to implement any special kind of controller you first need to know how to do it in a single player UE4 project. Once you can do it in single player mode, adding networking or adding the controller to the MMO kit should be easy.

Did they say when that hotfix would be available?

Since Epic is now able to release c++ projects / plugins, any chance for this to hit the marketplace? Or… is there a chance to release the various “systems” that are in play as plugins?

i just tested your demo and i have few suggestion

1 - add character creator screen same as this link ( https://www.youtube.com/watch?v=fEphUHrtjm4 )
2 - fix the chat Unicode problem it wont support Arabic you can try with this word ( تجربه )
3 - when i fall down no damage taken also when i jump to water it wont swim
4 - Pressing ( TAB ) to switch between 15 meter targets
5 - auto rotate to fight the target
6 - make new NPC enemy that auto attack when you get 5 meter near them

these would make your source very powerful

Since Epic is now able to release c++ projects / plugins, any chance for this to hit the marketplace? Or… is there a chance to release the various “systems” that are in play as plugins?

Could you link me this info please?

i just tested your demo and i have few suggestion

Thanks for the suggestions, several of them was already on my ‘planned’ list.

They are not hard to implement yourself though, especially p.4, p.3, p.5.

Plugins now accepted - What do you need? - Unreal Engine Forums

Good news - the main issue I had with 4.8 has been fixed internally and the fix will most likely be in 4.8.1 hotfix: Game crashes on start - UE4 AnswerHub

That thread is not by a staff member. On the official page (https://www.unrealengine.com/marketplace/marketplace-submission-guidelines) it still says that code assets will be accepted later. Personally, I’m fine with selling on Sellfy for now.

is there any update on your starter kit?

is there any update on your starter kit?

The update containing quests is ready, I’m waiting for 4.8.1 hotfix to release it (because of [4.8] Assertion failed Result->LinkerLoad - UE4 AnswerHub )

Good news - the main issue I had with 4.8 has been fixed internally and the fix will most likely be in 4.8.1 hotfix: Game crashes on start - UE4 AnswerHub

That thread is not by a staff member. On the official page (https://www.unrealengine.com/marketplace/marketplace-submission-guidelines) it still says that code assets will be accepted later. Personally, I’m fine with selling on Sellfy for now.

An Epic dev responded in the thread

Currently,it seems that Epic is still beta-testing the entire plugin feature of the marketplace (see the Substance Plugin) to make sure it works, however, in some of the Twitch videos, they have stated that plugins and C++ will be coming to the launcher during the 4.8 cycle.

I just had to buy this, now i gota get it going

Thanks for the heads-up just updated the engine! now to toss this page onto my tv screen and set a auto-refresh to see when this kit gets updated

I cannot get past the login screen. After I register it just goes back to the Login page, and when I login, it just tells me that I logged in. Any suggestions

Checking this forum every 10 mins for the update…

CodeSpartan do you have a basic idea of when you will bring out the new version?
I am holding off doing to much work on the old package that I bought a day ago as it will make my migration easier to do it in 1 hit.

Everyone reading the forum, This package is brilliant and has helped my tiny team along months.
Thanks CodeSpartan another happy customer.

Hi CodeSpartan. Do you have any plans to get this into the Marketplace? I am interested in purchasing your package, but I am hesitant in going through 3rd party markets, as I would rather have the surety - so to speak - of content hosted in the Marketplace of the engine that this is so specific to, especially since it is blueprint-based.

Also, I would like to create a roguelike game based on combat that takes place on a more real-time scale, similar to Dark Souls in that players will have two hand slots to equip items, two different mechanics for each item equipped (so for example, a shield can block by holding down the right mouse button, and a click will instead launch a shield-bash of sorts), and area/collision-based combat rather than target-based combat as it seems your kit follows. I suppose an extremely simplified version of Diablo 3 and procedural dungeons is the best way to put it, but in MMO form.

I would also like to know how you handle instancing and moving between areas. So if I were to suddenly spawn a door to an instanced and randomized dungeon, would that work well with your current structure? Or would that take some modifications to the server side to get that working?

I realize that creating something different than what you have out of the box may take a considerable amount of time, but I am greatly interested in purchasing your kit to save time and development costs.

The new update is now live on the demo server! I plan to upload the public build to Sellfy tomorrow, meanwhile you can log in and check out the new features. 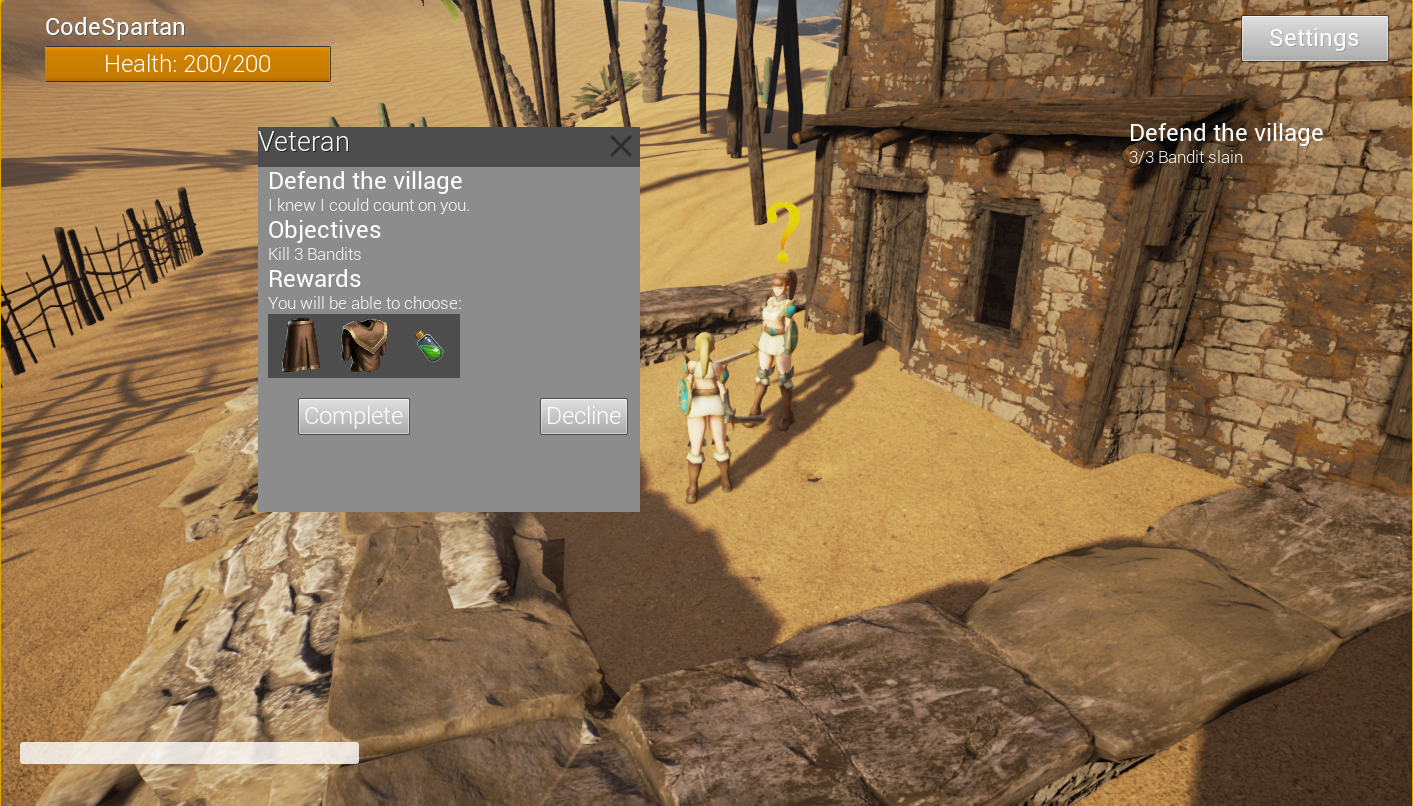 Quest-giving NPCs can be placed in the world, offering quests to the player. Each quest can have several tasks. There are “talk to”, “kill x enemies of certain type” and “bring x items” tasks available.

Regenerates a portion of health every x seconds if out of combat.

Use it when the character walks off the edge of the map, etc to teleport to the starting location. Removes the need of manually fixing the character’s position in the database.