There seems to be some oddness on iOS / mobile preview when using the “Absolute World Position” material node.

I am using it in the most common manner - to map a texture to the world like so:

If you try to use “Absolute World Position (Including material shader offsets)”, then it works on PC / mobile preview but on the iOS device it appears to be scaled and offset (and has a seam), like this (note the dirt and shadows): 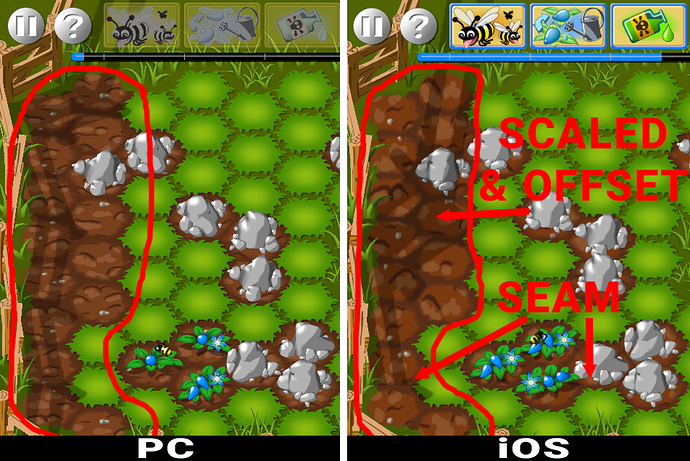 If you try to use “Absolute World Position (Excluding material shader offsets)”, then it doesn’t work at all (you just get a flat color).

Is there some expected limitation to this node on iOS? If I’m using the “(Including material shader offsets)” option, is this “sharing” the coords between shaders somehow? Like we can only have one manipulated world coord in use at a time or something?

I can reproduce the “Excluding material shader offsets” (flat color) problem in a blank project (has always been like that). But I can’t reproduce the seam/offsets I’m getting with the “Including material shader offsets” option in a blank project, which is why I wonder if other shaders using the world position coords are affecting it somehow (also, the exact same world position nodes can produce different coords in another material).

Note, I made a proper bug report for the “Excluding material shader offsets” one.

Small update - I’ve had some success in getting rid of the scaling issue with a workaround (the seams are still there, though). That is, I put the worldposition coords through a Custom UVs slot so it’s getting it per vertex instead of per-pixel (slightly worse off for performance because I was already offloading some heavier stuff through the Custom UVs, but at least it seems to fix the scaling).

If I had some idea why those seams are occurring, I might be able to find a workaround there too, but no idea yet (offsetting the coords doesn’t appear to move the seam).

Another small addition: The seam does not appear on ES3.1 devices, only on ES2.