This was my second ludum dare (finishing) with UE4 !

I just wanted to reflect and share some of my thoughts with the community. I think this is also my first post to the forums (I usually whinge on answers pestering about a bug, or a lack of update about tickets which we have no visibility on!)

Making a game in 48hrs is no small ask, but I feel I did a pretty good job with this one. I have used many engines, UE4 being the largest one, and I’ve attempted to make games from scratch as well. UE4 actually is a pleasure to reopen every day and chip away at the next thing.

The theme was “you are the monster”, which in retrospect, was better than I first anticipated. That said I would have preferred “expanding worlds” or “in the skies” to go through as they lead to a wider gamut of games. A good theme in my opinion is one that works in 2d, 3d, 2.5d, etc. It should work in 2 colours, 8bit, whatever. And at least, “you are the monster” did work in that regard. It lead to the expected Murder everyone or hurt the innocents type of games. Some games were very much inspired by Monster’s inc., walking in a child’s bedroom and scare, which was pretty fun.

I went with a classic gameplay of dungeon defender. You’re a monster, you’re looking after the dungeon and all those pesky adventurers (which ended up being knights for whatever reason) attempt to steal your gold! The twist is that you have to eat them from behind. They carry a sword, you see, and if you walk in front of them they will hurt you! Being hurt results in a loss of heart; 4 strikes and you’re out, game over. Hearts should respawn around the place, so you can revive, should you live long enough

The first day went like this… Think about what I’m doing, get a mood board together from stitched up images from Google Image, start modelling bits, uv unwraps etc. some renders in Blender, pop stuff into UE4 and get basic lighting in. Did the textures using the wacom in Photoshop, brought over to UE4 (nearest-neighbour filtering textures rock). And finally did a lot of the blueprints basic movements etc. When I started to faint, 12 hours in, I did the music in Renoise using some VSTi. The second day, I did, well, everything else. When you get down to the UI, man, it feels good and drudging at the same time. You really feel the pinch the second day. It’s less funsies with gameplay and more dealing with bugs and making everything smooth.

Of course not everything went perfect. 48 hrs is a harsh mistress. You have to make some tough calls, between sleep and features. Constantly focusing on to the next thing, you have to make sure you hit the deadline with at least a game. So I didn’t get funky stuff like voice over done. The swingarm thing gave me some grief, as I wanted it to be fixed but the character to turn. I had planned to have the uncle monster teach the nephew monster with some sort of voice over tutorial as you play. UE4 really unleashes your potential and it’s a lot about you and what you can get done in a short amount of time. A more basic engine would require you to do a lot more coding. With unreal, I feel I have a shelf full of options and I have to make the calls.

I had wanted HTML5 to work. And I tried. Boy, that stuff isn’t quite as good as it’s advertised, I feel. For starters, the doco… is a bit of a shame. I couldn’t get dynamic lighting to work at all, nor loading levels (or was it the mouse? not sure!) - either way, I stuffed around for 2 hours all up getting it to work, to waste more time finding out everything that’s wrong with it…

Now look, I have no issue with something being a work in progress or downright experimental. After all, translating to webgl using emscripten, I wouldn’t even expect it work at all (I’m a software dev with 14 years in the pit). My issue is with the claims of having an HTML5 target, and the lack upfront statement about what work and what doesn’t. I discovered most of it, going through the answers of people confused. I’m glad they asked though or I’d still be trying to make it work. In my opinion, the wiki page that tells you how to get HTML5 working should do more than telling you “Warning, rough edges”. It should just lists everything that is known to work and not work, so that people don’t waste time installing the wrong version of emscripten, to then install 1.29 and to then find out later their scene is mostly pitch black. On the plus side of HTML5, the performance were fine on a 32bit browser for me. I do hope that HTML5 makes it in the end as it’s a massive boost to anyone doing jams. Overall I’m very impressed that the compile works at all and it runs quick!

There is also the fact that, due to the popularity of UE4, the answers site is getting quite large with an unanswered pool of (valid) questions. When I first started using UE4, the problem was that you wouldn’t find what you’re asking for. Now you find it, but it’s unanswered or sometimes the answer is a waste of time and the solution is much simpler. I try help when I can - but overall it feels the site is overwhelmed. I really appreciate the work that Epic has done though, that site is a gold mine of information. My advice to the community is upvote the right answers, and when you’re bored, go through it and share your knowledge by answering. I found answering some people’s questions made me lookup some doco and improve my skills with UE4. At the moment there are too many answers of “hey, try this random thing, it worked for me”, and it doesn’t work.

Ludum dare is a tough competition, particularly the compo. I’d recommend all of you to give it a shot. It’s exciting, creatively fuelling and invigorating. Doing everything including textures, sounds, music, UI and gameplay in 48 hrs, I don’t know of any other competition in the world that is that demanding and rewarding. This is my 3rd time entering and 2nd time finishing.

If anything, one thing I’ve learnt is to pace yourself. The first time I entered I didn’t finish. I overshot the first day, worked my head off and I completely blown over the 2nd day. Then I was in the weeds, and I couldn’t get music or menus done within the deadline. Scope has to be very fluid. Strategy games, for example, are a bad choice. I had tried to do a mini transport tycoon in space for “connecting worlds” and that failed miserably. If you think the one month compo is hard, try Ludum Dare!!

The one thing I take away from this time, is that I need to do more play testing. The game I produced in the end ended up too easy. That’s because while I was developing it, it was too hard. Enemies flooded the dungeon, took over the place and I felt I had to tone it down a lot. So much, that I over-toned it down. Small mistakes like that impact the fun. The game does get harder and harder as you play it, but I might have made the progression too slow for the time people allow themselves playing (and rating) the game.

So it’s all there: Link to ludum dare page - including sources, 3D, all the assets etc. It was entirely done with blueprints.

To finish, I want to thank the Epic team and to say that I love UE4 so much that I’ve dropped my software contracting business down to 1 day a week so that I can make indie games 4-5 days a week. I hope to be able to ship commercially viable games soon. I feel this industry needs more indie games. I certainly enjoy playing both AAA and indie games, but as I get older I tend to play more indie games… Easier to pick up and put away, less demanding and equally as rewarding - they remind me of my childhood and the essence of fun.

I’m on twitter @keyle so get in touch if you’re like-minded. I do almost daily streams on twitch/keyle. Thanks for reading and keep up the good work! 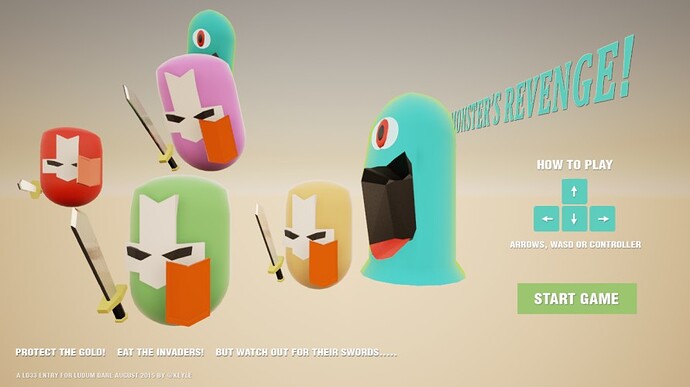 Looks good, but how big of an event is the Ludum Dare? It sounds interesting.

It is quite big, I participated too, but the infamous descriptor file error got the worst of UE4 and my game is not working ._.

These days, over 2000 participants. I’d suspect many enter and don’t finish so it’s probably over 2000. There are also events around the world, with locations where people join in, work together towards the deadline. Here is the wiki page which shows the growth.

That is insane, though lately I am too busy to do another game jam. 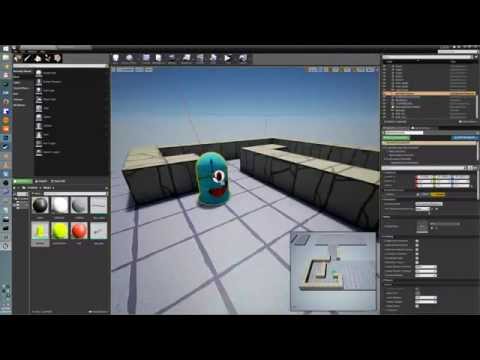 Awesome, but next time I suggest you render @ 60FPS

Great idea with the time lapse project! I was thinking doing a Ludum Dare but there is just soo much competition. I’ll stick with Unreal Jams for the time being. Good job on your entry!