If I remember correctly (I lost most of my old scenes), I used colored spot lights and bounce cards to simulate the sky light and a Directional light that passes through the colored windows for the sun.

Where are you getting your information Koola? How are you so far ahead of everyone else with the lighting?

I often see a lot of complaints and critiques of ue4 for the lighting and how things always look glossy and or washed out but you completely destroy that myth.

Hello Koola !
I have a question for you, when you start creating a new substance, do you have a rule of thumb of how much meter your texture is going to represent ? Do you have a fixed texel density that you try to follow every time ?
Also, and I guess it is deriving from the previous question, what texture resolution are you using for your UE scene ?

Thank you very much !
Merci beaucoup !

Hello All !
Koola - it is really pleasure watching Your stuff - very inpirating. I have one question to You. How do You achive such quality of Your movie? You render via Sequencer separated frames ( 4k )? and make a movie in external program ( like Adobe Premiere) ? Be very grateful for Your answer.

Here’s a new scene inspired by the Educational Centre in El Chaparral (Alejandro Muñoz Miranda).
The fun part is that the doors and walls have no diffuse map, just a white value, all the colors come from the lighting.

I love this scene, I think the colors are tremendous. You mentioned above that you were using a directional light with translucent shadows and bounce cards for the windows. I’ve been trying to recreate this scene as a lighting study and it has proven immensely challenging. I simply cannot get the translucent shadows to be as rich and vibrant as in your example, I really don’t know how you achieved that result.

Here is a little breakdown of paved street in the rain I posted on twitter.

First, I created the textures in substance designer.
I just wanted to test the rain effect so I used the “Roman Street Pavement” substance from SubstanceSource as base (https://source.allegorithmic.com/#/s…ce7678a2747f0a). I simply plugged it in a “water level” node to make a wet version.

For the water ripples effect, I used a substance from Nicolas Wirrmann (http://polycount.com/discussion/comm…omment_2294007) for generating the normal map.
I haven’t found how to export a animation with substance designer so I exported 16 images and made the flipbook in photoshop.

Here is the material in unreal.

The scene setup is really simple, some planes for the floor, walls and the “street lights” (a night street photo plugged in the material emissive channel).
I used a BoxReflectionCapture for the reflection, a ExponentialHeightFog for a bit of volumetric fog and a PostProcessVolume.

For the lighting, It only comes from the 2 planes with the street photo (the lights are baked).

Then, you just have to add some rain particles (with this material setup).
The normal map used can be found here /Engine/Functions/Engine_MaterialFunctions02/ExampleContent/Textures/SphereRenderNormalsMap

Awesome! Thanks for sharing. I saw that on twitter and wondered about the ripples. Nice!

Once Again, Thank you very much for sharing

Beautiful work as always. It’s been a while since I’ve checked up on this thread. Appreciate the breakdown. =) 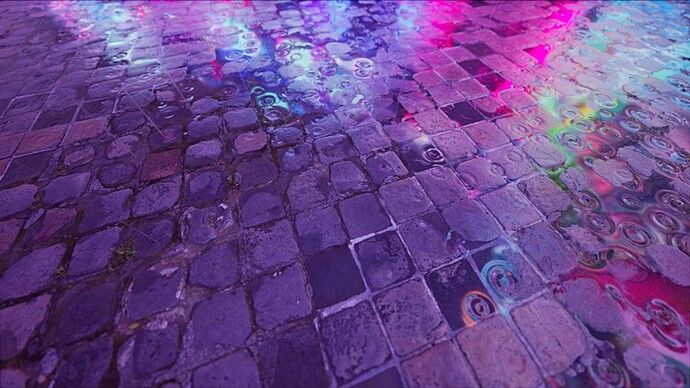 Here’s a new scene inspired by the Educational Centre in El Chaparral (Alejandro Muñoz Miranda).
The fun part is that the doors and walls have no diffuse map, just a white value, all the colors come from the lighting.

can any one tell me how they get this?? i have tried all kind of tutorials and tips but only ends up in a bad result

as a shoutout to Koola. Asserts from the snow Example was use widely in a level in my game. Thanks. 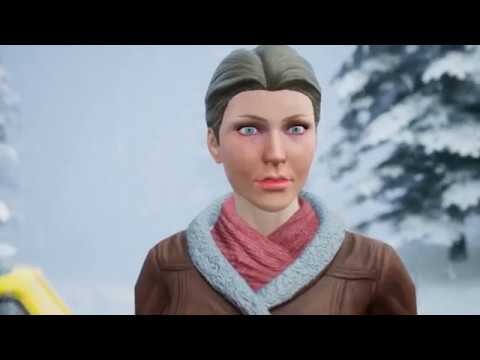 Very impressive Koola. Just one question; have you turned off filmic tone mapping? or its an LUT with extreme Red and Blue values. Because red and blue reflections from emissive background looks physically incorrect to me. Or its an artistic choice? By the way, great job like always.

Very impressive Koola. Just one question; have you turned off filmic tone mapping? or its an LUT with extreme Red and Blue values. Because red and blue reflections from emissive background looks physically incorrect to me. Or its an artistic choice? By the way, great job like always.

I don’t follow what you’re saying… His colors/lighting look correct to me, nothing looks “incorrect”.

I don’t follow what you’re saying… His colors/lighting look correct to me, nothing looks “incorrect”.

If you are familiar with realistic tone-mapping which is filmic, a red emissive color would not reflect or look complete red after tone mapping takes place. for instance go to material editor and create a simple emissive material with (10,0,0) emissive color witch is pure red. now if you look at it, it doesn’t show red, it looks orange and this is how realistic emissive color should look. if you increase the emissive intensity to even higher values, more and more it drops red to more subtle orange. In real world example you can take a look at melting metals. when metal gets red it has a low temperature while when it gets hotter it shifts toward more orange color. Now to test that, open up console and disable filmic tone mapping by setting it to 0 (by default it is on = 1). Now look at your emissive material again. it just looks pure red just like Koola example work. The same thing goes for blue … . If I remember correctly, filmic tone mapping is set to 1 by default after 4.15 release. And I didn’t say anything about lighting, just the way emissive reflections look.

You are the new Alex Roman for me. Truly inspiring. Please keep creating a great work like this.